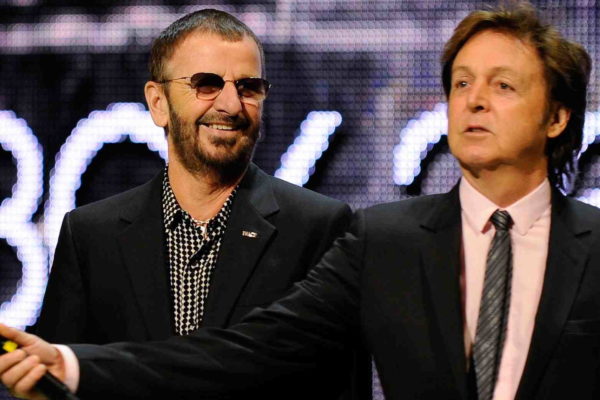 None of the Beatles were older than 30 when they broke up and they all had loads of music left in them. Though nothing could quite live up to the influence and quality of their initial collective legacy, their vast solo catalogs include many artistic, critical, commercial successes. For John Lennon and Paul McCartney, the new found freedom allowed them to explore more personal work; for George Harrison and Ringo Starr, the change-up put their individual talents in the spotlight. Here is an overview of each of the Beatles two best-selling releases proving that sometimes there are second acts (for those from Liverpool).

George Harrison’s All Things Must Pass (1970)
This was an artistic and commercial powerhouse and the one Beatle solo effort that matched the fanfare of the groups’ epic releases. Originally a three-disc vinyl box set, All Things Must Pass remains a watershed of George’s creativity which had been somewhat dormant while John and Paul were front and center. Many of the lyrics — including the title track and “My Sweet Lord” — are influenced by Eastern religion while Phil Spector’s Wall of Sound production adds power and depth to the album’s second best-selling single, “What Is Life.” The third disc is made up of instrumental jams highlighting the virtuosity of the backing musicians such as Eric Clapton, Jim Gordon and Billy Preston. (Total sales: Over 6 million units)

George Harrison’s Cloud Nine (1987)
George’s second best-selling album, “Cloud Nine,” came out seventeen years later, and was produced by another studio master, Jeff Lynne, who pushed George to levels of inspiration higher than he’d been in years. The album’s biggest hit was a remake of an obscure 1962 song called “Got My Mind Set on You.” Lynne’s George Martin-like production is evident, especially on a heartfelt reminiscence of the Beatles called “When We Was Fab” that features Ringo on drums. (Total sales: Over 1 million units)

John Lennon’s Double Fantasy (1980)
Although the album was released several weeks before Lennon’s murder, his untimely death brought an enormous amount of attention to this late work and pushed it up the charts until it became his biggest selling album. The album alternates between songs written by Lennon and Yoko Ono but the hits are all Lennon tunes, including “(Just Like) Starting Over,” “Woman” and “Watching the Wheels” whose lyrics eloquently address the contentment he found outside of the limelight. (Total sales: Over 3 million units)

John Lennon’s Imagine (1971)
Produced by Phil Spector, Imagine’s title track is probably Lennon’s most famous song. While Lennon’s 1970 album Plastic Ono Band explored introspective psychological insights, this release expands those concepts to more global themes like world peace. The LP also includes yet another strong ballad, “Jealous Guy” — a disarmingly honest love song. The track “How Do You Sleep?” is a diatribe against Macca that underscores the album’s message of harmony and brotherhood. (Total Sales: Over 2 million units)

Paul McCartney’s Band on the Run (1973)
McCartney’s undisputed masterpiece conveys a sense of joy and playfulness right from the album’s opening title track then on through “Jet” and “Bluebird” — a ballad that rivals “Blackbird” from his days with the Beatles. The pub sing-a-long “Picasso’s Last Words” were written as an on-the-spot challenge by Dustin Hoffman while Paul was on the set of Papillon. Interestingly, Band On The Run was released as a Wings project but the only other musicians are wife Linda and Denny Laine. (Total sales: Over 3 million units)

Paul McCartney’s McCartney (1970)
Paul’s first solo album is as laid back as the Beatles albums are structured. It opens with a short tribute to his wife, “The Lovely Linda” followed by the country blues-ish “That Would Be Something” and “Mama Miss America” an extended jam with Paul playing all the instruments. In” Teddy Boy” the lyrics explore the trials of a teenage boy in the 1950s. The big hit is of course “Maybe, I’m Amazed” — another declaration of his love for Linda that includes all the elements of a great single, including a fake ending! (Total sales: Over 2 million units)

Ringo Starr’s Ringo (1973)
Ringo’s solo career was at its height in the ‘70s, highlighted partly by a series of top-selling singles from his eponymous release. The biggest hit here is “Photograph” which he wrote with his BFF George Harrison. A great “break up song,” the lyrics are delivered by Ringo in his one-of-a-kind direct yet emotive style with great production from Richard Perry. The album also includes the nostalgic “You’re Sixteen” and “I Am the Greatest” — a John Lennon composition that he wrote for Ringo. (Total sales: Over 1 million units)

Ringo Starr’s Goodnight Vienna (1974)
This next effort was not as successful as Ringo but it still sold relatively well. It features another nostalgic number — the Platters’ “Only You” — but is likely most memorable for the “No No Song,” an anti-vice song, ironically recorded years before Ringo adopted a clean lifestyle. Special bonus: A fun Elton John/Bernie Taupin melody entitled “Snookeroo.” (Total sales: Over 500,000 units)

39 comments on “Two by Four: Best-Selling Albums from Each Beatle After the Break-Up”