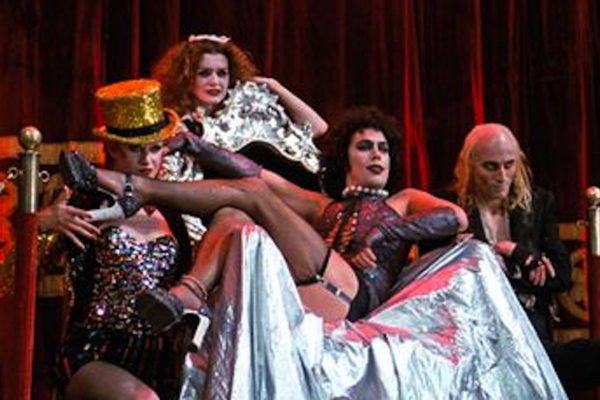 When Ryan Murphy hit the ratings jackpot with Feud on FX, he achieved something more than brilliant casting and jaw-dropping period design porn. He brought camp into American living rooms with the sly ferocity that the art form demands. Camp is the intersection of worship and blasphemy, where the absurd and the grotesque aren’t deviations but the norm, where outrage and outlandishness are just starting points. Camp can be terrifying, mortifying, vicious, even inadvertent, but one element that links all camp is association with a cult of followers who appreciate individual achievements with a devotion that is, itself, a form of camp. Not every cult flick is camp — if so, Star Wars would reign here as nearly everywhere else — but the camp audience comes from the underground where camp classics are created or exhumed. It’s in the very term: here, “camp” doesn’t refer to s’mores and bug repellent, it refers to “our group.” In honor of Pride Month but not limited to the Pride audience, here are five camp classics with which to whet your appetite, and sometimes choke on.

Camp goes as far back as Roman theater, but modern camp emerged from the turmoil of the ’60s underground, when the venues for old films were decrepit movie houses and church halls. Scratchy prints of pre-code shenanigans and fifties melodramas gave camp its signature reverence for faded glamour, which the audience took further by inhabiting it with thrift store wrongness and acting out scenes as they flickered onscreen. Early camp sirens included Jean Harlow and Ruby Keeler, but the undisputed Empress of Old Movie Camp was, is, and ever will be Joan Crawford. Almost any Crawford picture qualifies, but the apex of Crawford’s career phase as the world’s most silken monster is Harriet Craig. Watch as Crawford in a severe Bryl-creamed hairstyle that’s more barber shop than beauty parlor runs a home flawless and soulless, its ice-cold perfection the perfect setting for the contempt to which the leading lady subjects everyone and everything, from her own husband to the audience itself.
[amazon template=right aligned image&asin=B008BFSMBA] Parallel to Crawford’s villainy, as Hollywood’s leading ladies aged, the film industry placed them into caricatures that came to be known as hagsploitation, a sexist term for a sexist act. Hagsploitation is Grand Guignol, the art-form of overwrought savagery. The excesses of Grand Guignol found a stranglehold in silent era overacting, but its most famous achievement is Whatever Happened to Baby Jane, revered by contemporary audiences for its black humor but at the expense of the true horror underpinning the cringes. Grand Guignol is meant to be harrowing, another hallmark of camp, and as such there is no campier film than Die! Die! My Darling! If your blood doesn’t run cold at Tallulah Bankhead, the most outlandish of actresses and perhaps the most gifted, pushed into a Christian zealot’s severity and insanity, then genuinely horrifying moments of hostage punishment and torture should. If that doesn’t jolt you, witness Tallulah rolling around the abyss of loneliness with no comfort but a teddy bear and a contraband bottle of whiskey and then just try to sleep that night.

While the ravages of faded glamour define ’60s camp, in the ’70s, society exploded in every way from civil rights to Watergate, and the art-form exploded in response. The Midnight Movie phenomenon grew from the old movie shows of the ’60s to encompass the grindhouse culture of porn and violence. No auteur more wrestled camp to position ’70s film history as the decade that broke through than John Waters. Pink Flamingos created shock cinema in a way that relegated regular-ol’-snuff to straight-to-amateur status. As with his influence Herschell Gordon Lewis, Waters creates a determinedly trashy world. He then positions his great star Divine to rip it to shreds by careening from one brutally vulgar moment to the next: the short list includes arson, lynching, bestiality, incest, cannibalism, a gaping sphincter, and, yes, dog poop. The lasting achievement of the ultimate midnight movie is as equal parts historical document and prophesy. Pink Flamingos resonates with its manifest to appall and delight, agog with the true shock of a cultural cornerstone whose leading lady is an obese drag queen who, even from the grave, drags the audience to the realm of film anarchy.

Over the top performance is the centerpiece of camp, and where Divine trampled performance Tim Curry towered over it, while wearing just as much makeup and even higher heels. Horror and glamour have yet to collide with such impact as The Rocky Horror Picture Show. Rocky Horror is based upon a small rock musical, itself the heir of the phantasmagoria of Tommy and Ziggy Stardust, that found its fishnet foothold as the play-along fantasy of the midnight movie screen. Rocky Horror is glitter not gutter, outrageous but not outraged, perverted but not perverse. It is an homage to the schlock double-features of the drive-in, a pastiche of B-picture sci-fi and Scooby Doo fright. In Frank N Furter, Curry created an icon of icons, a touchstone of camp propelled by Mick Jagger’s strut and Freddie Mercury’s glam. But while The Rocky Horror universe revolves around this magnificent creation, the film is an ensemble piece of such largesse that it includes the audience, whose cult maintains its collective identity as the most devoted in fandom with a level of fetish that is, itself, a definition of camp.

Perhaps most entertainingly, camp can be inadvertent. While it is an easy target to label any bad flick as camp, for a bad flick to qualify as true camp, it must achieve a mastery that is sincere in execution but collapses in performance. Hardly a more magnificently, unknowingly terrible movie exists than Showgirls. Paul Verhoeven is far from a hack, but he is a straightforward filmmaker, about as subtle as Sam Fuller, and it is in its earnestness that Showgirls sinks and then drowns. In failing in its intent to tell a rags-to-riches morality tale, examining sexism by centering the story on the trope of the ornamental female and then placing her in Sin City, Showgirls delivers a level of trash that can only proceed from sincerity. Verhoeven’s Vegas is meta, a shadowy world of titty bars and ruthless competition, where achievement is marked in neon and respect equates to the lavishness of your hotel suite, but the honorable truth is found in a fast food burger. There is something to wince at in almost every frame: the title character pulling a shiv not one minute into the film, show sequences of jaw-dropping vulgarity, a food-sex conversation about dog food. But the ultimate camp of Showgirls is the mind-bending awfulness of its dialogue, delivered without a trace of irony that makes “ain’t you got no shame?” the campiest line in film since Bette Davis told us to fasten our seat belts. Showgirls unfastens our seat belts, and is a camp classic for being the car wreck that ensues.

0 comments on “Five Films: The Worship and Blasphemy of Camp”