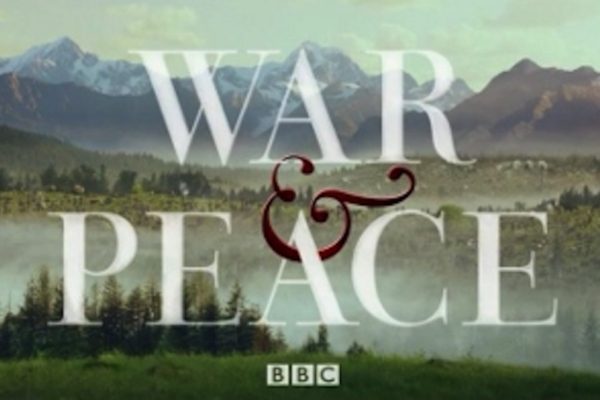 I have never attempted to conquer the nearly 1,300 pages of Leo Tolstoy’s classic novel War and Peace. But I did just conquer the six-hour War and Peace miniseries that aired on A+E Networks (A&E, Lifetime and HISTORY) – and I loved it. If you are ignorant about the plot of the book (as I was), it centers on the years 1805 through 1812 in Russia and follows the impact of the Napoleonic Wars on five aristocratic families. The epic story has familiar themes: love, loss, lust, jealousy, bravery, the struggle against class structures, the journey of finding oneself, and of course, living in times of war and peace.

The list of characters is quite large, but pretty much everyone was well cast in this adaptation. Paul Dano (of 12 Years a Slave and Little Miss Sunshine) plays Pierre Bezukhov, the illegitimate son of a count who inherits a massive fortune but has an endless need to find fulfillment and purpose in his life. James Norton (who stars in Grantchester on PBS, another favorite) is Prince Andrei Bolkonsky, an unhappy young man who leaves his pregnant wife to look for glory on the battlefield. And “it” girl Lily James of Downton Abbey and Cinderella fame plays Natasha Rostov, the beautiful daughter of a generous nobleman who is looking for love and ends up in the orbs of both Bezukhov and Bolkonsky. Other recognizable names in the ensemble include Gillian Anderson, Jim Broadbent, and Greta Scacchi.

The production value of this miniseries is also top notch. Principal filming took place in Russia, Lithuania, and Latvia. The latter two are now on my travel wish list (the sweeping landscapes looked absolutely beautiful). Scenes on the battlefield were realistic and terrifying, while scenes involving upper society were lush and colorful.

War and Peace was produced by BBC Cymru Wales and directed by the up-and-coming Tom Harper, who did a phenomenal job. I imagine he will have a lot more material to choose from going forward! Veteran scribe Andrew Davies (who wrote the 1995 miniseries version of Pride and Prejudice, my all-time favorite, as well as created the excellent PBS series Mr. Selfridge) more than rose to the challenge of condensing the book and its mammoth plot and characters into easy-to-follow, easily relatable episodes. I enjoyed the dialogue, as well as the grand statements throughout the series. “As long as there is life, there is happiness. There is a great deal, a great deal still to come,” declares Pierre Bezukhov.

If you couldn’t tell by now, I am definitely a sucker for period pieces. But this one has stuck with me, made me think, made me curious. You can catch it for free on Lifetime “on demand” through April 16th. In the meantime, I’ve resolved to start reading my copy of War and Peace that my husband just got me for Valentine’s Day. Wish me luck.

PS. If this gets you in the mood for other period pieces, we’ve got you covered. Check out Just In Case You’re Following this Little British Series for a look at the final season of Downton Abbey. Great Houses and Not-So-Great Families Revisited profiles a new novel about an upper-class English family thrown into turmoil during World War One.  And for an entertaining parody of Dickens courtesy of BBC Radio, check out Nothing Bleak but the Title.

0 comments on “Better than the Cliffs Notes: “War and Peace” on Cable”