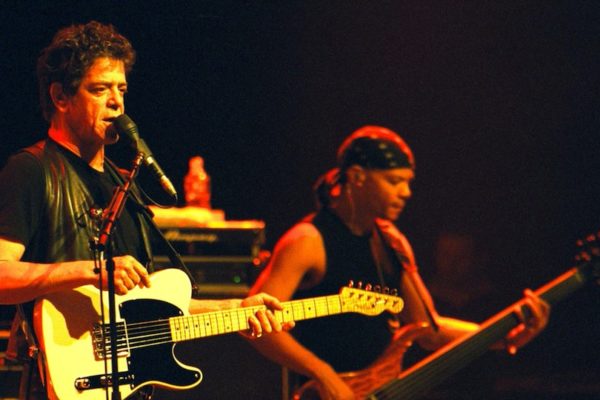 Whether one loves Lou Reed or thinks he’s profoundly overrated, there’s no doubt he’s among the most influential songwriters in the (still) short history of rock music. Sensible people may disagree whether that influence is positive or not, but that’s a debate for another time. What’s not debatable is the key place the 1989 album New York holds in his body of work. Though a quarter-century worth of gentrification and Disney-fication has made some aspects of Reed’s New York City historical artifacts, his reportage still hits hard and much of it remains all too relevant. The conviction Reed brought to the album was clearly not a one-off endeavor, as shown by the recently released 1989 live recording New York in LA. Though the sound quality leaves a bit to be desired, especially on some of the softer songs, the quality of Reed’s performance is – to borrow the title of one of his lesser-known songs – what becomes a legend most.

Though this live album omits a few key songs from New York, fortunately, its opening and concluding songs are both here. In their own ways, each gets to the heart of Reed’s artistry and contain some of his best lyrics. “Romeo Had Juliette” tells its story of star-crossed lovers against a backdrop of urban decay and pithy observations including “I’ll take Manhattan in a garbage bag with Latin written on it that says ‘it’s hard to give a shit these days’.” “Dime Store Mystery” reflected on the still recent passing of his former mentor Andy Warhol, who was perhaps star-crossed in his own way. Throughout the song, the subject and narrator become intertwined such that by the time Reed intones “I wish I hadn’t thrown away my time on so much human and so much less divine” it’s unclear whether the perspective is Reed, Warhol, or both. Nor does it particularly matter. It’s a powerful ending to the New York album in which ambiguity was probably the point.

Admittedly, it also makes the songs that follow it on this live recording seem a little frivolous in comparison. Taken on their own merits, though, they all reflect well on Reed’s career. Two decades on from Loaded, “Rock & Roll” still felt like a statement of purpose than a golden oldie, and there’s joy to be had in his 1984 song “I Love You, Suzanne.” As for the old standard “One For My Baby,” on the surface, it may seem an odd choice of covers for Reed, but it says a lot about his respect for the craft and tradition of songwriting (whatever the subject matter might be). In short, while New York in LA may not be a definitive Lou Reed recording, it’s still a satisfying snapshot of an artist at his peak.

PS. While we’re on the subject of great albums, check out our post Steely Dan’s “Aja”: Eight Minutes of Genius, where we deconstruct the title song of a still-masterful album.