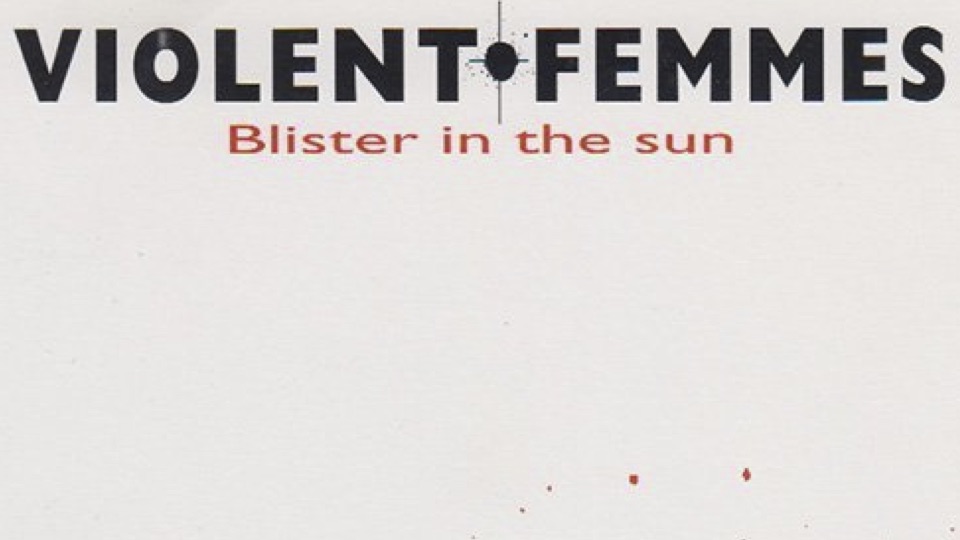 This post, from 2020, sparked a lot of commentary on our social channels — so it seemed a good time to revive the conversation. It is, after all, a memorable title…

There are very few songs that are as identifiable from their opening riff as “Blister in the Sun” by Violent Femmes. While not an outright hit when it was released in 1983, the song has become so identifiable that you only need 4 notes to recognize it. The track is off their self-titled debut album, (which has a few other gems on it including “Gone Daddy Gone” and “Kiss Off”) which was released on Slash Records and written by frontman Gordon Gano when he was just 18 years old and still in high school.

Related: “Do You Hear Me?: An Appreciation of Missing Persons”

Gano had met a woman who was putting a new band together and he was excited to audition for them. Instead of showing up empty-handed, he decided to come with a song and sat down to write “Blister in the Sun.” While the audition didn’t happen, the song would go on to be the most popular staple in the Violent Femmes repertoire and also explain why Gano has stated the song was written from a female point of view.

The band formed in 1980 in Milwaukee and was discovered by James Honeyman- Scott of The Pretenders when they were busking outside the Oriental Theatre in 1981. They would record Violent Femmes in July 1982 and release the album in April 1983. The album didn’t set the recording industry on fire and only charted on the Billboard 200 in 1991 where it peaked at 171. The song and that first album however would allow them to keep recording and make a career out of it. To date, the group has done 10 studio albums though none have charted higher than 84 on the Billboard 200.

The sound of the group in the ’80s was often referred to as alternative and they have been given credit for helping to launch a folk-punk movement. The punk in their songs tends to come from the honest lyrics of Gano who was writing from an 18-year old’s point of view. While it might not be the abrasive instruments that lends the punk attitude to “Blister in the Sun,” the catchy music and drums da-dum, da-dum make it irresistible, which explains why you constantly hear it at sporting events to pump up the crowd. I’m reminded of something Dave Grohl once told me, “When I hear ACDC’s ‘Highway to Hell’, I want to break something” and the same can be said from the feelings invoked by “Blister in the Sun.” When you hear that opening riff, you need to stand up, bounce your head to the beat and feel like you want to pump your fist in the air. It also helps that in the middle of the song Gano drops his voice to a whisper before bringing it back up on “Let me go on…” How do you not feel like this is what rock music was invented for?

Whether you know what the song is about or not, it has lasted the test of time. Written by a young high schooler, launched to little fanfare and still confusing people when they sing it (I admit I thought he was saying “Like a Blister in the Sun” when in fact Gano is singing “Like I blister in the sun”), “Blister in the Sun” is that head-bobbing, foot-tapping alt-rock song that can still pack arenas as is proven by the band’s planned tour (hopefully) this year.

1 comment on ““Blister in the Sun” Is Really About…”