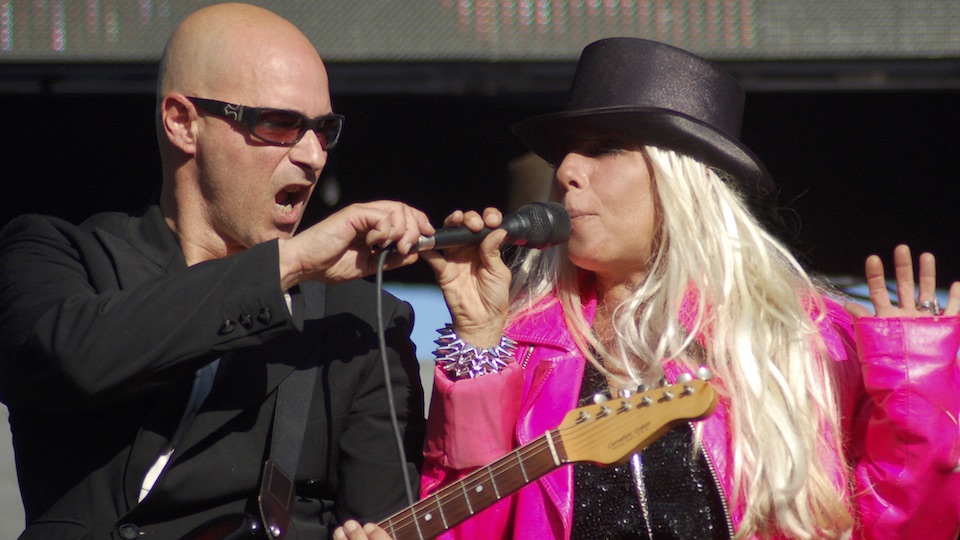 When you look like cotton candy, perhaps it is inevitable that you be treated as such– disposable, confectionary, meant to disappear the instant after you’re consumed. Dale Bozzio, lead singer of the New Wave band Missing Persons, looked like spun sugar on a stick. The leggy former Playboy “Bunny of the Year” sported a teased mound of platinum blonde hair which was, like her face, streaked with shades of Day-Glo blue and magenta, a look that attracted viewers to MTV in the channel’s earliest days. And like candy, Bozzio came wrapped in plastic. She fashioned tuxedos from packing plastic and Scotch tape, she made outerwear bras from moss growers and aquarium tubing and filled them with water and live goldfish, and wore skirts that looked like solar panels. Records, translucent vinyl–there was little Bozzio couldn’t upcycle into a head-turning look.

Unfortunately, that look was decidedly Eighties, a category that has proven to be oddly purgatorial, a sentence of sorts for largely sartorial offenses. So many artists from that decade have been banished by the very culture they helped form and that continues to borrow shamelessly from them. Meanwhile, they’re made to wait for their due credit, hovering somewhere between obscurity and ridicule.

Related: “Not Quite Top 40 But Quite Important: ‘Rock Lobster'”

But it isn’t just Dale’s look that’s been dismissed as dated. Like a jazz singer would mimic the warm sounds of the brass in her backing band, Bozzio mimicked the cool electronic sounds of the synthesizer. Lest any quavering of her voice be mistaken for a lack of conviction, she eschewed vibrato to sing in straight, taut lines. Her voice was supple and elastic. She stretched lines like, “Do you hear me?/Do you care?” (on Missing Persons’ 1982 hit “Words”), like rubber bands, and let them snap firmly back into place, creating her own echo effect. She had been accepted into a drama program at Emerson College when she was just 16, and took to every last syllable like an actor takes to the stage– with presence, command, and precise elocution. With vocal clicks and chirps periodically punctuating her slightly nasal Boston accent, she sounded like a charismatic android, an ambassador to, or an interpreter of, the synthetic sound that would dominate the coming decade.

And it was the sound of Missing Persons, as much as Dale’s look, that culled a fanatic following from the tough crowds in New York, Los Angeles, and San Francisco, where Missing Persons’ shows were a must-see. Before “Mental Hopscotch” went to Number 1 on L.A.’s legendary KROQ station, it appeared on the soundtrack to the movie Lunch Wagon, Frank Zappa’s zany sex comedy in which the band appeared under the name “U.S. Drag.” Zappa had met fellow eccentric Dale in a deli in Boston, and she looked him up when she moved to L.A. to pursue acting. Her future bandmates, guitarist Warren Cuccurullo, and drummer (and future husband) Terry Bozzio, were both a part of Zappa’s touring band. The three of them appeared on Zappa’s 1979 rock opera Joe’s Garage, and he provided his Utility Muffin Research Kitchen studio for the recording of the band’s self-titled EP.

Most of all though, Zappa provided tutelage and guidance, an environment where exacting standards were never sacrificed to experimentation. It’s little surprise then that his proteges, later joined by bassist Patrick O’Hearn and keyboardist Chuck Wild, would take up this mantle, crafting intelligent, left-of-center songs that were just the right balance of quirky and listenable, even danceable. “What are words for? When no one listens anymore?” Dale asks, decades before anyone could dream that we’d be communicating mainly through emojis. The leading track on their debut album Spring Sessions M, “Noticeable One,” could easily be an anthem in this current age of Instagram and instant fame. “I am the noticeable one/Notice me!” she demands.

Dale once said that she and Terry started the band as a way to spend time together as a married couple, and their sound often plays like a friendly rivalry, where he sets a frenetic pace and dares her to keep up. “Walking in L.A,” perhaps their most enduring hit, takes off like a drag race between Terry’s drumming and Dale’s nimble vocals. She revs and growls like an engine as she races over lines like: “Shopping cart pusher/Maybe someone groovy?/One thing’s for sure he isn’t starring in the movies ‘cause he’s walking in L.A!” Other times that pace provides her the speed to evade the clutches of societal convention. “I’ll tell you right now, I’m committed to myself…I’m having fun/I’m looking out for number one!” she sings on “Bad Streets.” “No one will ever play chess with my life” is about as succinct as a declaration of independence and self-preservation gets in popular music.

Their mix between experimental and commercial would bifurcate on their subsequent records. Their follow up, Rhyme and Reason, took even more chances than their debut, (Cuccurullo even invented a new type of guitar called “The Missing Link” to play on the album) while their third and final album Color in Your Life demonstrated a keen pop sensibility. The latter album’s title track is cinematic, custom made to play over the closing credits of a John Hughes movie, signaling the band’s turn toward a more lush and expansive sound. Dale proved that underneath her vocal quirks lay a wealth of earnest emotion, like on the yearning “No Secrets.”

The entire album has a bittersweet, melancholy current running through it, a glimpse of what might have been. Soon after its recording, amidst tensions, the Bozzios’ marriage, and the band itself, came to an end. Missing Persons’ time together was brief but, even 40 years later, so very sweet.

0 comments on ““Do You Hear Me?” – An Appreciation of Missing Persons”