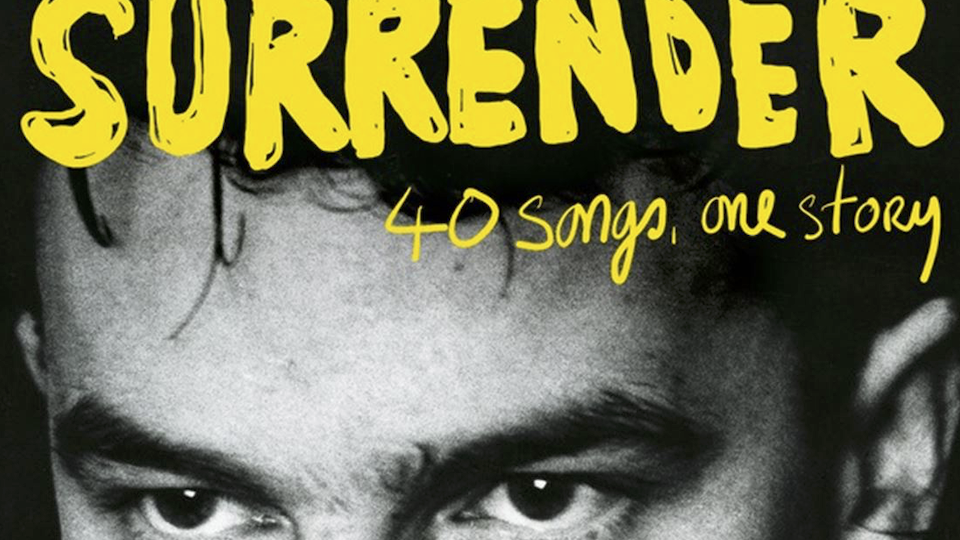 Considered by many to be the best rock band since The Beatles, U2 crossed that threshold as early as their inventive The Unforgettable Fire album. And yet for all their posturing, the four-piece boasted a beating heart, which might explain why they produced such yearning anthems as “With Or Without You, ”Lemon,” and “Miss Sarajevo.” On these cuts and elsewhere, Bono’s penchant for forthrightness and emotion was right up there with the ballads John Lennon and George Harrison had issued.

But behind these songs stood a more thoughtful person, burdened by the death of a mother and saddened at his deteriorating relationship with his father. The pain that sharpened and focused his songwriting made for a trickier personal life, but Bono was lucky that his marriage to Alison Hewson remains one of the happiest in rock. Indeed, Bono has declared his memoir Surrender to be a love letter to his wife, and it’s evident that her shadow stands as the most important in his life. In one of the book’s more impressive passages, Bono recalls his wedding day, illustrating the occasion through a series of tasty soundbites.

As a Protestant growing up in a country that was nominally Catholic, Bono’s experience of Ireland was shaped by an identity crisis and a troubled relationship with God. His journey was very different from Bob Geldof’s (another Dubliner who didn’t fit in with the country’s religious makeup, considering his Jewish heritage), culminating in a songwriting catalog that questioned the purpose of God’s existence, while constantly obeying it. U2’s second album October was shaped by Bono’s renewed interest in the Bible, a fascination that bandmates The Edge and Larry Mullen Jr. were only too happy to entertain. Restless and easily bored at their secondary school, Bono, The Edge, and Mullen Jr used U2 as their vehicle to escape from the rigid regulations Ireland spearheaded at the time. Only bassist Adam Clayton seemed interested in joining U2 for the sake of being in a band, which might explain why there was so much funk heard in the background of the first three albums.

Friendship was what fuelled the band, but for Bono, it was his upbringing that gave him a voice, particularly at a time when his pipes couldn’t muster the thunder he was aiming for. Surrender offers an insight into his writing process, but what the book exhibits isn’t context, but edification, as if suggesting that a hidden presence helped him to bring life to his compositions. Yes, he’s arrogant, but he’s not unaware of his critics, and even offers a mea culpa of such for the way Songs of Innocence was placed on everyone’s Apple device, without their consent.

His lust for glory was one he had to grapple with, considering his geographical environment, but while he was happy to chase after grandeur, his solid marriage saved him from embracing delusion, which has sunk so many rock luminaries over the years. If he wasn’t such a loudmouth, he might even come across as charming, but considering the banknotes that are rolling in as we speak (Bono boasts a fortune that’s obscene even by the industry’s standards), it’s not likely that he’s willing to engage in such tittle-tattle. But he remains as steadfast as ever to the music that offered him a sanctuary in the years after his mother’s demise, and with the promise of a new album, it doesn’t look like the fire, unforgettable or otherwise, is going to dim anytime soon.

2 comments on “Bono Finds “Surrender” In His New Memoir”