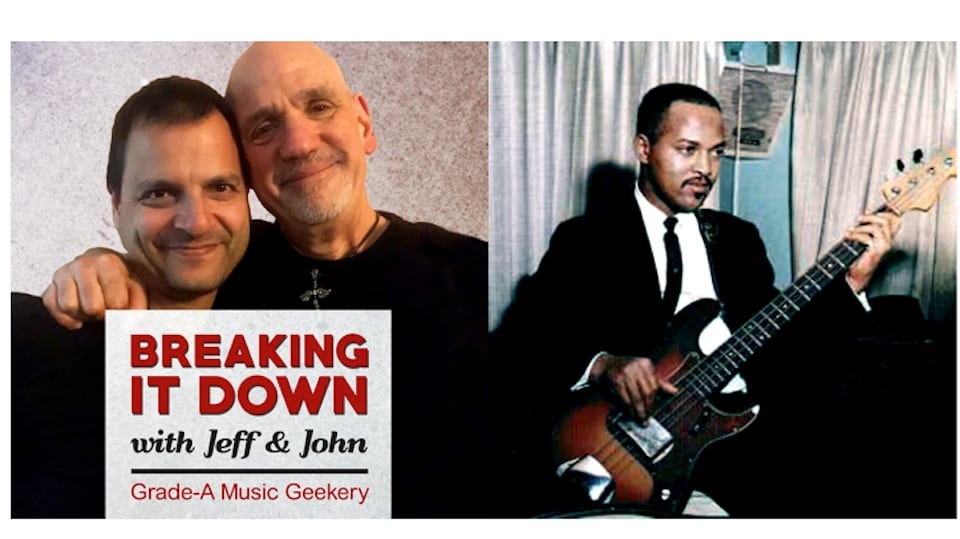 John Montagna and Jeff Ganz are working musicians. They’ve played just about every kind of music and every kind of gig you can imagine. And they’ve got the stories to prove it.

In short, they’re guys you’d love to hang out with, in the way you might after a show, a gig, or (just sayin’) maybe a cocktail or two. If you want to talk music, to really geek out, Jeff and John are your guys.

That’s why we created our podcast, “Breaking It Down (with Jeff and John).” The idea is to do a “deep dive” into the music we love. To pull it apart. To see what makes it tick. To hear, and learn, stuff we might not have noticed before.

Being bass players, John and Jeff are starting with a guy who, if there were a Mt. Rushmore of bassists, would be grinning proudly in granite right now: the Motown genius James Jamerson.

Related: These Guys Were REALLY Behind the Music

Jamerson changed the way pop music sounds. His vocabulary, his phrasing, his funk, and his imagination elevated the instrument in ways we still hear today. Jeff and John get behind Jamerson’s approach and even produced some tracks of their own to make their points.

So get under the hood of this musical Ferrari and see what made him run.

Listen below — or on any of your favorite podcast platforms.

P.S. If you want to hear John flex his voiceover chops, check out our “What Is Punk?” video.

Photo Credit: Image of John Montagna and Jeff Ganz courtesy of the artists; Bassist James Jamerson of the Motown backing band ‘Funk Brothers’ rehearses in the studio in circa 1962 in Detroit, Michigan. (Photo by Michael Ochs Archives/Getty Images)

6 comments on “Appreciating the Genius of James Jamerson”