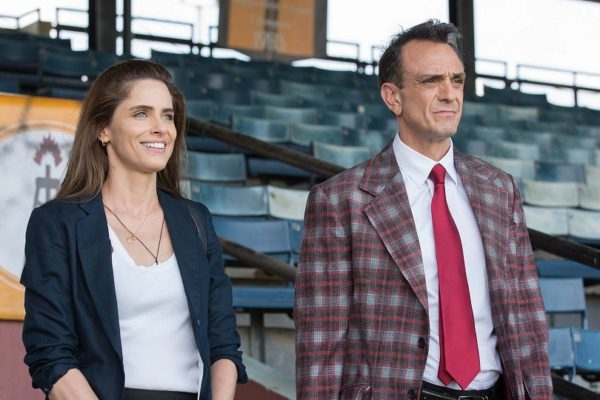 How far can you fall from grace? Pretty far (and pretty hilariously) if IFC’s new series Brockmire is any indication. The title character (played by Hank Azaria) is a baseball announcer, who, after ten years in exile brought about by an on-air meltdown triggered by his wife’s infidelities, is reduced to doing play-by-play for the Morristown Frackers, a cash-poor and talent-strapped minor league baseball team. That Jules (Amanda Peet), the team’s owner, hopes to use the announcer’s infamy (and YouTube virality) as a way to sell tickets may conflict with Brockmire’s hopes to do the work he loves, but perhaps that’s the cost of redemption.

[amazon template=right aligned image&asin=B001D09OAI]Because Brockmire is far from “woke.” He’s an old-school broadcaster with no sense of what’s politically correct, even if he can still shine in the booth where he combines a caustic sense of humor with some terrific insights into baseball. As for Jules, she’s a perfect match — another wounded soul who’s risked everything she owns to keep the team afloat. Since this is TV, of course, they end up in bed together. It’s not exactly a match made in heaven, but the characters find something they need in each other. The chemistry between Azaria and Peet takes the series to a much higher level than you’d expect from material that originated as a video on the Funny Or Die website.

Yes, it’s funny and extremely raunchy, but the series isn’t just going for shock value. Brockmire recalls films such as Bull Durham or Major League, which also had something to say about baseball as a way of life beneath the R-rated humor. Azaria has crafted a memorable character with Brockmire, right down to the perfectly pitched voice and the loud plaid blazer. Peet, for her part, is excellent as the dreamer who still believes in the power of baseball. The lovable losers who make up the team also provide some laughs, including Hemky Madera as an older slugger named Uribe and Tyrel Jackson Williams as the team’s intern Charlie.

Brockmire is definitely not for all tastes, but if you’re a sports fan with a fondness for colorful characters, you’ll find much to enjoy here as the characters wax philosophic about America’s Favorite Pastime. The writing by Joel Church-Cooper deftly balances the off-color humor with some unexpected touches of depth. The series has already been renewed for a second season, so it looks like we’ll get to see where Brockmire, Jules and the team end up. Whether they make the playoffs seems a lot less likely, but stranger things have happened in baseball. And on TV.