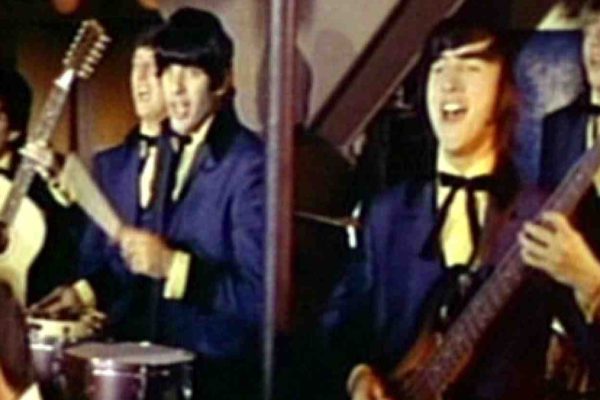 This year there have been more events to celebrate the rock music of the 1960s than in any previous one, and it’s still only April. London’s Victoria & Albert Museum’s You Say You Want a Revolution? Records and Rebels 1966-1970 closed in March. This month San Francisco’s de Young Museum opened The Summer of Love Experience: Art, Fashion, and Rock & Roll. In May, It Was 50 Years Ago Today! The Beatles: Sgt Pepper & Beyond, a feature-length documentary, will hit theaters, and Capitol Records will promote an anniversary box set of Sgt. Pepper’s that will list for $150.

As I was anticipating the publication of my new book, My British Invasion, it occurred to me that these celebrations have eclipsed an odd cultural trend from the same period: American rock bands of the sixties were so desperate to succeed in the wake of The Beatles, they discarded their natural identities to concoct ones that approximated The Beatles. It was daft, it was crazy, but there was a certain logic to it, and it worked. The sound of The Beatles and the other British artists — The Dave Clark Five, The Kinks, The Zombies — that followed them into the charts in 1964 was so appealing, many American teenagers felt that they had to assume similar, alien identities, whether or not they felt comfortable wearing long hair and risking being called a girl. The notion was emboldened after witnessing the effect The Beatles had on their fans in A Hard Day’s Night, and of the joy they exuded. This identity swap was made less difficult owing to British singers being so enamored of American rockers like Buddy Holly and The Everly Brothers that they strove to sing like them.

The first Beatles-like American group to have a hit were San Francisco’s The Beau Brummels, who named themselves after the 19th-century English dandy. Their managers decked them out in suits and told people they were English. Their first single, “Laugh Laugh,” released in January 1965, became a Top 20 hit. Their second record, “Just A Little,” made the Top 10.

Around this time The Crossfires were playing weekends at the Revelaire Club in Redondo Beach, south of Los Angeles. Although they started out as an instrumental surf band, their strong vocal blend could effectively deliver many of the English hits heard on the radio. After shows they often congregated at a coffee shop or bowling alley and playfully affected English accents. They knew they couldn’t pass off being The Beatles, who were too well known, but they could be a less visible group like Gerry and the Pacemakers or The Dave Clark Five. They knew all their names and enjoyed the surprised reaction from waitresses who thought their longhaired customers were celebrities. People asked them for their autographs and they got free drinks. The group knew what to order, too, confusing their servers by requesting “white tea with a bickie [a biscuit, or cookie] on the side so we can dunk it.” But it didn’t end there.
[amazon template=right aligned image&asin=B01MSNHP0X] Popular L.A. DJ Reb Foster, new co-manager of the band, thought they needed a new name, not one linked to the passé surfing craze. He suggested “The Turtles.” The group thought Reb was making fun of the way they looked, that they were fat, slow and clunky.

He explained that it had “tles” at the end, just like “Beatles.” It “sounded English,” and that music fans would think they were a new British band. When the group toured during the summer of 1965 on the strength of their “It Ain’t Me Babe” hit, some posters billed them as “Direct From England.”The Sir Douglas Quintet, from Texas, had a Top 20 hit with “She’s About a Mover,” also in 1965.

Prior to adopting the name The Byrds, the quintet released a single as The Beefeaters, after the ceremonial guards of the Tower of London. The group’s Jim McGuinn and Gene Clark completed their lineup by asking conga player Michael Clarke to play drums—even though he had never played before—because of his resemblance to The Rolling Stones’ Brian Jones.

Even two years later, after the dominance of the British invaders had diminished, American bands were pulling the same switcheroo. Chicago group The Pulsations changed their name — at the suggestion of a TV station security guard — to The Buckinghams and hit Number One (in February 1967) with “Kind of a Drag.” Of course, not all the British imitators were successful. Los Angeles’ The Palace Guard, who dressed themselves in suitable, red military-styled coats, remained a local club band even with future phenom Emitt Rhodes behind the drums.

5 comments on “America’s Beatles: From The Beau Brummels to The Turtles to The Byrds”