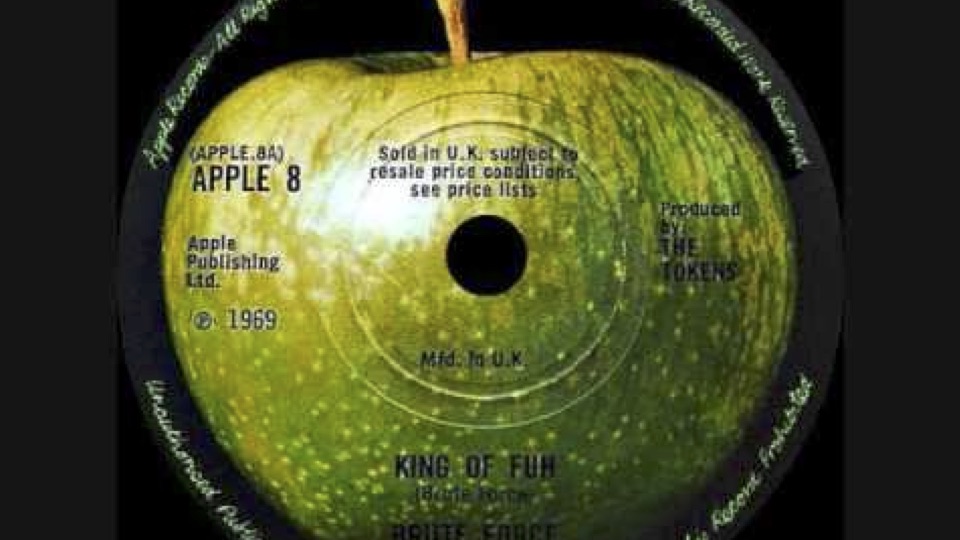 “King of Fuh” was the most controversial record pressed by Apple Records in 1969. Written by Stephen Friedland, known as “Brute Force,” the song was produced by The Tokens. George Harrison overdubbed 11 strings of the London Philharmonic Orchestra on the track.

Yet only 1000 copies were distributed.

Over four decades later, in 2010, it was again released by Apple on the compilation Come and Get It: The Best of Apple Records.

The infamous song was created back in 1967. Friedland had written a poem called “A Furry King” which evolved into “King of Fuh.” It was about a magical, wondrous land. The genius novelty song had a beautiful melody, in which Friedland felt enamored with. “It [the song] crashes into the mind, uses the word commonly used as a curse or bad word in a new way,” said Friedland. “What comedy does, it rearranges the pieces, it shakes the chessboard. Everything starts flying and people start laughing. No one would play it. It crashed everyone’s mind. The best thing since sliced toast.”

Related: “Music Geeks, Have We Got A Show for You”

“King of Fuh” being censored and having no radio airplay left Friedland dumbstruck. He said, “Fear in their mind and being fined. But if it ever got to court, the judge would have to recognize the [curse] word is never mentioned. The song is about beauty, nothing about sex, actually. It’s highly mystical. It gets people to think one way, while saying another thing.”

While “King of Fuh” is what put Friedland on the map, the American singer/songwriter is no stranger to creative success. He wrote and performed with The Tokens in the 1960s; and also wrote songs for Peggy March, Del Shannon, The Chiffons, and The Cyrkle, to name a few. He also acted in theatre and movies and performed comedy.

He was born in Jersey City and was influenced at a young age when he saw his mom acting in plays at the Jewish Community Center Theatre. She lived to see Friedland’s success and was enthusiastic about anything he did. “I hardly understood her excitement,” he said. “She’d watch whatever show I was on, whatever movie, no matter how small the appearance. She was a big fan.”

He went on to perform in high school variety shows and in college plays. Theatre morphed into music, then in 1964 he joined The Tokens and ended up touring with them until 1968. After Friedland left The Tokens, he concentrated on his own musical career. He wrote and recorded the LP, “I Brute Force—Confections of Love” for Columbia in 1967.

In July 1968, Friedland, along with his friend Ben Schlossberg Jr., participated in an expedition to swim from Cape Prince of Wales, Alaska to Siberia, 50 miles across the Bering Strait. They made it halfway, stopping between Big Diomede and Little Diomede Islands, according to Life Magazine, September 1968.

In later years, Friedland performed in comedy venues and acted in movies, including Ghostbusters. He’s performed “King of Fuh” at New Jersey’s Beatlesfest.

Friedland presented “The King of Fuh” a musical comedy at the Players Club, New York City in 2006. Of course, he, billed as “Brute Force” played the King. He said he would like to do that again. He also envisions performing “King of Fuh” on a talk show.

Today Friedland keeps himself active with projects such as his planet work. He once stood in Union Square, holding his “I Pledge Allegiance to the Planet” poster and challenged people to examine their minds and keep love in their lives. He aspires to get his pledge spoken at the Olympics in 2020.

“I’m pushing my best foot forward,” Friedland said. “When I get onstage and perform, it’s definitely a highlight of my career. That’s the way I treat it. I have a lot to say and I want to be funny and get booked again. I’m doing the best I can.”

Image: center label for 45 of “King of Fuh” by Brute Force

1 comment on “Brute Force: The Beatles Loved It, But…”