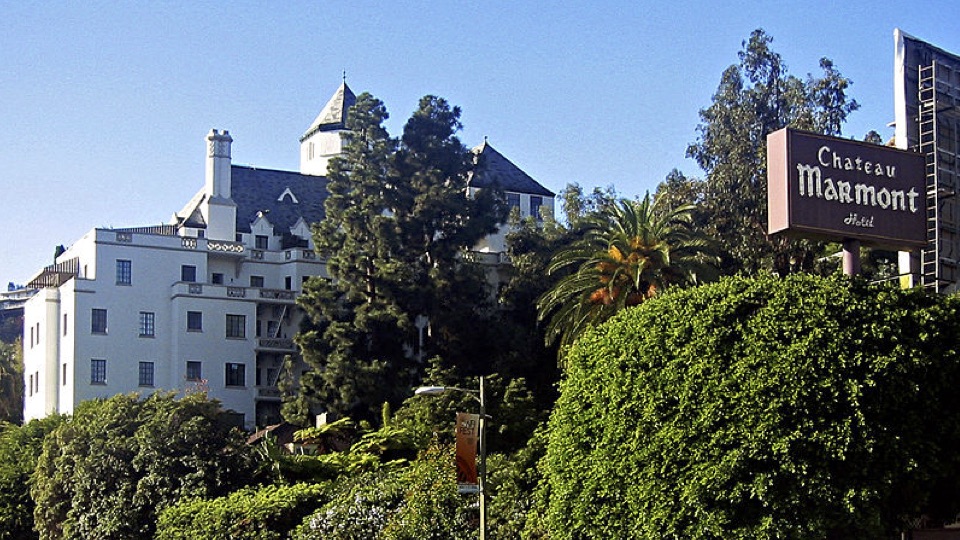 TVs thrown out of windows; motorcycles ridden through the halls… Everyone knows that rock stars bring their own brand of chaos to hotels but doesn’t that make for good stories? Many notable rock n’ roll moments of pure decadence have taken place at a Los Angeles-area hotel. From the stories told over the years, it’s certainly tempting to check out where it all happened. Here are the most iconic places in L.A. that you can stay at and soak up some rock history  (even if you’re more the type to be asleep by 9:30 PM).

Chateau Marmont is one of the most infamous LA hotels, known for having a great security team to ensure that their famous guests feel free to let loose. As a result, every A-list celebrity seems to have a story to tell about their experience in this place. It’s even known that Harry Cohn, former Columbia Pictures president, used to tell clients “If you must get in trouble, do it at the Marmont”.

One story that somehow went public involved Jim Morrison and his habit of swinging between balconies and how he once fell two stories doing so. Then there was Led Zeppelin getting switched from the main hotel to the bungalows for stealing food carts to transport naked women between rooms.

You may know this hotel for its former nickname “Riot House,” which the Hyatt Hotel Group may have you believe was merely a play on the word “Hyatt House.” The reason behind the nickname came from insane rock star parties and their general misbehavior.

A few of the most widely known stories are from Led Zeppelin’s stays, where they drove motorcycles through the hallways and threw TVs from the balcony. Due to the latter, the hotel closed the balconies in the rooms with glass to avoid anyone trying to relive the iconic moment. As an homage to its crazy old days, the hotel bar was cleverly named the Riot Room.

Besides being a hotel, it’s also home to the famous Nightbird Studios, where many big names in the music industry record their albums to this day. The hotel decoration includes thousands of signed pictures of rock stars taken during their stay.

The origin of the studio has a legend of its own. Allegedly the hotel manager was worried about the noise and asked Jeff Beck to rehearse in the garage, today known as “Studio A.”

While the Beverly Hills Hotel has become a background for every Instagram model, its structure and iconic palm trees were immortalized in 1976 as the cover of the Eagles’ hit album Hotel California.

The album that made it into the Grammy Hall of Fame, features a song of the same name with lyrics that make it sound like the kind of place to avoid: “We are all just prisoners here…You can check out any time you like, but you can never leave!” However, Don Henley, one of the writers of the song, has clarified it’s not about the hotel, but the band’s move to California.