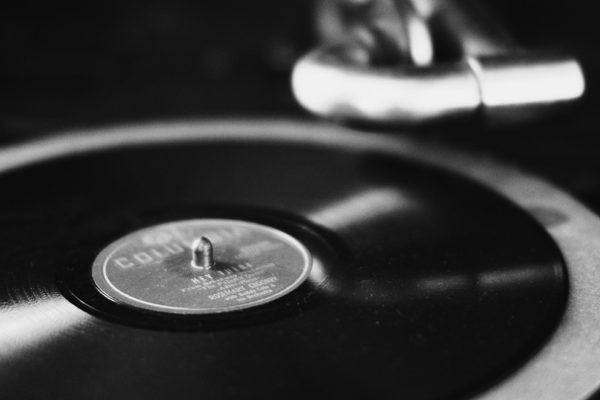 Every pop hit in our shared musical culture came to us, and lives on for us, through the medium of recording. Most of of these songs arose in some kind of live performance, even if a private one. But understanding the relationship between music performance and recorded music requires us to understand that this relationship has always been changing and continues to change. For the sake of brevity, I’ll start with a typical bluegrass recording in the 1940s. The band would stand in a circle around a mic which was equally sensitive in all directions. When it was time for a solo or a featured vocal, the soloist would step forward, thus increasing their volume in the mix. There are hundreds of amazing recordings which were made in this utterly simple way, with no overdubs. Big band vocal recordings of the era were a more sophisticated affair, using multiple microphones skillfully placed, which were balanced into a pleasant mix, but everything was recorded together.

Although stereo tape recording was developed in the early 1940s, true multi-track recording was pioneered by musician and inventor Les Paul, whose recordings from 1950 to 1954 with Mary Ford demonstrated the amazing potential of this new medium (Patti Page was the first to overdub her own voice, but the Paul and Ford recordings were virtuosic in their use of layered vocals and instruments).

In many respects their records had more in common with the 70s style of production than they did with the 1960s that followed them. Like a 70s disco or rock engineer, Paul recorded each part by itself very cleanly and precisely, while in the 60s the band was king. Overdubs of additional musical material, and the lead singer occupying their own track, these techniques were from common to constant by the time of the British Invasion, but they were done on top of a rhythm section recorded all at once.

By the time the 80s synthpop revolution really took hold, recording all the musicians simultaneously at any point in the process was considered retro. Isolating each part, and treating it with various tools of sonic alteration, became the dominant model. U2, the Red Hot Chili Peppers, and others, wired houses to allow separation of parts while recording simultaneously, thus preserving aspects of their performance relationships.[amazon template=right aligned image&asin=B001NB4Z6K]

But more and more recording was drawn into the digital revolution, and now multi-track recording is, like video editing, a world accessed from a desk. Every recorded part is a waveform: alterable, stretchable, slice-and-dice-able to the nth degree. More and more of the parts are never recorded by microphones or necessarily even played with fingers, they are midi notes triggering virtual instruments.

Music is vast, and relatively unfiltered live performance is treasured in many quarters, while others fully embrace the radical new powers of the digital audio workstation medium. There is perhaps a tendency to see these as adversarial positions. As a songwriter and recording artist, I believe that these two parts of our musical culture need each other to flourish. Great music arises out of intimate relationships between artists and instruments, AND it comes to such large numbers of us, in such a bewildering diversity of forms and approaches, because of a truly remarkable set of tools that have developed in the course of roughly a century. The recording medium itself, in its rapid evolution, has changed the meanings of both instrument and performance.