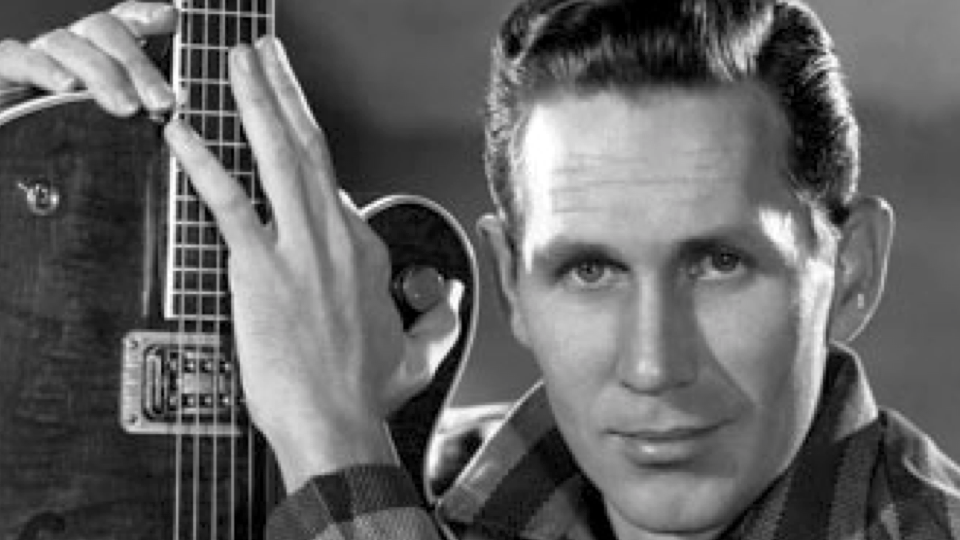 Way back in the day, center Henry Finkel did not have a storied NBA career, but he did play with what is known today as a “Big Three.”  In Finkel’s case, he played behind center Dave Cowens and with Hall of Famers Jo-Jo White and John Havlicek.

Unlike Mr. Finkel, Atkins knew what to do with a pick.  Chet would secure his around the thumb of his strumming hand which played the bass line, while up to three of his other fingers plucked rhythm and melody; making him sound like two interplaying guitarists.  In a 1990 interview, fellow guitarist, Mark Knopfler said he saw Chet in concert play two songs at the same time.  Chet wryly added, “I was thinking of doing my laundry too.”

But before Chet became what youngsters today would call a “sick guitarist,” the Tennessean was a sickly youth; inflicted with asthma.  He found relief and a companion in a ukulele then a banjo. He recalled his early banjo years: “I’d played it until the strings broke.  When that happened, I’d just rip a wire out of the screen porch and tune ‘er up again. It took me twenty years to learn I couldn’t tune too well. And by that time I was too rich to care.’”

When he was nine, the legend is that he traded a pistol or a farm wagon for a guitar.  In an attempt to play like his guitar hero, Merle Travis, Chet used four fingers to pluck; not knowing that Travis only used two.  Because of his asthma and in order for him to get a good night’s sleep, Chet would sit in a chair with a guitar, very often falling asleep with the instrument in his lap.

After he mastered the guitar, he was off and strumming. The Carter Sisters (including Johnny Cash’s future wife, June) and Mother Maybelle of the Carter Family fame, hired him to be part of their touring band.  RCA Victor took notice and in 1949 gave him a record deal then hired him to be the studio guitarist at the RCA studio in Nashville.  They later made a deal with Chet to be in charge of RCA’s Nashville (country genre) division; where he signed the first African-American country singer, Charley Pride, and produced a slew of artists including Waylon Jennings.  But the best thing that ever happened to RCA was that Chet strongly advised them to outbid Columbia Records and sign Elvis.

Chet’s playing may have been the best thing to happen to George Harrison, who used the same guitar model as Chet’s when George and his three mates appeared on the Ed Sullivan Show in 1964.  George even wrote the liner notes for Chet’s 1966 cover album, Chet Atkins Picks on The Beatles, which included: “I have appreciated Chet Atkins as a musician since long before the tracks on this album were written; in fact, since I was the ripe young age of seventeen.”

But not all of his RCA artists were happy with Chet’s producing ways which, thanks to his use of strings and orchestras, became known as the “Nashville Sound.”  Chet joked that its definition was “the sound of money.”  Willie Nelson was one who didn’t appreciate this sound.  As Willie recalled in 2020: “Chet Atkins was a great producer. He knew how to call together all the great musicians. But the problem was me trying to do my songs live with the bands that I was recording with.  I had twenty pieces in the studio, but when I go out to play I’ve only got four or five.  So it had to change—I had to play the music that I could play with my band.”

Besides Chet offering his take on what an artist should sound like, he also advised how a singer should look like.  It was advice that Dolly Parton wisely ignored.  She remembered: “Chet said, ‘Dolly, you’re going to need to get rid of all that because people are never going to take you serious if you look like that; you’re just looking too gaudy.  So, after I became a big star, looking the same way — and even worse at that time — Chet came up to me and said, ‘Boy, I’m sure glad you took my good advice.’”

Chet also took some good advice from Mark Knopfler who told him to get back to his country roots; resulting in their 1990 collaboration, the exquisite Neck and Neck.  The affection and admiration for each other can be heard on their take of “There’ll Be Some Changes Made.”

The lyrics to this 1921 song were slightly modified; which included Chet commenting on Mark’s playing (“Pretty good but you’re no Mark Knopfler”) and singing: “I’ll start wearin’ make-up like Jackson and Prince/You’ll see me ridin’ in my Mercedes Benz.”

But unlike some musicians and today’s reality/Tik-Tok/Instagram stars who virtually live to call attention to themselves, the self-effacing Chet was content to lead a life filled with picking and producing.  Before he died in 2001 at age 77, many universities offered him honorary degrees but he refused to take one; noting he had a degree in “C.G.P.:” Certified Guitar Picker.