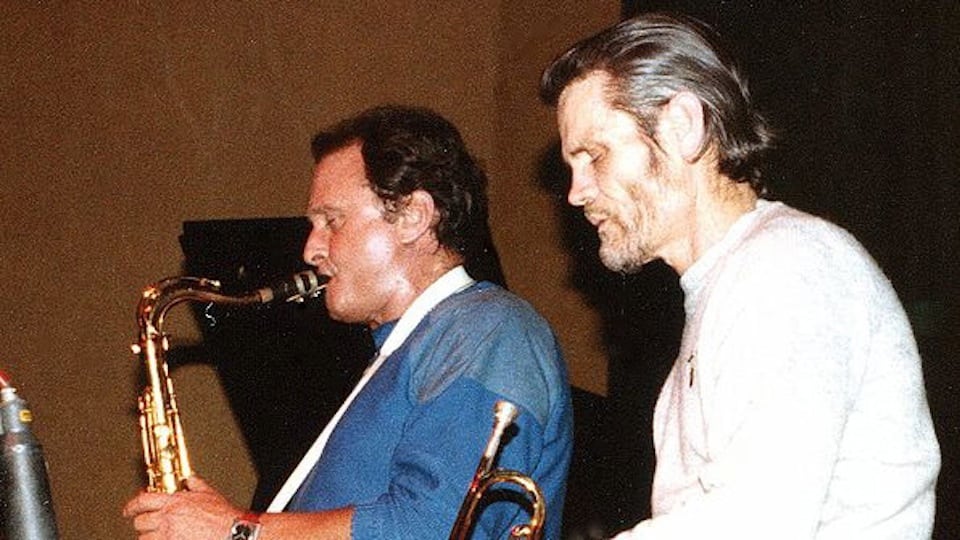 Musicians can be pretty colorful folk, but the biopics that celebrate them can be hit or miss. For every Straight Outta Compton, there’s a Beyond the Sea. In the strange way that Hollywood sometimes releases several films at a time on similar subjects, two cool biographies on great jazz trumpeters have recently hit the home market. You can read on, or hear all about it in our weekly radio segment.

The great horn player Chet Baker, has been called the “James Dean of Jazz,” presumably because of his good looks and bad boy image. Perhaps the “Junkie of Jazz” would be more like it, though, since he spent more years of his life high on heroin than not.

This dark insight is among many in Born to Be Blue, by Canadian director Robert Budreau. This highly fictionalized narrative takes enormous liberties with fact, as CultureSonar’s Cate Harty points out in her review, but it is nonetheless anchored in real events. Instead of chronicling Baker’s rise from Oklahoma farm boy to LA jazz king, the film focuses on Baker’s struggle with heroin addiction and his subsequent musical comeback after a brutal beating in 1968 that left him with a broken jaw, missing teeth and a ruined technique.

Ethan Hawke stars in the title role and brings real tenderness to this damaged character, in perhaps the best performance of his career. The underlying current of the film is the friction between East Coast jazz, epitomized by Miles Davis’ ever-more-out-there innovation, and Baker’s more romantic and melancholy “cool jazz” style.

A singer of torch songs and icon of West Coast Swing, Baker was viewed as a lightweight by the gods of Birdland and spent much of his life trying to earn respect on the East Coast jazz scene.

Kedar Brown portrays a stern and scowling Miles Davis, whose favor Baker relentlessly seeks. Carmen Ejogo (Selma) is wonderfully cast as his fictionally contrived, composite girlfriend, who serves as both muse to his music and foil to his drug use.

Born to Be Blue is an intimate and personal story wrapped in a beautiful visual package. The film captures the cool 50’s vibe perfectly — and the music is just right. After you see it, you’ll want to immediately put on a Chet Baker record. How much better a recommendation could you want?

And then there’s Miles himself.

How do you possibly capture the depth, breadth and downright strangeness of his massive career?

One smart solution is not to try at all.

Let’s confess here that Don Cheadle is one of our absolute favorite actors; and he moves even higher on the list after having starred in, co-written and directed Miles Ahead, an unconventional but engrossing look into the essence of genius.

Set in 1979, Miles Ahead observes a short, particularly miserable period in the life of the jazz legend, after a 5-year creative dry spell.

Broadly fact-based with a healthy dose of creative storytelling, the film presents a broken Miles, after decades of drug abuse and long after the love of his life, wife Frances Taylor, fled their marriage.

Limping and mumbling to himself, he is portrayed as a cocaine-addled, paranoid recluse, wallowing in lost love and resentful toward the world, especially those would profit from his talent.

The film’s 2-day timeline is framed around the theft of a demo tape of Davis’ recent music, the recovery of which sparks his renaissance in the music scene.

Ewan McGregor is wonderfully cast as a hounding Rolling Stone reporter−eager for a comeback story about the “Howard Hughes of Jazz”−who weasels his way into Davis’ good graces. His dual role of conniving nemesis and suck-up sidekick is a metaphor for the all the takers and users who caused Davis to shut himself away in the first place. The old adage, “Just because you’re paranoid doesn’t mean they’re not out to get you,” totally applies. Smartly-placed flashbacks help weave the larger narrative of Davis’ free fall to the lowest point in his life.

The plot is just a framework around the bigger story of a monumental creative spirit. Cheadle’s electric direction immerses you in the mind of a musical revolutionary and the mind-bending world of jazz. The visuals feel improvisational. Psychedelic colors, quick paced cuts and blurred action accompanied by almost constant discordant jazz give it a hallucinogenic feel. There are car chases, surreal encounters with record executives and even a shoot-out at a boxing match. Mirroring Davis’ state of mind, the film feels tense, out of control – and true in the deepest sense.

We particularly admire, by the way, that Cheadle learned to play trumpet so that, when he mimes Miles’ solos, his fingers are in the right place. How cool is that?

Anyway, whatever liberties the film takes with literal facts, it is remarkably successful capturing something deeper – the crazy amusement-park ride through the mind of one of our greatest musical geniuses.

Both films are available on DVD and on the usual streaming services, so dig ’em whenever you want.