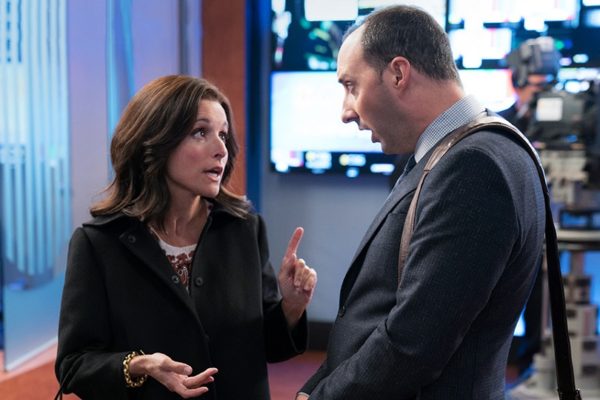 Anyone keeping up with HBO’s political satire Veep knows that the show has received an Emmy nomination for each of its five seasons for Outstanding Comedy Series (and taken home the trophy the last two years). And with good reason. The show is side-splittingly hilarious. The secret to the show’s success isn’t just Julia Louis-Dreyfus either – although more on her later. It’s the chemistry of its entire cast. As comedies go, no show in recent history has had this strong an ensemble. Certainly, not since Arrested Development. And the writing staff knows it, clearly working with each actor’s strength and idiosyncratic style.s

Matt Walsh, a.k.a. the lovable Director of Communications Mike McLintock, got his start in the Upright Citizens Brigade; Timothy Simons, the endlessly despicable Jonah Ryan, milks laughs from the most reprehensible behavior; Anna Chlumsky nails it as the stubborn, uptight, self-sacrificing Amy Brookheimer; while Tony Hale as right-hand man Gary Walsh carries on the give-and-take tradition of Arrested Development. As for Sam Richardson, his sweet, bumbling Richard Splett has emerged as a bit of a fan favorite.

Leading this confederacy of dunces is the acid-tongued yet surprisingly vulnerable vice president Selina Meyer played by Julia Louis-Dreyfus, who has received the Emmy for Outstanding Lead Actress in a Comedy Series the past five years in a row. Her ability to switch from polite smiling hand-shaker to vicious nightmare in political social settings is a marvel to behold. For an actor to pull off playing someone so terribly hateful yet lovable is a magic trick that boggles the mind. Dreyfus has somehow managed to escape from the shadow of Seinfeld>’s Elaine and immortalize herself as one of the greatest TV actors of all time. Anyone who thought The New Adventures of Old Christine was as good a follow-up as she could hope for…well, the joke’s on them.

Speaking of jokes, the writers deserve their due here too, not least of all for their ability to pen an insult. If there were awards for Best Put-Downs this show would have no competition, except maybe Feud. Consider the following.

Defying all laws of probability, these zingers come about a mile a minute every episode. Perhaps the screenwriters are finally getting the chance to say how they really feel to all those TV executives. Creator Armando Iannucci originated this concept with The Thick of It, a political satire that ran on the BBC back in 2005 to great success using the same cinema-verite style. After a pilot for an American version was dropped by ABC, Iannucci began talks with HBO. For this new project, he was given much more creative control, and ended up serving as show runner until the end of the fourth season.

Both before and after his tenure, the show paints a hilarious picture of self-obsessed careerists who will stop at nothing to get ahead in the cutthroat world of American politics. Yet somehow, improbably, they’re all also incredibly human; they may fake having cancer for ratings or say things like, “I redact your fucking face,” but amid the meanness, back-stabbing, double-crossing and lies, the cast and creative never shy away from also displaying an astounding amount of heart.  One need look no further back than Season 5 during which Mike McLintock’s pending adoption of a Chinese baby hinged on Selina’s new foreign sanctions (including a ban on adoptions) all because of a tweet she mis-sent. But cruelty did not prevail.

1 comment on “What Makes “Veep” So Damn Good? A Perfect Ensemble!”