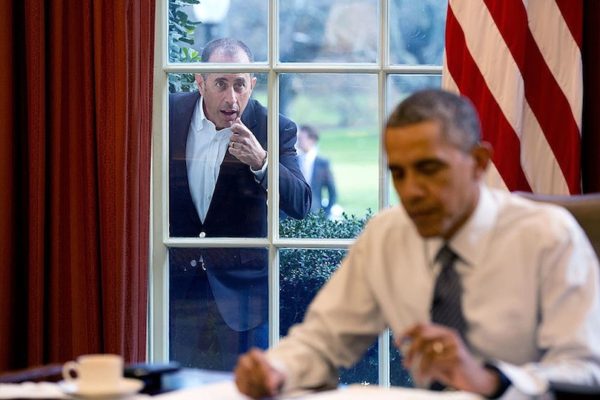 Jerry Seinfeld launched the seventh — and arguably best — season of his web series Comedians in Cars Getting Coffee with an episode featuring President Barack Obama, an extraordinary “get” in TV parlance. Some of the webisodes are side-splittingly funny, largely because Seinfeld and his coffee companion (comedians like Jon Stewart, Garry Shandling, Steve Martin, Tina Fey, and Amy Schumer to name a few) are having so much fun. This one’s a little more sedate, but tells the very different story of a President with enough presence and sense of humor to hold his own when up against the wit of a Jerry Seinfeld.[amazon template=left aligned image&asin=B013VV1B66]

Aside from sheer entertainment value (which it has tons of – watch the President trying to argue his way past a White House security guard), this session poses a salient question on the current crop of presidential contenders. People say that George W. was a fun guy to hang out with and Obama shows himself to be the same — although still exhibiting some of his famous restraint. A question worth pondering, as we anticipate committing to any presidential candidate, is how s/he would come across in a Seinfeld interaction. Seems to me that’s an indication of character worth considering.

PS. Another famous comedian has just launched a web series, albeit with a very different tone and purpose. Read more about Louis CK’s new show Horace and Pete in our post A Place Where Everybody Calls You Names. Plus, if you like Jerry Seinfeld, you may also like a comedian named Gad Elmaleh. Read about him in The French Seinfeld? Qu’est-ce que c’est? And one more note: both Louis CK and Gad Elmaleh have been on Comedians in Cars Getting Coffee. Find the webisodes here.

0 comments on “Comedians in Cars Getting Coffee: Caffeinated Comedy”