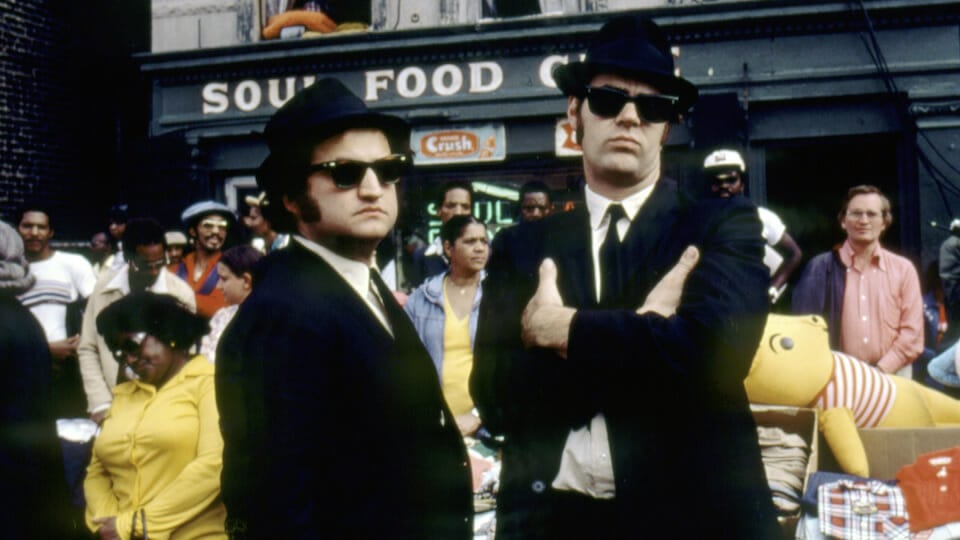 In the performing arts, creativity and talent appear in many forms. There are actors, singers, dancers, comedians, and writers. In some cases, you’ll find artists possessing an embarrassment of riches such as Justin Timberlake or Sammy Davis, Jr. but generally speaking transitioning across disciplines is an incredibly difficult task — especially for comedians. (One’s always waiting for the punch line or the sight gag!) The more difficult the path or the taller the barrier, the more some people are committed to overcoming the obstacle. Here’s a short list of artists who first made us laugh then made us sing along.

Did you know this all started when John Belushi and Dan Aykroyd did a skit about a Killer Bee band that covered “I’m a King Bee” by blues legend Slim Harpo? Did you know that Aykroyd owned and operated a blues bar? Did you know the fictitious Joliet “Jake” Blues and Elwood Blues were backed by Steve “The Colonel” Cropper on lead guitar and Donald “Duck” Dunn on bass guitar on SNL? Regardless, the not-so-fake band grew so popular that they headlined a movie directed by John Landis and released an album of 28 songs with five bona fide hits including “Soul Man.” The band toured for several years after that. And it wasn’t clubs like The Comedy Cellar or Second City.

She became a sensation with her eponymous late-‘80s TV show stateside. But before that, she was making Brits laugh via the BBC sketch comedy series A Kick Up the Eighties. In between the two, Ullman released an album that wasn’t very funny at all. In fact, it spawned six songs in the UK Top 100, including a cover of the Kirsty McColl’s “They Don’t Know” which made it all the way to number eight in the USA. A 1950s-style tune about falling in love with a bad boy, this catchy tune probably helped Ullman transition out of comedy whenever she wanted to after The Tracey Ullman show. Anyone else remember Household Saints?

Certainly one of the stand-up greats of all time — check out Delirious and Raw — Murphy’s also a formidable actor (Mr. Church) with a great musical to his credit too: Dreamgirls. Okay, we love the Nutty Professor series. But despite his range of talent, his decision to record and release a song written and produced by Rick James was still a surprise. What did we know? “Party all the Time” skyrocketed to the top of the charts even if he wasn’t doing the pitch-perfect impersonation of James Brown that he’d done in his classic “Hot Tub” skit. This wasn’t the end of Murphy’s recording career either. Check out the single “Wonna Deez Nights he did with Beenie Man for starters.

Millennials familiar with Foxx from Django Unchained (2012), Ray (2004), and Any Given Sunday (1999) might be surprised by how hilarious Foxx can be in sketch comedy classic In Living Color or The Jamie Foxx Show. And somewhere along the line, Foxx also managed to crank out a single that rose all the way to Number Two on the Billboard Hot 100. That means about a million downloads here! With support from rapper T. Pain, the song was proof that Foxx can win some women by making them laugh and others by busting out some R&B. (The video co-stars Jake Gyllenhaal, Samuel L. Jackson, Ron Howard, and Forest Whitaker.)

Now that we know that Donald Glover can do anything, we sometimes forget his roots were in comedy: the sketch troupe Derrick Comedy at NYU, a writer for 30 Rock, co-star of Community. All the while when he hasn’t been making the incredibly remarkable series Atlanta or popping up in the Star Wars movies, he’s been also releasing albums under the names mcDJ and Childish Gambino. We’re guessing you caught “This Is America” which went viral earlier this year but did you catch the sultry “Redbone” from Childish Gambino last year?

Photo: John Belushi and Dan Aykroyd on the set of The Blues Brothers directed by John Landis. (Photo by Sunset Boulevard/Corbis via Getty Images)