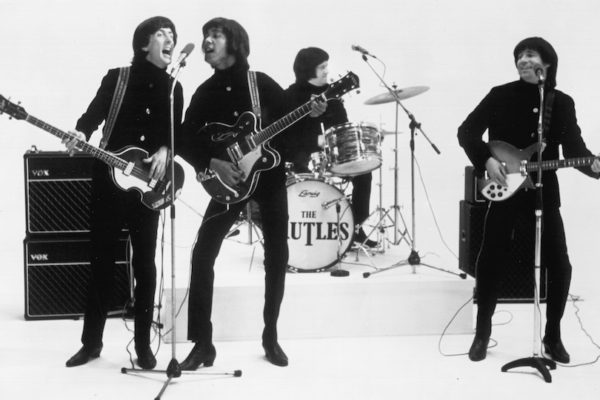 Of all the Beatles-related milestones, the 40th anniversary of the Rutles may be the most dubious of them all. But then again, the Rutles’ 1978 mock-documentary All You Need Is Cash may be the most hilarious of them all and well worth celebrating its 40th anniversary. Created by Monty Python’s Flying Circus alumni Eric Idle and Neil Innes, the concept of the Rutles emerged nearly a decade after the Beatles’ disbandment, providing a well-timed parody of the Beatles’ legend and music.  And its lost none of its cheeky wit.

Seeking to exploit Beatles fans’ nostalgia for their 1960s heyday, Idle and Innes recognized that the late 1970s were ripe for both fanning the flames of the Fab Four mythos and providing a biting counter-narrative to their pop-cultural supremacy. As Innes later observed, “I think the time was exactly right for what we did. Everyone saw the joke and got right into it. It would be a lovely joke today to pretend that the Beatles never existed and there were only the Rutles.”

See Related Article: “From Zero to Masterpiece In 30 Days”

As it happened, the original “joke” had been percolating for more than a decade. In 1968, Innes recorded the single “I’m the Urban Spaceman” with his fellow Bonzo Dog Doo-Dah Band mates. Adopting the pseudonym “Apollo C. Vermouth,” Paul McCartney shared production duties with Gus Dudgeon for the recording. Innes and the band had recently enjoyed a vaunted place in the Beatles’ orbit with their rendition of “Death Cab for Cutie” in the December 1967 Magical Mystery Tour television movie. During this period, the Bonzo Dog Band was hired as the house band for Do Not Adjust Your Set, a British television sketch comedy show that featured Idle, Terry Jones, Terry Gilliam, and Michael Palin, the core future members of Monty Python. With their shared stint on Do Not Adjust Your Set, Idle and Innes’s collaboration began to take form. In 1975, when BBC TV rewarded Idle with his own sketch comedy show, the Monty Python mainstay invited Innes to contribute the music for the series. With Rutland Weekend Television — which lampooned the UK’s smallest county — Idle and Innes began conceiving of the Rutles as a satiric vehicle.

The idea for the Rutles first emerged when Innes suggested they try their hand at doing a spoof of the Beatles’ first feature film A Hard Day’s Night. For the purposes of Rutland Weekend Television, Innes developed a sketch involving a Beatlesque band. And so the Rutles were born. After recording a demo of “I Must Be in Love,” Innes shared the Rutles’ first song with Idle, who hatched the idea of merging Innes’s conception of the satiric British beat with his plan to mock stylized television documentaries and their overtly sincere narrators. But Idle and Innes still needed a name. In addition to Rutland County, the fictional band’s strange handle found its origins in the word rut, which connotes being in a dull or repetitive pattern of behavior — the notion of being “stuck in a rut.” In another, more pejorative sense, the word rut refers to the annual mating season for deer—i.e., of being a “rutting stag.” In later years, Innes would joke that “I think the word ‘Rutle’ should be a verb, meaning ‘to copy someone you admire’ and in that case, the Beatles are Rutles, as they copied artists like Eddie Cochran and Gene Vincent. Oasis are Rutles because they copied the Beatles.”

It was Idle who imagined the names of the four fictional bandmates, who included Ron Nasty (John Lennon), Dirk McQuickly (Paul McCartney), Stig O’Hara (George Harrison), and Barry Wom [formerly Barrington Womble] (Ringo Starr). As Innes later recalled, “If Eric hadn’t come up with the ‘Rutles’ names and the idea of spoofing pompous TV documentaries, then I’d have almost certainly dropped the idea after we did it the first time. So Eric must be credited with developing the original idea.”

All You Need Is Cash made its American television premiere on NBC on March 22, 1978, with a BBC2 debut slated for broadcast the following week. From the outset, Idle’s script framed the fictional band as a kind of predetermined cultural juggernaut. “The Rutles story is a legend,” Idle’s narrator proclaims. “A living legend. A legend that will live long after lots of other living legends have died. Tonight we are extremely proud to present the semi-legendary life story of the Prefab Four: Dirk, Nasty, Stig, and Barry, who made the sixties what they are today. The fabulous Rutles.” Echoing the derisive moniker associated with the Monkees, the concept of the Rutles as the “Prefab Four” offers a knowing pun on the notion of prefabrication, the cheap and often poorly constructed public housing associated with suburbia and the postwar boom.

For all of Idle and Innes’s careful preparation and execution of the Rutles’ story, All You Need Is Cash was greeted with wide-scale audience disinterest in the United States.  It scored a dismal Nielsen rating, clocking at number 65 out of the 65 American television programs that were assessed that week. By contrast, the soundtrack album sold widely, even netting a Grammy nomination. In the ensuing years, the Rutles have enjoyed a cult following for their songs. As with the band that they began mocking way back in 1978, it’s the music that matters in the end.

Editor’s Note: You might enjoy the Facebook Live discussion Ken had with Scott Freiman (creator of the “Deconstructing the Beatles” films). They dug deeply into George Martin’s musical legacy.

3 comments on “Everything Fab Four: The Rutles At 40”