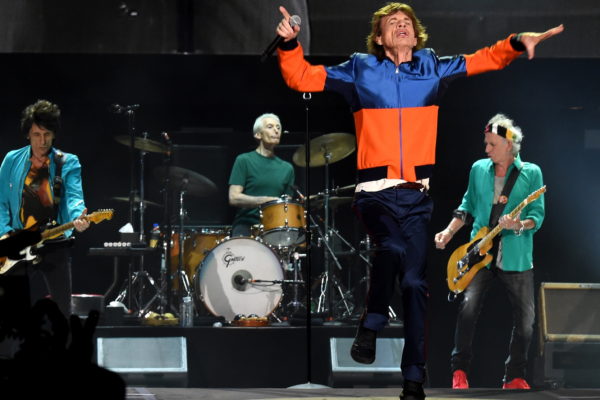 “Welcome to the catch ’em before they croak festival,” Mick Jagger told the audience at last weekend’s Desert Trip concerts, in the California desert near Palm Springs. “Who are they gonna dig up if they try to do this again next year?!” added Pete Townshend, the next night. Jagger and Townshend’s comments—and other wisecracks from Neil Young and Paul McCartney—got rowdy applause from the 85,000 geezers at what has been referred to as the Oldchella festival.

The cynicism and skepticism were rampant on social media in the weeks running up to the festival, with posts about performers in their 70s, geriatric fans and the sky-high ticket prices. There was certainly plenty to be cynical about at Desert Trip, from the $500-a-day “culinary experience” to the $29-per-glass Cabernet Sauvignon; and from the pop-up record store with overpriced vinyl to the $40 commemorative poster. As I walked around the grounds I couldn’t help but think of the David Spade sketch about Coachella, when a young hipster turns to Spade and says, “There’s music here too?”

I just returned from the second weekend of Desert Trip and you know what—it’s about the music, stupid!! And the music was freakin’ great! The six artists featured — the Stones, the Who, Bob Dylan, Neil Young, Paul McCartney and Roger Waters of Pink Floyd—have all been playing for 50 + years, and, as my 19-year-old daughter and concert buddy said, “they killed it!”

Let’s start with the singing. The average age of the six lead vocalists is 72, and—except for some straining by Roger Daltry—the singing was extraordinary. Even Dylan, often criticized for his craggy vocals, sounded strong and full. The bands definitely brought their A games, and they wisely filled their set lists with hits. Some highlights:

Dylan leaned heavily on his classic 1960s albums, including three songs from Highway 61 Revisited—the title song plus “Ballad of a Thin Man” and “Like a Rolling Stone.” This set list was a big departure from Dylan’s recent tours, which prominently feature tracks from his two recent albums of American standards. I love Dylan’s versions of “Autumn Leaves” and “Some Enchanted Evening” but I’ll take “Tangled up in Blue” and “Simple Twist of Fate” any day. As expected, Dylan made no mention of his Nobel Prize.

Mick Jagger’s physical stamina makes him a freak of nature, but for most of the Stones set my eyes were on Keith Richards and Ron Wood, following their amazing guitar interplay. In his recent autobiography Richards talks about guitar “weaving,” where the rhythm and lead guitars are indistinguishable. Richards developed this style 50+ years ago with Brian Jones, and he and Wood have refined it to a high art. I told my daughter, who was seeing the Stones for the first time, to try to take her eyes OFF of Mick Jagger and focus on the sounds of Keith and Ron. Hard to do, but if you can get your ears to lock into Richards’s “weaving,” it’s a joy to behold.

Paul McCartney just finished a North American tour and his set is a well-oiled machine. In fact, by his own admission, he tells the same jokes and anecdotes night after night. But it’s a great act and it appears genuine night after night. I had seen McCartney recently, so for me the highlights were two guest shots: Rihanna, singing a supercharged soulful version of “FourFiveSeconds,” the song she recorded with Paul last year, and Neil Young who joined McCartney for a blistering 4-song set. This included Neil passionately singing, yikes, part of  “A Day in the Life”:

He blew his mind out in a car…

Definitely a highlight of the weekend.

The Who had recently finished a two-year tour celebrating their 50th anniversary, so they too are battle tested. As expected, Townshend had the most fun with the Oldchella concept, telling the audience at one point, “all you young people want to see all us old people try to dance.”

Roger Waters closed the weekend on Sunday night, and his set was an odd choice. He played much of Dark Side of the Moon, which was sublime; but the songs from Animals and The Wall were performed with a heavy emphasis on the turgid, the dystopian and the downright depressing. Animated images of blood and violence filled the large video screens, along with texts of political hectoring (including an unrelenting anti-Trump segment). The world definitely has some big challenges and I’m pretty sure all 85K in attendance know this. After two and a half days of good vibrations, it was a strange way to end the weekend!

Throughout the weekend fans speculated about who might appear at next year’s version of Desert Trip. And make no mistake—there WILL be one next year, considering the buckets of money that changed hands over two weekends. A Simon & Garfunkel reunion? Crosby, Stills & Nash? Or the biggest get of them all—Led Zeppelin? One can only hope.

When they have a Desert Trip #2 next year, I’ll shuffle over.

1 comment on “Not Bad for a Bunch of Old Guys”