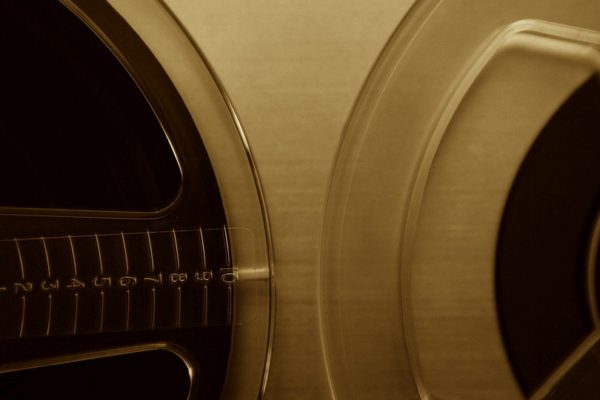 West Philadelphia, 1978. I was 16 that fall. I had two boomboxes with a little mic and cassette recorder built in. I would record myself playing acoustic rhythm guitar onto the cassette, then play that in the air, with me playing bass on an Arp Axxe monophonic synth through a stereo system and singing, all of that recorded onto the other boombox. It was horrible I’m sure, but I did a bunch of songs that way and learned a whole lot. Every time I remember that Arp synth, I think of Ann, the drummer in the Suburban Wives Club. She got the Arp back for me when a creepy local keyboard player stole it. We both knew he stole it, he blatantly used it in a gig right in front of us, but I was too young and scared to do anything about it. She just walked up and unplugged it from his rig while they were playing, and brought it over to me. All hail Ann the drummer.

4 Track Reel to Reel
When I made music for and with the artist and writer Stuart Horn from about 1980 to ’83, I used a Tascam four track reel to reel. I proceeded on the basis of profound personal ignorance with regard to studio technique in general, and multi-track recording in particular. But by trial and error, without a mixer, I made backing music for performance art pieces and for Stu’s songs. Because of his well-deserved reputation in the local art scene at the time, my naive efforts were heard and appreciated, and I was hooked. At the end of the debut of Stu’s musical theater piece From the Desk Of (for which I played acoustic guitar seated, facing away from the audience, towards Stu seated at his desk singing, while the four track reel to reel played the backing tracks), the audience gave us a rousing standing ovation. We stood, and we kissed, in sheer happiness at the success of the experiment. I had completely forgotten my parents were in the front row. They never asked me if I was gay or bi or in fact anything at all about Stuart or the music.

8 Track Reel to Reel
In Boston in the mid-’80s when I was pretending I knew what I was doing at Berklee, Adam Goldman had an 8 track reel to reel and all the boxes that made such a thing any use – mixer, noise reduction, patch bay, stereo master recorder, etc. We had (have) known each other since preschool, and fell easily into working on recordings together. I remember we had one song, some kind of synth pop ditty, to the point where it needed a competent guitar solo, and Adam brought his friend Andy Lipnick in. Watching Andy effortlessly add thirty seconds of structured melodic goodness to something I had written made me feel like a real grown up musician. I’m embarrassed to admit it, but a writer should not spare their own feelings: I was convinced we were all going to be famous.

Four Track PortaStudio
I recorded an entire album, Whatever, on a Tascam four track PortaStudio in 1996. You can buy the damn thing on Amazon if you care to, somebody still has some copies left. There was a fair amount of outboard gear involved, but that puny little recorder was the heart of the operation. The album was a lo-fi affair, to be sure, but it seemed to work on its own level, and got some college radio play in an era when that felt like a thing, at least to me. I had no monitors, so it was all done with headphones, a ridiculous way to work. I am painfully aware of the album’s flaws, though a few songs work really well even now I think. I’m proud that it exists at all under the circumstances. The dog kept barking outside at whatever cow or ghost squirrel had him upset, so he shows up a couple of times faintly in the background of a vocal track.

24-Track ADAT
I won a contest at Ohio University that same year, the award being the making of a video based on one of my songs. They chose “I Don’t Care,” from Whatever, but they wanted to re-record the song. So we did that at the OU Telecom studio using 24 track ADAT gear, which was basically video machines rejiggered to record multi-track audio, and chained together with a timing code to get enough tracks. I was quite miserable and more or less homeless at the time, and that definitely comes across in the video. The recording sessions were bizarre, it was a bunch of people I didn’t know recreating my snotty little four track thing with bigger bouncier sounds and better chops, and me singing on top of it. I kinda hated it, though if I’d been smarter perhaps I would have liked it.

Cakewalk DAW
About eight years later, in Charlottesville, my personal and financial life on a definite upswing, I made an album of songs played live by my alt-rock band ZAG, using the Digital Audio Workstation software (DAW) Cakewalk (now Sonar). Even at my limited skill level, DAW recording was hugely liberating. I badly abused the ability to copy and paste sections of music, and correct timings. But I also learned to start over as many times as necessary to get something worth finishing. I had an infant son while making the album, and spent a fair amount of time with headphones on, pointing and clicking at waveforms, while holding him in my lap, sometimes while feeding him. The album is fun and presents the material favorably, but it suffers from a limited sonic palette, and a lack of good mastering. I realized that year that I had not succeeded in bringing the best aspects of my live shows into the recording environment. My time since has been spent in part trying to figure out how to do that.

Digital Performer 9
Over these last years, and especially in working with Adam Goldman on the neo-swing Inside Voice album and the concept retro-pop album Box in the Attic, I have received a much deeper and richer education in making use of the digital audio work environment. The tools available now are astonishing and diverse, and far more accommodating to a variety of approaches than past DAWs. Digital Performer acts like the perfect old fashioned recording studio if you want that, or it can be robot choreography at its finest. Box in the Attic is a quirky collection of bits and pieces in a whole lot of different styles and textures. Adam said getting each demo of a new piece on Dropbox was like opening a Christmas present, a kit to put together and figure out how to make it run around the room. At times over the long project when my enthusiasm for the initial conceit waned, I found motivation in surprising and hopefully impressing my old friend with each new post. In fact I found the endeavor a powerful anti-depressant, a constantly evolving creative conversation. I stopped caring what anyone thought about it, and just went on the journey.

Instead of boom boxes facing each other as in 1978, this last album featured a lot of FaceTime conversations, our kids waving in the background as we talked over the piece at hand, and generally a lot of computer power and gadgetry engaged in an effort to convey something human. Looking back at 38 years of recording, of which these anecdotes are just a few glimpses, I’m astounded at the changes in technology in such a short time, the sheer volume of art produced by so many, and the rich tapestry of social experience that attracts itself to the ongoing attempt to catch the musical fireflies.