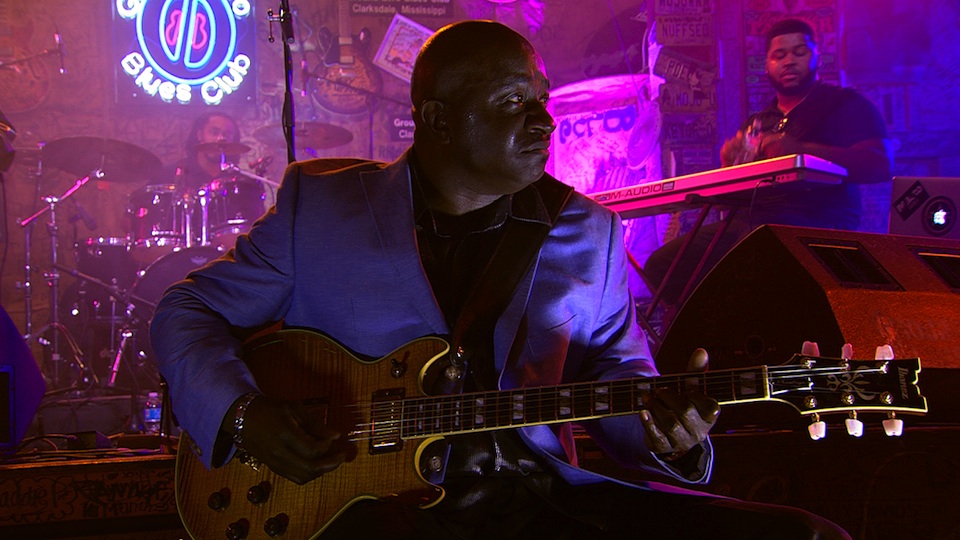 Celebrity-owned nightclubs are nothing new. Johnny Depp once had a stake in LA’s Viper Room; Jay Z. runs a sports bar chain named the “40/40 Club.” As for Morgan Freeman, he’s a bit more low-profile in his nightlife stewardship but his music venue — the Ground Zero Blues Club — has been celebrating the Delta Blues tradition for over 15 years in Clarksdale, Mississippi. If you can’t get down there any time soon, you can still get a sense of the sounds reverberating in this rollicking joint’s walls courtesy of singer-guitarist Dexter Allen’s new album Live from Ground Zero Blues Club. More on that below.

Q: You’ve got five studio albums to your credit. Why a live album this time around? How many nights did it take?

A: The opportunity was presented to me by Johnny Reid of Pass the Pick Productions, and I felt that it was time since I’d never done a live project. I had never done a premium live recording before…and also because the Pass the Pick team had a really cool concept in coming down to Clarksdale, the “crossroads”, where it all began, to film and record my show. It only took one pass, meaning we only played one set. We got up, hit the stage, and laid it down. I was asked to do my original material, and we just did what we do night in and out: “My Show”… There were no stops and start overs. What you see and hear on the album, is what you get with me and the band 24/7. Live. The real deal.

Q: The unmistakable voice of Morgan Freeman introduces Live From Ground Zero Blues Club. I know he owns the club but how did your two paths come to cross? Has he ever joined you onstage?

A: I first met Morgan Freeman in Memphis many years ago, while performing for an event, and have crossed paths with him a few times since then, just in passing. But for this particular project, it was the relationship of his business partner, and co-owner of the club Bill Luckett with the Pass the Pick principals Paula Kennedy, Bo Harrigan and Johnny Reid, that led to him introducing me on the album. Having the “voice of God” introduce me is definitely an honor and not a normal thing in the music industry, and I’m grateful. It was also very cool to have him just in the crowd enjoying the show. He hasn’t joined me onstage yet, but something tells me, it’s bound to happen, because he really loves music.

Q: You’ve got one song on the album that you didn’t write: Paul and Linda McCartney’s “Big Barn Bed” which you definitely “bluez” up. Are you a big Wings fan? Any there are other songs from their catalog you’d like to give the Dexter Allen treatment?

A: It definitely was an honor to have the privilege of picking any song I wanted to cover from Sir Paul’s MPL catalog. Trust me. It’s a massive and amazing catalog, and one can truly get lost inside that website. I wanted to pick something that hadn’t been covered yet and put my own twist to it, and I think it worked out quite well. I had two weeks to put it together and teach it to the band, and I think we pulled it off. I’d love the opportunity to cover other tunes in the MPL catalog. Who knows? the opportunity just might present itself down the road.

Q: The guitar work on “Night Time Loving” and elsewhere is sensational. Do you ever write songs that are strictly instrumental?

A: I have quite a bit of music that’s just instrumental in my studio, that words haven’t been written to yet. I’ve never just set out to do just an instrumental project, but its definitely something that’s possible in the future.

Q: The song “Hooked” has a good stretch of storytelling as the intro. How much does the story change from night to night?

A: The foundation of the story never changes, but the dynamics changes from night to night. I’m always feeding off the crowd or the room’s energy. It’s basically a transfer of energy. I bring it from the beginning, and we pass it back and forth throughout the night. I’ll definitely add and take away certain parts that I feel may connect more with a particular crowd. I pay attention to main highways and main street names and local familiar places and sometimes throw them in where they fit.

Q: Given that your parents were pastors and your grandfather a deacon, do you foresee a gospel album in your future? Are there any hymns or spirituals that you’d definitely include?

A: The Church will always be HOME for me. At this point, I would not do a “GOSPEL” project, because I respect my religion and my belief. When I decided to be a Blues artist, I knew I didn’t want to be both a Blues and a Gospel artist. It’s either one or the other for me. I’m not opposed to working on Gospel projects, writing, or even, playing instruments in Church, which I still do from time to time. I’ll always give “Respect, Praise and Thanks” to the Gospel because it “Raised Me”!

A: The Band, was definitely on point, and that unit had been playing with me for quite a while. The chemistry is what makes it tight and FUN!

0 comments on “Dexter Allen: Raised in Gospel, Steeped in Blues”