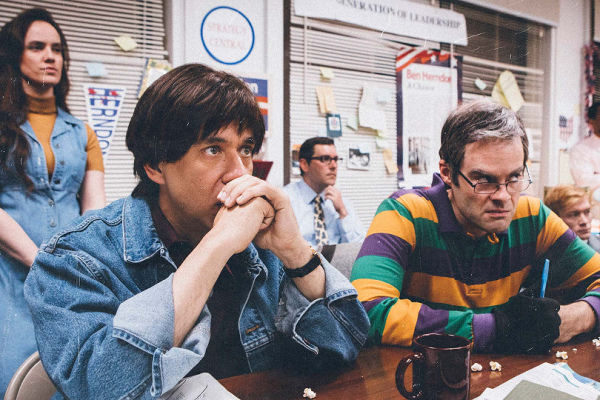 There’s an old saying, “Imitation is the sincerest form of flattery,” and if that’s really true, then IFC’s Documentary Now! is the most flattering series on TV because it is a big, fat love letter to documentary filmmaking from three major fans: Bill Hader, Fred Armisen, and Seth Meyers. We’ll all have to wait until September 14 to see how the trio of SNL alums takes on ‘90s politics in the Season 2 premiere “The Bunker,” (a spoof of The War Room) but for now, let’s relive the pleasures of Season 1 — now available on Netflix.

Albert and David Maysles’ 1975 doc is so oddly iconic, it easily lends itself to parody, and “Sandy Passage” pretty much pulls directly from the source. Eccentric fashions (a sweatpants turban!) and feral animals (cats, hungry raccoons) are aplenty. While Hader totally nails Little Edie’s patriotic flag dance, Armisen gets even more laughs from Big Edie, especially her love of liquor (like when he literally drinks out of a fishbowl).  As parodies go, this one is nearly perfect.

“Dronez” hilariously sends up HBO’s Millennial gonzo VICE News, as Hader and Armisen show up in increasingly ridiculous outfits while literally sacrificing their lives for a story on the drug cartel overlord El Chingon.  But as the Dronez founder, Jack Black delivers this episode’s seriously silly one-liners (“Nice work, boys. We’re all really stoked about your next piece on vodka dicking.”). It’s one of the most accessible entries in the series even if it skews closer to a late night sketch.

The 1922 Inuit doc Nanook of the North is perhaps best known for passing off staged sequences (like igloo-building) as reality, which “Kanuk Uncovered” greatly exaggerates by turning Armisen’s Pipilok into a diva who hijacks the shoot (he requests a craft services table!) and starts using different camera angles much to the initial displeasure of Hader’s cameraman.  The Documentary Now! team tracked down the same period camera lenses to reproduce the look and feel of Nanook, making “Kanuk” the most visually-ambitious episode yet.

“The Eye Doesn’t Lie” puts its own spin on The Thin Blue Line’s distinctive style from a Philip Glass-style score to slow-mo reenactments (a sign-spinner’s murder; the strangely alluring shot of a creamscicle) to “expert” interviews discussing minutiae (“It wasn’t even the fun kind of trail mix…it was the real dry, raisiny trail mix!”).  Armisen naturally latches onto Randall Dale Adams’ weird accent and mannerisms, but Hader’s dryly-funny impersonation of David Harris is eerily exact. This episode is killer.

Ep. 5: “A Town, A Gangster, A Festival” (Hollywood)
Faithfulness to Source Material: ★

The quirky “A Town, A Gangster, A Festival” – about an Icelandic town that hosts an annual Al Capone Festival – features Armisen playing a very small role as an immigrant vying to win an Al Capone Lookalike Contest, and letting the Icelandic actors have the spotlight instead. There are plenty of great throwaway gags — a contest to push baby strollers down the stairs a la The Untouchables and The Battleship Potemkin — yet this feels more like a Christopher Guest mockumentary than a send-up of the ITV docuseries, Hollywood. Hey, no complaints here!

Ep 6. – “Gentle and Soft: The Story of the Blue Jean Committee” (History of the Eagles)
Faithfulness to Material: ★★★★★

The two-part History of the Eagles send-up, “Gentle and Soft: The Story of the Blue Jean Committee,” is surprisingly melancholy thanks to Hader’s and Armisen’s nuanced performances as gruff Chicago sausage-school dropouts who form a ‘70s California rock band. Using interviews with real music industry insiders — Cameron Crowe, Daryl Hall — as well as performances of original songs (“Catalina Breeze” is breezy, nonsensical fun a la Steely Dan) and “behind the scenes” footage, Documentary Now! closes out a terrific first season with a perfectly-executed rock doc worthy of VH1.

In addition to The War Room, Season Two is set to parody Jiro Dreams of Sushi and yet another Maysles doc Salesmen (watch the Season Two trailer below).  If Season One is any indication, we’re all in for an excellent, smartly executed lineup of spoofs.

0 comments on ““Documentary Now!” Fakin’ It As They Make It”