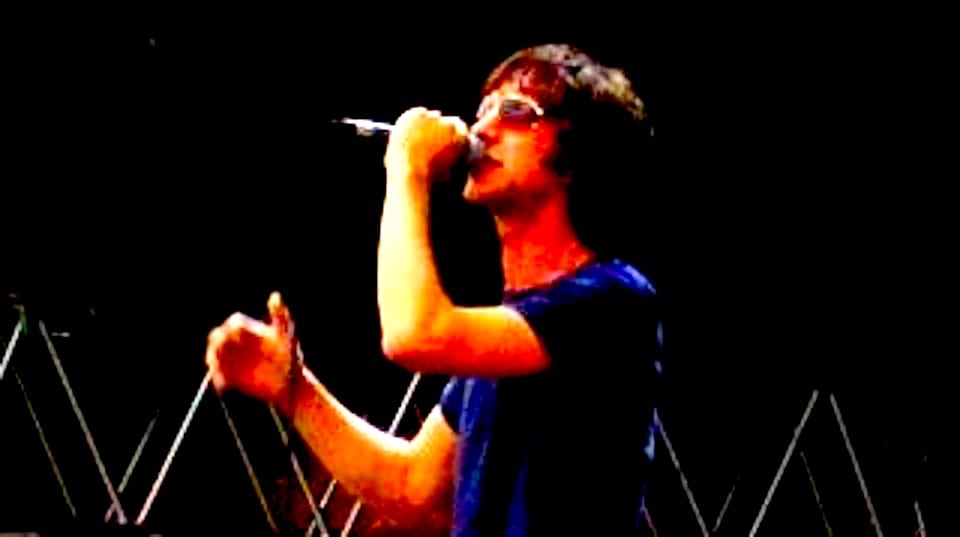 Staycations and weekend getaways are not the only ways to take a vacation when you’re broke. You can also get away from it all via YouTube, surfing through music videos in a way that can feel like a road trip through your own past. Here’s a recent journey I took through some music of the ‘80s and ‘90s.

This journey starts July 12th at Republic of Pie, a North Hollywood café, where two young dudes are playing ‘80s and ‘90s covers on keyboard and guitar. Their last song evokes a road trip my husband, John, and I took across country in our old Toyota. We were considering pulling over for the night when a familiar Violent Femmes lyric crackled from the radio: “Let me go on…like I blister in the sun….” The song’s energy propelled us to drive on through night. After hearing the Noho duo’s version, I sang it all the way home. I couldn’t get it of my head and so I tracked it down online. And listened again.

From The Violent Femmes, YouTube guided me to Blur’s “Song 2.” “I got my head checked/by a jumbo jet…” Hard to believe it but this song was initially intended as a parody of grunge. Among the YouTube comments, Farren Amarah gets it right: “(Damon Albarn) hated grunge but accidentally created one of the greatest grunge songs of all time, such irony!! Ò” The woo-hoo battle cry transports me to a seedy bar where cheap beers and angst flow in a sea of faded thrift store flannel. Who needs to go anywhere at all? I can feel this here and now.

I miss Kurt Cobain all over again so I click on Nirvana’s “Smells Like Teen Spirit” in the sidebar. Cobain recorded the song in a sound studio in Van Nuys, not far from where I sit now. “With the lights out, it’s less dangerous/here we are now, entertain us.” I turn out the lights then soak up the song a few more times in the dark. Why not? I would pour myself a beer if I had one. But there’s only Squirt in the fridge, a soda so pure it doesn’t even have caffeine. Squirt doesn’t go with this angst. What does are all the friends from my college years. Cobain sings: “Hello, hello, hello…”

“Cobain can you hear the spheres?” I wonder. Well, that’s The Red Hot Chili Peppers’ “Californication” so I surf over there. Wherever this virtual ‘there’ is. Is nostalgia a land like Sto’vo’kor where honorable Klingons go to die? Should I go stream old Star Trek episodes instead? What rock icons might I meet up with there? Amy Winehouse, Jimi Hendrix and Janice Joplin would be natural countrymen of Cobain at “…the edge of the world/and all of Western Civilization.” I grew up in L.A. This song nails it. California: this “first born unicorn” lotus land of dreams…

“Try to make ends meet/you’re a slave to money then you die…” I stare transfixed at Richard Ashcroft walking the London streets. He’s oblivious to everything in his path — except one moving car — as he lip-syncs in the “Bitter Sweet Symphony” video. This song cuts to the quick of why I’m taking this trip. It’s too late to do anything else. At this hour, most options are closed. But like the song says, I am “a million different people/from one day to the next.” How can I know what’s next? On the second play, I join in for “I’ll take you down the only road I’ve ever been down…” And wonder what turns in my personal road await. Memories flood my mind. I’m frankly too amped to sleep.

Time to enter the new millennium, to pull myself out of the past, at least somewhat. I forego YouTube’s suggestions of R.E.M. and U2. I take the driver’s seat. I pick Wheatus’ “Teenage Dirtbag” from 2000. “He lives on my block/and drives an I-Roc/and he doesn’t know who I am…” Brown based his song on his youth on Long Island where his teachers thought he was a homicidal devil worshipper because he liked heavy metal. I try to match his falsetto:  “Yeah, I’m just a teenage dirtbag baby/listen to Iron Maiden, baby, with me/oh…” But it’s too late for Iron Maiden. I’m no teen. I click off the computer, my mind a now-exhausted playlist, then finally drift off to sleep.