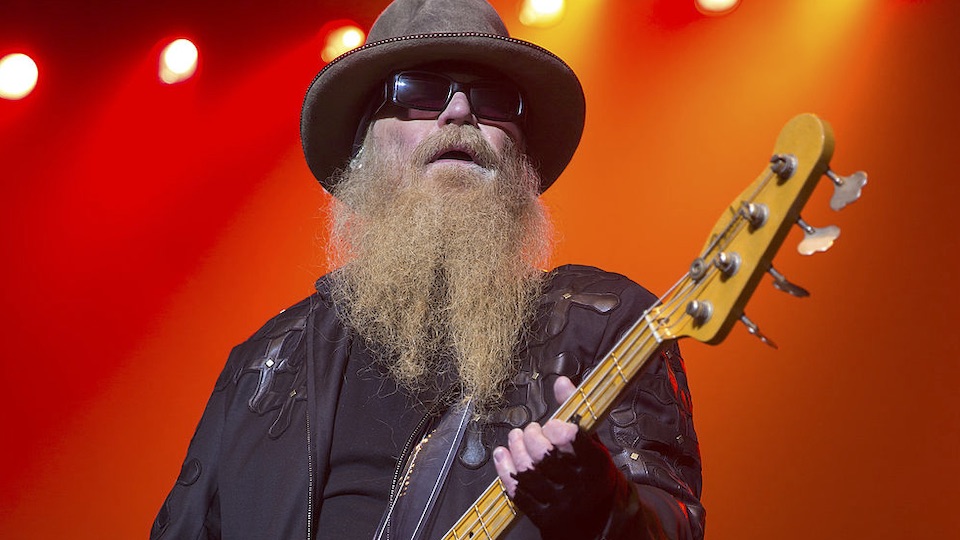 Editor’s Note: Bill Flanigin is one of our long-time writers. His musician-brother Mike has long performed with fellow Texans ZZ Top, giving Bill a chance to better know the band members, both from the front row and backstage. When word came of Dusty Hill’s passing last week, we knew there was no one better to sum up this loss to the rock world.

Dusty Hill was a rock star’s rock star. Scores of “blue check” musicians took to Twitter to express their condolences, as well as utter shock, at the passing of ZZ Top’s longtime bassist. He was 72. Rock legends the likes of Keith Richards, Peter Criss, Brian May, Nancy Wilson, and Bootsy Collins (to name just a few) paid tribute to Hill’s place in rock history, as well as his influence. Both are massive. Fans had their say too. And it was abundantly clear, they were hurting.

In a business where stylish lead singers or guitar players armed with nasty chops get most of the attention, it’s not uncommon for a band’s bass player to get lost in the mix. But Dusty Hill was impossible to ignore. Billy Gibbons and Dusty were dual frontmen, part and parcel in both sound and delivery, for one of the greatest bands in rock and roll history. During a career that started in the 8-track era and continued on into digital streaming, no band, none, produced more music and toured as extensively as ZZ Top. For over fifty years, they gave the fans what they wanted. Now, what do we do?

Texans like me, who grew up watching and listening to that “little ol’ band from Texas” grew proud to call them ours but were quite happy to share them with the rest of the world. ZZ Top never forgot to give a wink and a nod to their Texas roots. Whether it was a picture of sloppy Tex-Mex inside the gatefold of Tres Hombres or a shout-out to the city of Houston on El Loco, ZZ Top made us feel special. In North Texas, where I grew up, ZZ Top managed to unite the kids that smoked weed and the ones that dipped snuff. There’s no recipe for that kind of common ground. So as I sit here shuffling through the memories I made with my favorite band, I have to ask, now what?

I’ve written before that Billy Gibbons was made to be a rock star. After touring with Jimi Hendrix early on, he saw firsthand what it took to travel down that road. Not Dusty, though. He may have looked the part on stage wearing a Nudie suit or playing a fuzzy guitar, but after the show, he was a boots, jeans, and trucker hat kind of guy. A rock star that looked like a Texan.

Well, that’s not exactly right. Dusty was a little bit teddy bear, part Santa Claus, and one of the nicest guys in the business. The first time I met Dusty was backstage before a show. I happened to be wearing a Steve McQueen t-shirt and I’m almost positive he wanted to switch shirts with me. We talked about The Great Escape. On another occasion, he shared his philosophy on women. It wasn’t what I expected. His only relationship rule was, “Don’t fuck with my show.” And people say you should never meet your heroes.

The man sang like a southern preacher wailing from the pulpit. “Say, Lord take me downtown; I’m just looking for some Tush.”

A good church always has plenty of music. “Country Jesus, hillbilly blues that’s where I learned my licks.”

His fingers moved around the strings of a bass like a tarantula, creating a tone so big and heavy it managed to weld Frank Beard’s driving drumbeat to Billy Gibbons’ grizzled guitar. Hill never got enough credit for that because he made it look so easy.

During a show just ten days before he passed, an exhausted Dusty Hill plucked his bass while sitting on top of his amplifier. He didn’t have the energy to be up front where he belonged. The signature choreography he had developed alongside Gibbons was too tiresome to perform, but he played regardless. He did it for the fans.

Eventually, Hill left the tour and returned home to recuperate. On July 28th, it was announced he had died in his sleep. As the heartbreaking news of Hill’s death spread, fans like me immediately thought of the other guys in the band. What were they going through? For over half a century the band was always the same three fellas. It was Billy, Dusty, and Frank banging out La Grange on the Worldwide Texas Tour. It was Billy, Dusty, and Frank jumping around on stage in gray, oil-stained coveralls during the El Loco era. And it was Billy, Dusty, and Frank standing on the side of a lonely highway watching the Eliminator roadster fly through the dusty desert heat. It was always those three guys. Three men. Three friends. Tres hombres. And now it wasn’t.

It’s hard for fans to process the death of someone they loved and cherished, even if they really didn’t know them. Even harder perhaps when the person played the songs that were the soundtrack of their youth, one filled with wonderful music that made us smile. Forgive me if I’m getting a little sappy. Thankfully, as it goes with the musicians we admire, the art lives on.

A few days after Hill’s death, Billy Gibbons sat down for an interview with Variety Magazine.  In his grief, he confessed that the “waterworks” come and go.

For now, ZZ Top will continue to tour. As impossible as that sounds, Billy and Frank have earned the right to keep playing the music they love whenever and wherever they choose. It won’t be the same of course; they know that. On stage, when Billy glances to his right, Dusty won’t be there. That image doesn’t compute.