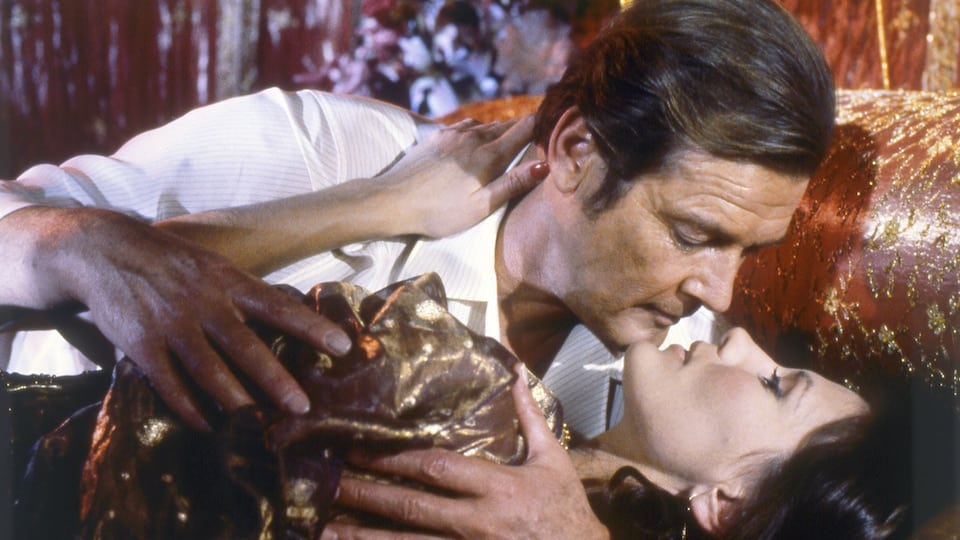 Spanning over five decades, the James Bond franchise has certainly been one-of-a-kind.  Britain’s top agent has unquestionably become the man every woman wanted and every man wanted to be. But the theme songs have proven to be part of 007’s allure just as surely as his signature one-liners, cars, and the endless parade of femmes fatales. Featured in opening credit sequences full of stimulating graphics, choreography, and trademark silhouettes, these songs have recruited the most successful contemporary artists of their time yet have proven timeless. Here’s how the various James Bond theme songs rank.

For Pierce Brosnan’s final Bond film, MGM recruited the Material Girl, quite a contrast to the alternative rockers Garbage from the previous movie: The World Is Not Enough. Her contribution features the most pronounced EDM influence and if it hasn’t aged quite as well as her cohorts, she at least scored a major commercial success hitting number eight on Billboard’s Hot 100.

The infamously-named Octopussy couldn’t afford to be as risque with the name of its theme song. Indeed, Coolidge was chosen in part because producer Albert Broccoli’s daughter constantly played her albums around the house because she wanted Coolidge to get the part. Looking back, “All Time High” sounds like the quintessence of Adult Contemporary 1980s-style.

Recently embarking on a solo career (sans The Pips), Knight’s “License to Kill” really illustrates how great the theme songs are in that a song this soulful and dramatic could still manage to rank this low. It’s no slight against Knight, who was an icon of R&B, so much as a nod to how high the quality of Bond songs generally are.

This Scottish pop star of the late ‘60s and early ‘70s was selected over Alice Cooper (of all people) who’d penned a heavy rocker for the movie following suit of the previous rock theme “Live and Let Die”, but wasn’t seen as commercially viable enough. Evidently Lulu belting to an orchestra heavy with brass was considered more on point.

With all eyes on a new Bond, George Lazenby, Barry opted for a profuse orchestral number. As good as it was, this theme was overshadowed by another tune in the movie: Louis Armstrong’s “We Have All the Time in the World” — a gorgeous song that plays over a love scene and which is akin to his unforgettable “What a Wonderful World.”

How did Duran Duran get enlisted for A View to a Kill? Simple. Bassist John Taylor drunkenly approached Bond producer Albert Broccoli at a party and said “When are you going to get someone decent to do one of your theme songs?” The resulting music video was a hit on MTV and the last single to feature the band’s classic 5-member lineup of “Rio” fame.

For Quantum of Solace, the pairing of Jack White and Alicia Keys isn’t simply unusual; it’s also the only duet of all the Bond theme songs. The track features Key’s strong vocals augmented by White’s heavy guitar as the two riffed off of each other to create one of the most distinctive 007 themes in recent years.

Crow produced one of the more seductive Bond themes for 1997’s “Tomorrow Never Dies,” yet in truth, many felt the theme was eclipsed by the end credit song.  “Surrender,” by k.d. lang, paid homage to the classic Bond themes of the ‘60s and ‘70s. Still, years later, we think Crow’s tune might deserve another listen.

The last of the Shirley Bassey trilogy of Bond tunes solidified her record as the only artist to perform more than one Bond theme, let alone three. That her least iconic one is still pretty good has us kind of longing for more old school orchestral arrangements that once typified this genre.

Don’t let Turner’s impressive vocals distract you from the fact that this song was written by Bono and The Edge. Yet with all due respect to that duo, Turner definitely takes this song to another level with a Bassey-esque delivery apropos of the franchise. Goldeneye re-energized the Bond series after a six-year hiatus with Turner and U2’s collaboration playing into the success.

Diamonds Are Forever marked not only the return of Sean Connery as James Bond, but also Shirley Bassey as the singer for its theme song.  Seven years after her Goldfinger debut, Bassey was called upon to contribute what many consider the highlight of the film.

The ‘90s were dominated by grunge, but not so much by James Bond. Come 1999, the decade witnessed a mere two 007 movies. Yet the franchise did squeeze in this Brosnan entry which opened with Garbage’s sultry theme. “I know how to hurt / I know how to heal / I know what to show / And what to conceal.”

With Casino Royale, a new Bond was introduced: Daniel Craig who showed a darker, grittier side of the character. In line with his portrayal, the producers recruited an alternative rocker who also had a bit of an edge: former Soundgarden frontman Chris Cornell whose contribution ranks as one of the heaviest compositions in the Bond theme canon.

Perhaps if it weren’t associated with one of the lesser Timothy Dalton Bond pics, A-Ha’s “The Living Daylights” would be better known. Regardless, the Norwegian pop group best known for “Take on Me” penned a catchier and more fluid theme than the one made by their ‘80s counterparts Duran Duran (ranking at number 19). The recording was fraught with tensions between the band and producer John Barry but you’d never know it by the final product which qualifies as one of the most melodic Bond tunes.

Who’s Matt Monro? Only one of the world’s most overlooked multinational superstars of the ‘60s and ‘70s (“My Kind of Girl,” “Walk Away”) Dubbed the “Man with the Golden Voice,” he’s also the only bona fide cabaret crooner associated with the Bond institution. Monro’s theme established the first use of lyrics in the theme songs, in a way becoming the first true Bond theme.

The evolution of the “Thunderball” started with a composition entitled “Mr. Kiss Kiss Bang Bang” intended for Shirley Bassey which eventually found its way to Dionne Warwick. A Johnny Cash tune was then under consideration although that was rejected as well. Eventually, the final product was a newly-written, slinky tune by Welsh sex symbol Tom Jones whose booming vocals fit the theme flawlessly.

Adele’s song for Skyfall was so well received that rumors started to swirl of a return for Spectre. No such luck. Instead that honor went to her fellow contemporary R&B stylist Sam Smith, who gave Adele a run for her money. Smith’s innate ability to caress with his voice makes “Writing’s on the Wall” an ominous tour de force.

The Summer of Love was in full swing when Nancy Sinatra brought a rather psychedelic twist to the lush Bond theme for You Only Live Twice. Originally John Barry wanted to get Aretha Franklin, while producer Albert Broccoli longed for Frank Sinatra to sing the song. Barry and Broccoli eventually compromised on Nancy Sinatra once Old Blue Eyes urged his daughter to perform it.

Sheena Easton was a meteoric star whose career seemed to have exploded overnight. Her hauntingly beautiful vocal performance for For Your Eyes Only so mesmerized the producers that they had her appear in the opening title sequence. For a moment, Sheena was for all of our eyes… and ears.

Fresh out of the gate, the first Bond film introduced the instrumental orchestral theme that we have all come to know and love. The iconic guitar riff has stood the test of time and has recurred in every bond so far. Without the music for Dr. No, this list would not have been possible.

John Barry was set on making the third Bond theme one to remember and wanted no one other than Shirley Bassey to sing it. A perfectionist in his own right, Barry pushed Bassey to her limit, even forcing her to hold the end note so long she nearly passed out. While producer Harry Saltzman’s thought it “the worst song I’ve heard in my life,” the world knows better. What almost ended up on the cutting room floor has proven to be the gold standard to which all Bond songs are compared.

The stunningly beautiful ballad for The Spy Who Loved Me encapsulates the movie’s love story concerning Bond (Roger Moore) and Soviet agent Anya Amasova (Barbara Bach) at the height of the Cold War. It also instantly became one of Simon’s biggest hits and outranked “You’re So Vain” as her longest charting single.

In the end, “Live and Let Die” is the track that truly feels like a James Bond film. It was the first theme song not to involve John Barry and was a reunion between McCartney and Beatles producer Sir George Martin. The explosive tune also provided Wings’ with their first big hit and was also the first rock arrangement for a Bond theme song.

0 comments on “Ranking All the James Bond Theme Songs”