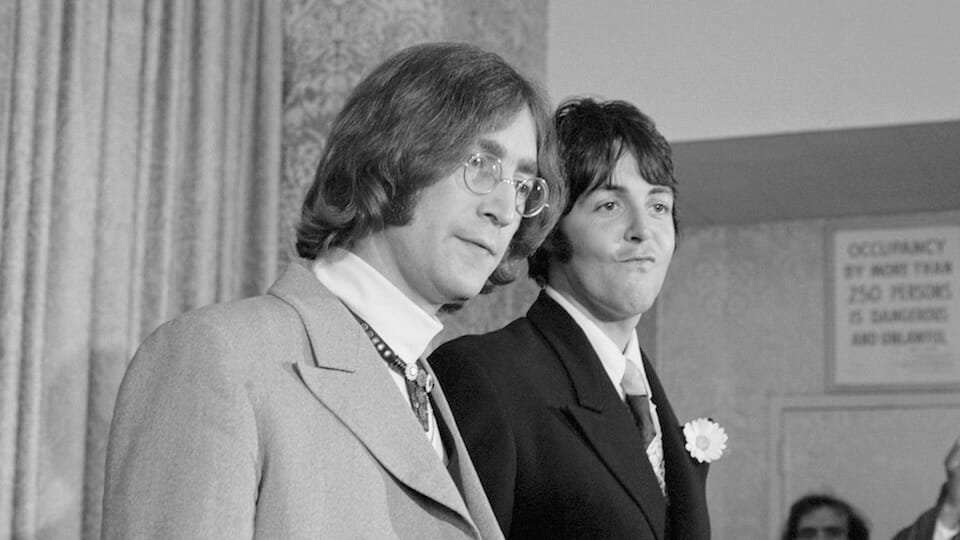 The most notorious song during the Beatles’ sprawling sessions associated with The White Album was, bar none, the tension-riddled recording of “Ob-La-Di, Ob-La-Da.” The song would require some 42 hours to record, with Paul McCartney leading his bandmates through numerous takes of the composition in a host of different styles.

See Related: “Everything Fab Four: The Esher Demos and the White Album”

The elaborate recording sessions for McCartney’s “Ob-La-Di, Ob-La-Da” began on Jul. 3, with McCartney on Fender Jazz Bass and piano, John Lennon on maracas and backing vocals, George Harrison on his Gibson J-200 acoustic, and Ringo on the drums. The song found its inspiration in the words of Jimmy Scott, a Nigerian Conga player who was fond of repeating the Yoruban expression “ob-la-di, ob-la-da, life goes on.” In an early rendition of the song, the Beatles fashioned a south-of-the-border reading of “Ob-La-Di, Ob-La-Da,” complete with Lennon’s enthusiastic preface: “Yes, sir! Take one, and the Magic Jumbo Band!”

Over the next several nights, the composition underwent numerous takes as the group attempted different versions of the song and Paul continuously tinkered with his vocal, testing his colleagues’ patience in the process. Things finally came to a head on Jul. 9, when John contrived the tune’s jangly piano introduction. “I am fucking stoned!” he announced upon entering the studio that evening. “And this is how the fucking song should go,” he said, before pounding out the famous piano opening.

See Related: “The White Album Is My Desert Island Disc”

In its finished state, “Ob-La-Di, Ob-La-Da” finds the Beatles turning in an admirable ska-inflected version of the song, with ambient studio voices in the style of February’s “Hey Bulldog.” Lennon and Harrison engage in playful banter throughout the track—at one point, Lennon spells out “H-O-M-E” in jocular response to McCartney’s lead vocal, which traces the simple story of Desmond and Molly, a pair of lovers who succeed in living happily ever after by evoking the homespun wisdom inherent in Scott’s Yoruban adage. The character of Desmond was a reference to Desmond Dekker, a renowned Jamaican ska musician who befriended McCartney during the 1960s.

The strife associated with “Ob-La-Di, Ob-La-Da” was not limited to the Beatles themselves. During a Jul. 15 session, Geoff Emerick witnessed George Martin shouting at McCartney about his lead vocal, and the balance engineer decided that he had to escape the tension-filled atmosphere. Having become increasingly depressed over the summer, Emerick resigned as the group’s balance engineer the very next day. But as far as Emerick was concerned, the band’s growing stress and strain had relatively little to do with their personal strife. The Beatles “were virtual prisoners of their fame,” he later remarked. EMI Studios “had no relaxation facilities at all; for them, it was more like working in a prison. Sure, there was a canteen downstairs, but they couldn’t go there for fear of being mobbed. Neither could they go out for a breath of fresh air, thanks to the ever-present legions of fans waiting outside.”

Emerick had also grown weary of newcomer Chris Thomas, George Martin’s protégé from AIR who had been fulfilling the elder producer’s duties when he was away from the studio. “Though he would tread carefully at times,” Emerick recalled about Thomas, “he began developing an attitude, an arrogance, that I just didn’t like. I felt that he had no business being there; he had no background or training, so why should we value his opinion? George Martin and I had been doing these sessions for years, with great success, and all of a sudden Chris had infiltrated the inner sanctum, without having ever paid any dues.” But the inner sanctum clearly wasn’t what it used to be, and between the Beatles’ sour demeanor and the presence of Thomas, Emerick could simply no longer stomach the turmoil.

And Emerick was by no means alone in his melancholy. On Jul. 19, Harrison and Martin quarreled, with the guitarist chiding the producer for being “very negative!” In spite of Emerick’s criticisms, Chris Thomas had emerged as the emollient that the band sorely needed — if only during the difficult days of The White Album. As tape operator John Smith observed, “I do seem to remember that with Chris being there, it was just a different vibe. I think they thought Martin was like a schoolteacher, sort of out of place, and with Chris, I think there was a much cooler vibe.”

With Martin increasingly absent from the console, the Beatles often operated without benefit of a producer at all. “I remember a lot of sessions where there was no one there producing,” Ken Scott recalled. “The Beatles were very much in control.” During Martin’s extended vacation in August and September 1968, Thomas had taken over the production duties in their entirety, with Scott sitting in as balance engineer. All in all, Thomas produced six songs during Martin’s absence, including “Helter Skelter,” “Glass Onion,” “I Will,” “Birthday,” “Piggies,” and “Happiness Is a Warm Gun.”

Not surprisingly, as far as Thomas was concerned, working with the Beatles was the opportunity of a lifetime: “The thing I always remember about them, and where they were different to all the other bands, was that they were very playful — in the way that kids are. You know, a bit mischievous like that,” he later remarked. “And that’s where a lot of the mad ideas came from. They’d just try anything, really, to see what it was like: ‘What happens if you do this, what happens if you do that?’ They were very different from anybody else in that way.”