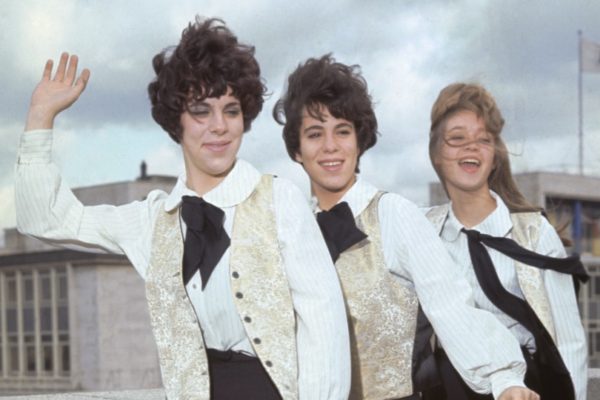 Much like the Academy Awards and its diversity issues, the Rock and Roll Hall of Fame has come under fire of late for its lack of gender equity. In response, The Academy of Motion Picture Arts and Sciences overhauled its nominations process by diversifying its voting membership; it seems rock’s Hall of Fame should do the same. In the 30 years since Aretha Franklin’s induction in 1987 as the first female member, only 37 other women have made the cut, including this year’s sole female inductee, folk music icon Joan Baez. The rest of the 317 members are men. Below are just a few of the women who deserve higher recognition pronto.

Technically, Nicks is already part of the RRHoF via Fleetwood Mac, but she deserves recognition as a solo artist too, just like each member of The Beatles, Rod Stewart, or Eric Clapton (who’s been inducted three times). Her 1981 solo debut album, Bella Donna, was certified quadruple-platinum and spawned four hit singles including the often-sampled “Edge of Seventeen.” Indeed, the prolific singer-songwriter has amassed both a huge catalog of music and a rabid fan base with Rolling Stone naming her both one of the greatest songwriters and singers of all time. Throw in her preference for shawls and platform boots and you have the makings of a fashion icon as well. Nicks is also frequently cited as an inspiration by current artists thanks to her crystal-clear alto voice and mystical live performances. This “Wild Heart” woman is more than overdue to take her place as one of the Queens of Rock and Roll. *Note: Stevie Nicks will now be inducted into Rock and Roll Hall of Fame in 2019.

Considering several of their contemporaries – such as the Ronettes and Martha & the Vandellas – are already part of the RRHoF, it’s kind of criminal these bad girls haven’t been accorded similar honors. A lot of girl groups sprang up in the ’60s, but the Shangri-Las stood out from the pack, literally, with darker, kitschy songs like “Leader of the Pack” and tough-girl personas based in Queens, NY. At a time when most tunes were about sweet young love, the Shangri-Las were singing about rebellion and death. Though only together for a brief period, their impact was great. Joey Ramone idolized lead singer Mary Weiss, frequently citing her as one of his biggest influences and even invited the Shangri-Las to play a special one-off show in 1977 at famed punk hangout CBGB. The Ramones are already in the RRHoF. Why not the leather jacket-wearing women who inspired them?

The self-nicknamed “Backwoods Barbie” is a country singer who transcends easy categorization. Staggeringly prolific, Parton claims she’s written somewhere in the vicinity of 3,000 songs, but her 1973 breakthrough hit “Jolene,” has been covered by everyone from the White Stripes to Tori Amos. You can’t get more crossover than that. Additionally, Parton plays at least seven instruments: guitar, banjo, dulcimer, recorder, piano, harmonica, and saxophone. At 71, she’s still regularly touring, performing high-energy 2-hour sets to sold-out crowds all over the world. She’s the most honored female country artist of all-time and is already in the Country Music Hall of Fame, the Nashville Songwriters Hall of Fame, the Grammy Hall of Fame, and a Kennedy Center Honoree. Rock needs to acknowledge her contributions, too. They did with Johnny Cash and Hank Williams.

The only all-female band to top the Billboard charts that wrote and played all their own music, the Go-Go’s remain the most successful all-female band of all time. Though this quintessentially New Wave act started in punk, they refined their sound on the road in Europe, eventually touring with the Police. Their debut, triple-platinum album Beauty and the Beat was number one within weeks and yielded two Top 20 hit singles (“We Got the Beat” and “Our Lips Are Sealed”). Despite a discography of three studio albums, The Go-Go’s still sold over 8 million copies in just three years. No small feat. Lead singer Belinda Carlisle went on to have a successful solo career on her own; the single “Heaven is a Place on Earth” from her second album became her signature song and led to a sold-out tour. Not including the Go-Go’s is just a huge no-no.

Eclectic and experimental are just two words that often get thrown out when trying to describe Kate Bush’s music, but the reclusive British singer-songwriter’s impact can be seen far and wide throughout pop’s current landscape from fellow recluse Sia to quirky Bjork to art-pop’s Florence Welch. Bush has always maintained strict creative control over her career; all the way back to her 1978 debut single, “Wuthering Heights,” which she pushed EMI to release rather than the more traditional “James and the Cold Gun.” Bush’s innovative music videos further enhanced her rep as a chimerical force by touring only twice in the last 40 years. Yet her work has earned her numerous accolades. Hell, even the Queen of England awarded Bush with the Commander of the Order of the British Empire (CBE) for her “services to music.” Surely if the Queen approves, the RRHoF should grant Bush similar status.

While the RRHoF has included many of the earliest pioneers of the genre, Sister Rosetta Tharpe has shockingly been snubbed despite her huge influence on some of rock and roll’s biggest names. Called the “Godmother of Rock and Roll,” Tharpe became famous as a gospel singer and guitarist in the ‘40s and ‘50s whose virtuosic guitar-shredding inspired everyone from Elvis to Johnny Cash to Jimi Hendrix. Though she falls outside the traditional “rock and roll” definition, Tharpe truly pushed the musical envelope and was ahead of her time. Think of her as the female equivalent of Bo Diddley, T-Bone Walker, or Muddy Waters. They’re in RRHoF and Tharpe should be there right alongside them. *Note: Sister Rosetta Tharpe was inducted into Rock and Roll Hall of Fame in 2018.

PS. While men do overwhelmingly fill the HOF, there are still some worthy candidates waiting to take their place in Cleveland. Read more about them in our post Rock and Roll Hall of Fame: And the Nominees Should Be…