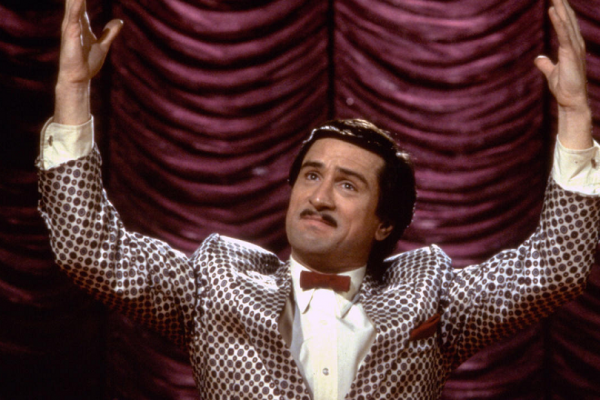 Summer typically means sweaty blockbuster sequels (Star Trek Beyond, Teenage Mutant Ninja Turtles 2) and hot superheroes in latex (Suicide Squad, Captain America: Civil War), but this year’s record-breaking temperatures aren’t just for perspiring Vulcans and mutants in heat. Film lovers can also take a dip into the recent past with stunning restorations of Blood Simple, The King of Comedy, and Howards End. It’s time to treat your Speedo-wedgied self to some essential viewings. Hey remember: this summer is almost over. The Labor Day weekend will provide you with more than enough time to watch all three. You won’t regret it!

Blood Simple (1984)
“The world is full of complainers. The fact is nothing comes with a guarantee,” croaks a morally bankrupt P.I. in the Coen brothers’ blood-soaked debut. Having seen this hard-boiled flick about 8,542 times, I will attest this 4K update (which ensures the visuals are as vivid as anything currently at the multiplex) will be welcome homework for fans of Fargo, The Big Lebowski, and No Country for Old Men. Created in 1984, when Reagan was mopping the electoral map with Mondale’s boxers, Blood Simple showcases the Coens’ signature blend of violence, humor, pulp and existentialism. Future Oscar-winner Frances McDormand (her first film) and John Getz play a pair of scheming lovers looking to knock-off a jealous husband. As you might guess, nothing goes as planned. After pints of spilled blood and plenty of double-crosses, the movie culminates in a showdown rivaling Hitchcock’s best.

The King of Comedy (1982)
What does Martin Scorsese get when he puts a gangster, a diva, and a nutty professor together in a single film? One of the most unlikely comedies ever, that’s what. With Taxi Driver, The Godfather Part II, and Raging Bull under his belt, Robert De Niro transforms now into Rupert Pupkin, a wannabe comedian living in his mother’s basement. (Imagine Travis Bickle in a polyester suit telling corny jokes to his furniture.) Like everybody on YouTube, Pupkin is driven by a desperate need for notoriety. Aided by a kooky celebrity stalker (Sandra Bernhard), he plots a course to stardom that starts with kidnapping a late night talk show host (Jerry Lewis, who plays it straight as a jaded star with no time for fans). Part social critique, part character study, The King of Comedy zeroes in on our obsession with fame, and as the poster aptly puts it, “It’s no laughing matter.” If you haven’t seen this Scorsese masterpiece, now’s the time. It couldn’t be more relevant (and now looks flawless).

Howards End (1992)
Ahhh, the ‘90s… Besides being a great time for grungy rockers and horny commanders-in-chief, the decade also brought a run of gorgeous literary adaptations by director James Ivory and producer Ismail Merchant. For me, A Room with a View (1985), The Remains of the Day (1993), and Howards End were a gateway into serious literature. Nominated for nine Academy Awards, Howards End stars Anthony Hopkins (in one of his best performances), Emma Thompson, Vanessa Redgrave, and Helena Bonham Carter (long before she became Tim Burton’s weirdo muse). The plot is simple: At a house called Howards End, three families from different social classes take turns owning it, where they backstab and lust while they’re there (a.k.a. typical British period piece). Economic and gender inequalities get a thorough spanking here, albeit an Edwardian one. The 4K restoration, in celebration of the movie’s 25th anniversary, lets you experience the Oscar-winning art direction in all its glory.

0 comments on “Three Modern Classics Return Looking Better Than Ever”