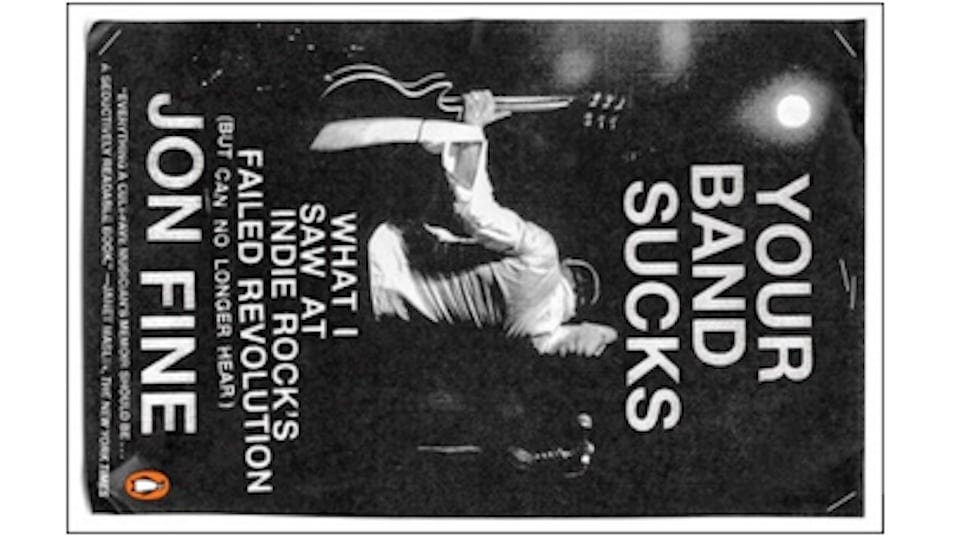 The provocative title of Jon Fine’s memoir – Your Band Sucks: What I Saw at Indie Rock’s Failed Revolution (But Can No Longer Hear) – may have been devised with out-facing book shelves in mind. But, it is well-chosen and completely true to the world he writes about, where music was used as a tool of cultural assault, visceral stimulation, and tribal affiliation and exclusion. If you can’t get beyond the title of this book, then . . . read it anyway. Behind the feedback, the van grunge, and the hangovers is a very engrossing and even touching coming-of-age story.

The book came out last year, written when Fine had reached his mid-forties, and a few years after completing an 18-month reunion tour with his first successful band, Bitch Magnet. The narrative follows Fine’s journey from rebellious NJ teenager to Oberlin nerd to band guy skipping classes to full-on indie musician to working guy to . . . ?

It wouldn’t be fair to try to characterize where Bitch Magnet falls on the hierarchy of musical groups that a general readership would relate to. Fine does that himself throughout the book, which is a central theme: if you took up music in the first place to rebel against record labels and established cultural arbiters, then achieving recognition beyond hardcore tribal members is not your goal (ah, but what about secretly craving recognition and approval?). Some more familiar reference points might be Sonic Youth, Mission of Burma, and Pixies.

The indie music scene that Fine came of age in spanned roughly the mid-80s to the mid-90s. Hardcore punk had arrived a decade earlier, so Fine’s cohort was raised on Stooges, Ramones, and Sex Pistols. The so-called rock revolution of the 60s had long ago been co-opted by major record labels and tamed for mass consumption. And that had already been trashed by punk, metal, and rap. So what’s a suburban kid to do, especially when the Internet hadn’t been invented yet?

Thousands of them started bands, often beginning with the name, then the poster, and then as an afterthought, choosing instruments to play.  The arsenal of weaponry was powerful and affordable. Every college campus had a radio station and a venue, and every city had a grimy bar and a used record store where members of the tribe could gather to pay tribute to their obscure warriors. These were the precursors to Nirvana, and in breaking through, Nirvana marked the beginning of the end of the indie revolution; plaid became the uniform, and the movement wasn’t supposed to have uniforms.

Fine is a wonderful writer and somehow managed to keep one eye trained on the context of the indie revolution while the other was getting bloodshot and bleary. He participated fully, but understood what he was going through. This is why the book is worth reading: it is honest, reflective, and filled with irony and humor. But where the story might be expected to end by showing how one leaves the music scene and finally grows up, Fine holds back. And this gives us pause to reflect about art and the yearning to make a joyful noise, even one at 120 decibels.

0 comments on “Living Through the Pre-Internet Indie Rock Explosion”