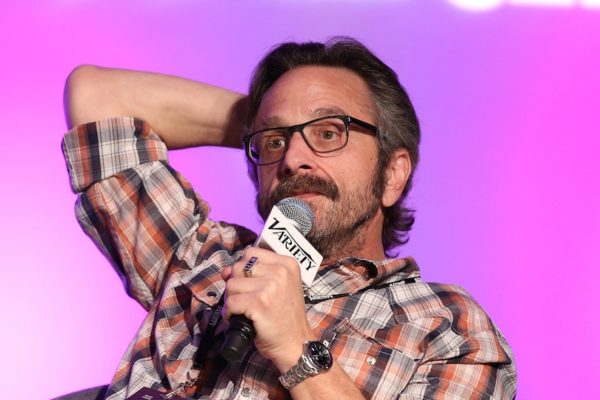 The most succinct description of Marc Maron is that he loves cats. It’s no wonder; they’re just like him: neurotic, distrustful, intrusive, finicky, and, man, can they hold a grudge. Also like him, they’re extremely curious, independent, loyal, and even cuddly. Marc Maron brings this wonderful contradiction to his wildly successful acronymic podcast, “WTF with Marc Maron,” now in its sixth year. A noted stand-up comic for 25 years, Marc began this podcast at a career lowpoint. Broke and in the middle of a nasty divorce, Marc began recording podcasts by interviewing comedian friends in stolen studio space at AirAmerica, where his show there had been canceled (twice). He began by exclusively talking to other comedians with his only ambition being, at this point, simply to find out what everyone else was doing right in their careers so he could start doing that. This eventually became the WTF Podcast, recorded from the garage in his home (“The Cat Ranch”) in Highland Park, CA, which he shares with his three equally notorious cats.

In the years since his inaugural podcast on Sep. 1, 2009, he’s achieved a lot of traction in the podcasting world and has moved on to conversations with celebrities, newsmakers, musicians, chefs, directors, journalists, and artists; anybody he thinks might have a story worth telling. In an interview with Huff Post Live in 2014, Marc described his process of selecting guests: “If somebody has got some charisma, is part of something interesting, or has some juice, I want to connect with that.”  His interviews alternate between raging rants against perceived (usually ancient) slights, therapy sessions, investigative journalism, conversations with friends, and celebrity confessions. He can talk a mean streak and he’s funnnnnny. But, above all, he’s a great storyteller.

With over 650 episodes under his belt, Marc has a hit list of high and low profile guests too numerous to mention, ranging from Keith Richards to Barack Obama to Phil Stutz (Hank Azaria’s psychiatrist). At turns deferential and confrontational, he has the uncanny ability to get to the heart of his guests within minutes and has them revealing things they may never have said before in a public forum. His 2010 breakout interview with Robin Williams, when he openly discussed his crippling insecurity and struggles with addiction and divorce, put him on the satellite radio map. He humanizes his guests. Anyone, no matter how storied or accomplished, becomes the “every man”, giving listeners reason to feel they have a valid seat at the table. His double session with Louis CK, named “Best Podcast Ever” by Slate, took a deep dive into rifts in their friendship caused by Maron’s obsessive career jealousy.

I came late to the party (a phrase Marc is fond of using) just this year when my Netflix recommended his IFC cable series Maron, which premiered in 2013. Desperate, and not fully recovered from the loss of having binge-watched the last episode of Louie, I half-heartedly tried it and was hooked from the start. Like Louie, Maron is a fictionalized version of the comedian’s real life, in this case, as a garage podcaster trying to figure out where he fits in the world.

With all of his success, Marc’s most personal work might just be his offering: Marc Maron PodCats.  That’s right, PodC-A-T-S, a podcast of 5 minute episodes featuring his cats, Boomer, Monkey and LaFonda, as voiced by him and his comedian friends. It’s a forum for the felines to clear the air, so to speak, about perceived micro-aggressions in their world. These sessions can be contentious but, borrowing their human companion’s go-to catchphrase, they are amiably resolved with “so, we’re good?”

You gotta love a guy who’s into cats!