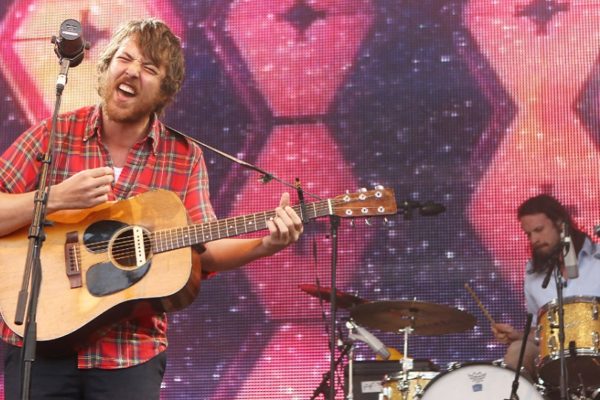 On the title track of indie folk band Fleet Foxes’ 2011 sophomore release Helplessness Blues, front man Robin Pecknold is struggling to come to terms with what kind of man he wants to be but promises, “I’ll get back to you someday soon you will see.” But it wasn’t soon. In fact, he and the band nearly didn’t return at all. After that critically-acclaimed album, Fleet Foxes took a six-year hiatus. Pecknold felt lost and “one-dimensional,” so he spent some time backpacking all over the world and a year learning woodworking in a tiny town in Washington. Then at age 26, he moved to New York City and enrolled at Columbia to study humanities, shaving his head and becoming, in his words, “a clean-cut school guy.” Pecknold hunkered down in academia for three years, alternately writing literature papers and songs until he realized he needed to make music again. He told Rolling Stone, “I liked writing papers, but I sort of noticed that they were always like, ‘The role of music in Ulysses,’ you know? Every class.” Finally in late summer of 2016, he reunited with his bandmates to start work on a third album: Crack-Up.

Like the 1936 F. Scott Fitzgerald essay with which it shares its name, Crack-Up is about oppositional ideas, instability, perceptions, and coming to terms with the true self in the midst of chaos. If Fleet Foxes’ debut album was mostly sunny baroque folk, and their second, a mild existential crisis, then Crack-Up is the sobering conclusion where Pecknold watches as institutions and people, including himself, crumble in front of his eyes. While he makes observations both political (“If You Need To, Keep Time On Me”) and social (“Cassius,” which references Alton Sterling’s death), the singer-songwriter’s gaze is mostly inward. The young man who seemed cautiously optimistic about the future at the end of Helplessness Blues is now in turmoil — using enigmatic lyrics full of references to Civil War locations and Biblical verses to reveal anxiety, doubt, and depression. If it sounds heady, that’s because it is. The album is as firmly rooted in the head as the Fitzgerald essay that inspired it. As Pecknold puts it, “What have I got if not a thought?”

This intellectual confusion is reflected in the music too, which is richer, bolder, and more avant-garde than anything Fleet Foxes has previously released. Pecknold is determined to push the band beyond baroque folk, opting for denser arrangements incorporating brass, woodwinds, strings, and looping machines along with the usual guitars, piano, drums, and multi-layered harmonies. Many of the tracks are lengthy with various tempo changes and distinct sections threaded together to form mini-suites. Lead single “Third of May/Odaigahara” clocks in at 8 minutes and 45 seconds, starting off like a straightforward folk song before devolving into something a bit slower and darker. Another track, “Mearcstapa,” features rather unusual guitar-tuning and opposing time-signatures, which Pecknold admitted was purposeful, so it felt like “a Beach Boys song with a Can song being played on top of it.”

And if anyone knows about mining psychological turmoil and yearning to produce progressive, boundary-pushing music, it’s Brian Wilson. His own mental anxieties caused him to step back from touring with the Beach Boys in the mid-1960s and focus on composing and recording. Wilson’s mental break ultimately produced the Beach Boys’ 1966 masterpiece album, Pet Sounds, which, like Fleet Foxes’ Crack-Up, is densely orchestrated, musically complex, and far moodier than their previous musical output. And like Fleet Foxes after their second album, Pet Sounds arrived at a time when the Beach Boys were beginning to splinter; Wilson wanting to move in a different direction from the band’s sunnier, surf-friendly pop/rock. You can hear that conflict reflected in the album’s songs. Opener “Wouldn’t It Be Nice” sounds like vintage Beach Boys whereas “I Just Wasn’t Made For These Times” is downright mournful. F. Scott Fitzgerald may have been Pecknold’s main inspiration for Crack-Up, but Brian Wilson’s influence on the 31-year-old Fleet Foxes front man is very apparent both musically and spiritually, too.