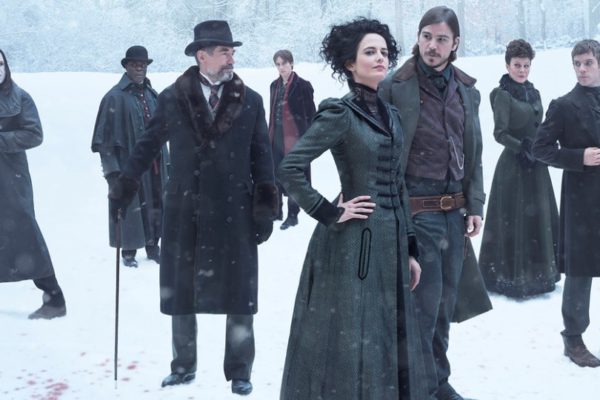 Seeking a thrilling team-up of horror icons? Look no further than Penny Dreadful, a fantastic Showtime series created by John Logan, the screenwriter behind such well-regarded films as Gladiator and The Aviator. This fascinating Victorian-era horror saga features characters from the novels Dracula, Frankenstein, Dr. Jekyll and Mr. Hyde and The Picture of Dorian Gray. These well-known characters interact with each other in a terrifyingly suspenseful story that’s much more than just pastiche, because the series takes on dealing with one’s inner demons as much as it showcases vampires and re-animated corpses.

The story concerns Vanessa Ives (Eva Green), a powerful medium haunted by a troubled past. She’s helping Sir Malcolm Murray (Timothy Dalton) locate her friend and his daughter Mina (Olivia Llewellyn) who’s been kidnapped by unearthly forces. Their shared quest brings them into contact with Ethan Chandler (Josh Hartnett), an American sharpshooter with a dark secret, Victor Frankenstein (Harry Treadaway), a doctor conducting unorthodox research and experiments, and Dorian Gray (Reeve Carney), a charming rogue with secrets of his own. Their paths will also intertwine with those of Dr. Frankenstein’s creation (Rory Kinnear), a creature initially known as Caliban, the mysterious Dr. Henry Jekyll (Shazad Latif), and a dying prostitute named Brona (Billie Piper). As the series progresses, Vanessa emerges as the show’s central character, a woman whose choice between the light and the darkness will have lasting repercussions for everyone.

She’s not the only strong female character though. One of the hallmarks of Penny Dreadful is that the show is chock full of them. Piper (best known as Dr. Who companion Rose Tyler) pops up not just as a doomed prostitute but also a proto-feminist version of the Bride of Frankenstein. Tony-winner Patti LuPone appears twice, first as Vanessa’s mentor and then as a gender-switched character from Bram Stoker’s Dracula. The men in the cast also make a strong impression; Hartnett does some of his best work to date; Dalton proves effectively heroic post-Bond; and Kinnear turns in a multi-layered performance as Dr. Frankenstein’s tortured creation. His unforgettable scenes with Green in the episode “A Blade of Grass” should have netted them both Emmy nominations.

John Logan — who wrote the lion’s share of the series’ 27 episodes — crafts a spellbinding tale that both re-invents and pays homage to its classic sources. Penny Dreadful takes its iconic characters on intriguing journeys via a plot that often pivots and turns in directions that you’d never expect. Literate, expertly acted, and skillfully directed with sumptuous costumes and fantastic production design, the series features a crypt full of eerie, creepy and horrifying moments. Sure, the show (executive produced by Sam Mendes of Skyfall and Spectre) only lasted three seasons, but that simply makes it easy for binging, especially now that it’s available on Netflix.