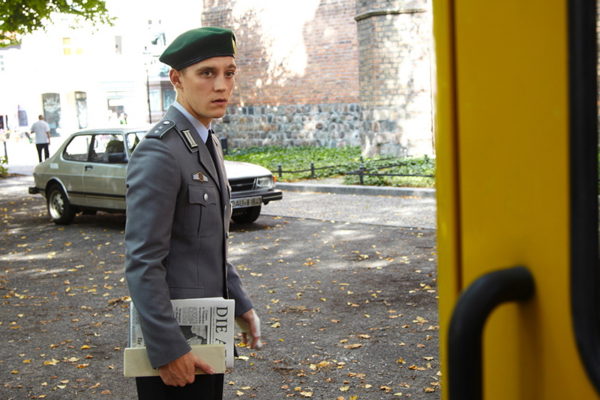 Foreign films have long been part of American movie-going diets. Even the Oscars have a category for it. But now, thanks to a number of recent series — Deutschland 83, Gomorrah, Narcos, Occupied, The Returned — subtitles are also periodically appearing on our TV screens, too. Suddenly our viewing habits aren’t quite so domestic. In fact, our tastes are expanding to international proportions. With their complex plots, nuanced acting, and cinematic visuals, these shows prove reading subtitles isn’t that off-putting even on a small screen. The art-house experience has been serialized! Here are five series (either exclusively or largely NOT in English) that you should welcome into your home…pronto.

If this German historical drama were a student, he’d be an overachiever. Currently sitting at 100% on RottenTomatoes, Deutschland 83 was an unexpected late-night hit for SundanceTV. Like The Americans, the series is set in the 1980s and follows a Communist agent working in the west. But here, the East German side — via Martin Rauch (Jonas Nay) — joins the West German army as a Stasi spy. After the show aired in Germany following its American premiere, a second season is already in the works.

This other SundanceTV series broke records during its first two seasons in Italy. More The Wire than The Sopranos, this gritty drama is based on Robert Saviano’s chronicle of the Neapolitan crime organization, The Camorra (the source for Matteo Garrone’s 2008 film of the same name). From its opening scenes, Gomorrah establishes exactly how far Don Pietro Savastano (Fortunato Cerlino) will go to keep the family in power, and the series doesn’t back off from there. A third season is slated for release in Italy soon, which is likely not soon enough for its fans abroad or stateside.

This Netflix original digs into the intense, graphic recent history of Colombia’s drug cartels, centering on Pablo Escobar. Wagner Moura stars as the kingpin, and his performance definitely anchors the show. Audiences have dug drug-fueled drama in the past (remember Breaking Bad?) but Narcos gets bonus points for its “true history” aspect. Set and filmed in South America and with much of its dialogue in Spanish, Narcos is an epic series, with a scope expanding beyond Escobar’s origins into the following decades. With two strong seasons, Netflix has renewed for a third and fourth. Watch and you’ll see why.

For those who can never get the next season of Homeland fast enough, Netflix has acquired this Norwegian thriller set in the near future. Created by bestselling writer Jo Nesbo, Occupied depicts a world in which a Green-Party Norway has ceased all oil production. With the EU’s backing after an ensuing financial crisis, Russia invades then restarts the flow of oil to the continent (a plotline that really disgruntled the Russians!). The US may not be a player in the story, but that doesn’t mean that Americans can’t enjoy this smart series.

Not to be confused with the short-lived American remake on A&E, SundanceTV’s engrossing French series is so much more than a zombie drama. The Returned does concern itself with what happens when a number of formerly dead people return to a small town in France, but it’s more about brains than “BRAINS!” Unlike the oft-times gory The Walking Dead, this moody thriller is preoccupied with grief and its lingering effects. Its second season took two years to make. Perhaps Season 3 will arrive in 3?