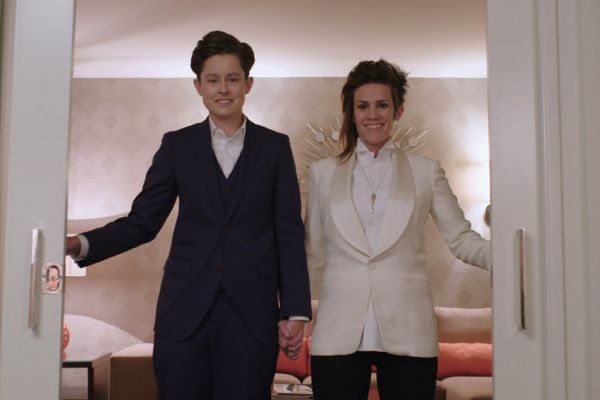 Never heard of Seeso? It’s a relatively new streaming site devoted exclusively to comedy. A cross between Netflix and Funny or Die, with a delightfully extensive section of classic British TV (Fawlty Towers and Monty Python, anyone?) and more stand-up clips than you could ever hope to watch. Even so, as Netflix, Amazon, and Hulu have shown, the only way to earn a place as a viable content provider is with original series. And with their immensely enjoyable sitcom Take My Wife, Seeso is definitely gaining traction. At a mere $3.99 a month (the first month’s free), it’s a pretty cheap gamble.

If you’re a stand-up fan, you’ve likely heard of Cameron Esposito, the frightfully insightful lesbian comic whose signature look inspired her opener: “as you can tell by my side mullet, my gender is Thundercat.” You may not have heard of her wife and fellow comic Rhea Butcher. Something, Butcher at least, would very much like to change. And that is pretty much the premise of Take My Wife. The two women (in what is fast-becoming a millennial trope) play humorously heightened versions of themselves in a humorously heightened version of their lives. Season 1 takes place in the year leading up to their wedding, as a starry-eyed Cameron basks in her newfound success while Rhea is saddled with student loan debt, and stuck choosing between her passion for comedy and her soul-crushing day job.

The first scene is a flash-forward to after the wedding. The rest of the series is basically an extended flashback charting how they made it to the engagement. But from the get-go, you’re left in no doubt that these two people love each other. Deeply. There are no tortured struggles with sexuality. There are no questions about whether they’re meant to be soul mates. (They are!) Instead, Take My Wife simply mines the comedy that comes with the territory of longtime partnership. The capers sometimes veer into the outrageous (Rhea spends the better part of an episode pushing a “borrowed” couch all over L.A. so Cameron’s parents might have somewhere nice to sit when they visit) but most of the time Take My Wife sticks to finding laughs in everyday situations. Issues like the head-banging nature of being a woman in comedy, weighing dreams against paychecks, and honestly who really is responsible for cleaning the cereal bowls, are ripe for witty exploration.

Rounding out this world is a truly talented supporting cast that includes Zeke Nicholson as Rhea’s skateboarding buddy (“I blew off a Sadie Hawkins dance for this!”) and the legendary Laura Kightlinger (Anchorman, 2 Broke Girls) as an insane, dumpster-diving neighbor. Cameos from Maria Bamford (Lady Dynamite), Matt Braunger (Successful Alcoholics) and Janet Varney (You’re the Worst) pop up like Marvel Easter eggs.

From Seinfeld to Curb Your Enthusiasm to Louie to Master of None, we’re pretty well-schooled in the “pseudo-fictional window into the artist’s life” at this point. And yet, Take My Wife manages to be an invigorating breath of fresh air because its two leads extend the premise into a community that too often is pushed to the sidelines as “added spice.”

In fact, for a show where the majority of disrobing happens because Cameron continually steals Rhea’s clothes, there is no shortage of spice. Butcher and Esposito’s onscreen chemistry is palpable. Whether it’s the small quirk of how close their faces are when they speak, or the accidentally grand gesture of confessing their happiness with one another on stage, their relationship feels more believably intimate than many a televised bedroom scene. This realness makes their hopes and dreams feel accessible. You can’t help but root for them. In the current heyday of anti-romcoms (Love, Casual, UnReal, Transparent, Crazy Ex-Girlfriend), Take My Wife’s celebration of a loving relationship in all its inherent weirdness is a joyful little bubble of hope.