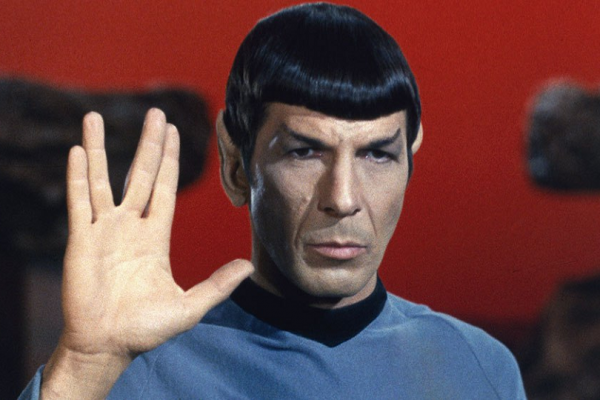 Star Trek‘s behind-the-scenes history has been explored almost as thoroughly as the galaxy within its fictional universe. Considering that makes it better documented than some real-world civilizations, it’s not unreasonable to wonder if we need another documentary about it. However, when the subject is Star Trek‘s most iconic character and it’s made by Leonard Nimoy’s son, who’s a director in his own right, it’s only logical to welcome the recently released film For the Love of Spock. Adam Nimoy’s initial plan had been to collaborate with his father on a film about the character of Spock. After his father’s death early in 2015, he broadened the film’s focus to include Leonard Nimoy’s life and relationship with his family. This obviously makes For the Love of Spock a more personal film, though not always for the better.

Certainly the juxtaposition of Mr. Spock’s universal appeal with the individual recollections of the people who knew and loved Leonard Nimoy makes for some fascinating moments. At the same time, the younger Nimoy’s decision to make his often-strained, though clearly loving, relationship with his father intrinsic to the film’s broader narrative doesn’t always work. There are some interesting anecdotes, particularly the aftermath of a magazine accidentally printing the family’s home address as the place to send fan mail, but overall the material about the father-son dynamic isn’t quite as interesting as the director seems to think.

He’s much more successful when using the recollections and reflections not just from past and present Star Trek cast members but also family, friends and fans to paint the picture of both his father and his famous alter-ego. Likewise the use of archival footage – especially from the original Star Trek series – encapsulates both the many facets of Spock and the path that lead to Leonard Nimoy playing him. Both aspects are nicely complemented by interviews his father gave over the years as well as narration drawn from the audiobook edition of his 1995 memoir I Am Spock.

There is, of course, no shortage of memorable moments throughout the film. Some elements, particularly Leonard Nimoy explaining the genesis of the Vulcan salute and nerve-pinch, are probably well-known to dedicated Star Trek fans but still enjoyable to revisit. Others are quite humorous, such as Seinfeld star Jason Alexander’s imitation of William Shatner’s delivery, or fairly esoteric like the discussion of the homoerotic undertones some perceive in the relationship between Spock and Kirk. Others are a bit of both of both, exemplified by intercutting footage of Star Trek‘s bridge crew with the music video for the “The Ballad of Bilbo Baggins”.

Above all, For the Love of Spock is the story of a life lived fully on and off the screen. By Leonard Nimoy’s own admission, for much of his life, he had “a major in career and a minor in family,” but the film makes it abundantly clear that his devotion to his family was the driver of his focus on that career. That combined with embodying a character who – despite what many (foolishly) labeled a satanic appearance – represents the better angels of human nature suggests that posterity will look as favorably on Leonard Nimoy the man as it will on the character of Mister Spock. It’s hard to imagine a better tribute to Star Trek and the hopeful vision it depicts as the series celebrates its 50th birthday.

0 comments on ““For the Love of Spock”: A Salute to Leonard Nimoy”