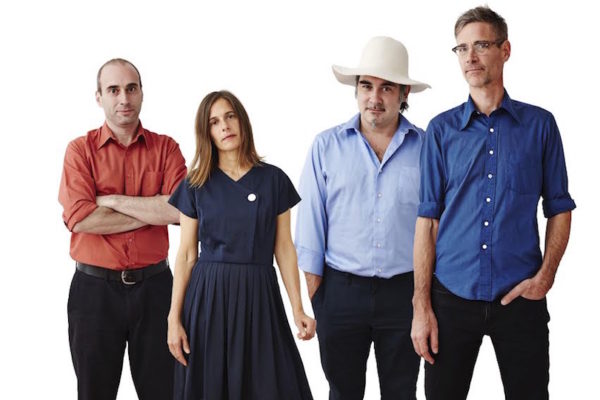 After two well-received EPs — Dress Up (2012) and The Stolen Souvenir (2010), the indie pop band Little Silver has finally released the debut album Somewhere You Found My Name. Rolling Stone has called the record “elegantly understated,” while the Associated Press has commended its “delicious vibe.” Indeed the results are wonderful and astonishing. Whether the magic can be attributed to the inspirational addition of drummer Ray Rizzo and bassist David Tarica or the unique, ongoing chemistry of frontman Steve Curtis (of Hem) and frontwoman Erika Simonian (of The Sprinkle Genies) is impossible for us to say. But that didn’t stop us from asking Simonian and Curtis a few questions to see what we could find out.

Q: You share credit on all the songs on your debut LP Somewhere You Found My Name. Do you two have a set method of creating songs or does it vary from tune to tune?

A: It completely varies from tune to tune, and it’s easier just to say that all are “co-writes” than to split hairs. It worked for Lennon and McCartney! Until it didn’t. Let’s hope this system of attribution doesn’t wreck both our band and our marriage. But, in short, there are some that are entirely collaborative from the start, some that are split lyrics/music one way or another, and some that are pretty much not co-writes at all until they get inevitably burnished in the process of finishing them and bringing them to the band.

Q: This album has a much denser, richer orchestration than your first EP The Stolen Souvenir. What inspired you to expand the musical palette?

A: A few things… We’ve met and begun working with musicians who have totally shaped the way we sound when playing live, and they are very much now part of Little Silver; we wanted to represent that sound to a broader audience. We also wanted to rock out some, and build song structures that could support a little bit of that frenzy. And we wanted to really stretch out and take our time in the studio, letting the recording process, and the hand of our co-producer and engineer Gary Maurer, play a bigger role in how this material came together.

Q: The song “One Stepper” definitely has welcome shades of Blondie, both in attitude and instrumentation, while the opening of the record’s title song sounds almost Cohen-esque. But who would you say are your biggest inspirations and major influences?

A: Such a good and difficult question. We always want to know the answer to this from people we listen to. Like every other band from forever, Little Silver is a mess of imprints from other artists who are tough for us to even identify, much less tease out. But a partial list would definitely include Gillian Welch and David Rawlings, Yo La Tengo, X, and Justin Vernon (Bon Iver).

Q: You devoted your second EP Dress Up to covers but is there a song that you’d still love to hear your partner cover? Why?

Steve: I’d love to hear Erika sing David Byrne and Brian Eno’s “Everything that Happens.” It a gorgeous, soaring, bizarre song and it deserves to be better known. Not that we’re the ones to carry it there, but it’s a start….

Erika: I wanna hear Steve do The Kinks’ “Strangers” — one of my favorite songs, and I can watch his face scrunch up when he hits the high notes.

Q: Your band has toured off and on since forming in 2010. Do you have a favorite city to play in?

A: Well, New York City tops that list. It’s been home for a long time. It’s also an obvious choice. So how about Millheim, Pennsylvania, a fantastic crossroads in Central Pennsylvania Amish country that is packed with musicians and people who care about music, and good food, and good beer.

Q: If you had to pick one Little Silver song as an intro to someone curious about the band, which one would it be?

A: Maybe “Anytown”? It trucks along pretty much right out of the gate, but also shows off what is maybe a bit odd and awesome about Little Silver.

PS.  An update on one of the musical influences listed above, plus our humble list of some of the best albums of the year (so far).