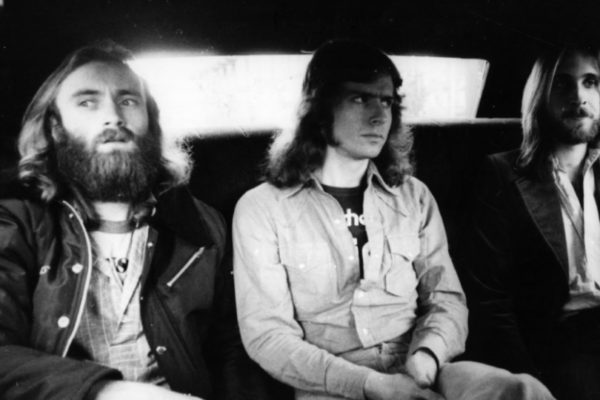 This timeless post, from back in 2017, is one of our all-time most viewed. And with good reason. It seemed a good time to re-visit it…

There is a reason why “This Is Spinal Tap” is must-see viewing on rock and roll tour buses. Some of the most diehard fans of the 1984 mockumentary are those who work in the music business: artists, roadies and tour managers, who know all about band members getting caught inside stage props, bizarre rider requests and even drummers dying in bizarre gardening accidents! Genesis tour manager Regis Boff is no different. In fact, he may have participated in one of the most Spinal Tap moments in rock history. Here, in his own words, Regis tells us all about it.

I was responsible for what is arguably rock’s most embarrassing moment.

A standard early-to-mid-70s Genesis show finished with Peter Gabriel dressed in his “Magog” outfit: a long velvet black cape and a giant triangular headpiece. Towards the climax of the show, Peter would throw off his hat and cape to reveal himself in a silver jumpsuit. We made him momentarily invisible by detonating controlled explosions that came from metal pods at the front of the stage. The audience was blinded and dazed so it made for an excellent finish. We filled these canisters with a martini of flash and gunpowder that would be criminally outlawed today, whereas back then it was quietly banned. We never told anyone we were going to do it. One of our roadies filled them a couple of hours before the show and set them off just at the right moment.

This incident took place sometime between 1973 and 1975, either in Cleveland or Berlin (Believe me, in my world that is terrific accuracy!).

Someone had the inspiration to “fly” Peter into the air while the audience was blinded (it was most likely Peter himself). He’d be hoisted fifteen feet into the air by nearly invisible thin metal wires and finish the song floating in a silver jumpsuit, as the curtain closed. End of show. Nice. He’d also be concealed by the smoke machines and the intense fog that bubbled up from stage hands dumping huge blocks of dry ice into buckets of water. If the prevailing winds permitted, this vapor would fill the entire stage.

To make the “flying” work, I brought in an “expert” who had flown Elton John and his piano into the air a few months earlier. This guy would harness himself to the wires connected to Gabriel via a truss. Then he’d climb to the top of a tall ladder on stage left out of sight and wait. On my cue, he would leap off the ladder and, because he was the counterbalance, up Gabriel would go. I did the cueing because I had no other real job, having finished my critical job of running around hallways closing doors so no breeze would alter the course of our stage fog! I sweated the cue because if I got it wrong, Peter would be mid-song and everything else would fall to shit.

Well, I thought I nailed it, but [on one particular night] I was maybe a second too soon, and all hell broke loose. Peter went up quickly and crookedly. His left shoulder was at least a foot and a half higher than his right. In his surprise, he dropped his microphone, launching it forward onto the stage, where it rolled into the explosions from the gunpowder pods, which sent the blast sound directly into the huge audience speakers. Lord knows how many of the punters, who had the misfortune to have been standing near them, are now deaf!

Meanwhile, some asshole had opened an outside door, so all my smoke was blowing backward towards the dressing rooms leaving the mayhem clearly visible. The flash pods (we were later to learn from the fire dept.) had been way overloaded, thereby becoming perhaps the first incident of actual cannon fire during a live show in the history of rock.

As my bad luck would have it, Peter’s mic sound also went through the band’s stage speakers and I saw out of the corner of my now tearing eyes that Tony Banks, the keyboardist, was in the center of the stage hitting Geoff Banks, the explosion roadie (no relation), over the head with a tambourine, screaming “I am deaf! You made me deaf!” All this happened within a nightmarish ten seconds.

So, to recap:  Gabriel’s nearly horizontal, fifteen feet in the air, with no microphone and a black cape dangling from his foot. The keyboardist is pounding a roadie as the hapless bastard is desperately trying to extinguish the residual smoke and flames still pouring from his canisters. The audience is in a state of stunned mass trauma, and I have smoke filling up the dressing rooms. So what was the absolute last thing this God could think of to do to me?

The front curtain would not close.

To their credit and to my abiding resentment, most of the audience hung around to watch us try to cut Peter down. It took such a long time!

Editor’s Note:  In the 1991 Documentary, Genesis A History, Tony Banks, Mike Rutherford and Phil Collins remembered it with a slight twist, Phil saying: “I turned around to the tour manager and said YOU’RE FIRED!” But Regis did, indeed, stay on as tour manager after this ignominious moment of rock history!