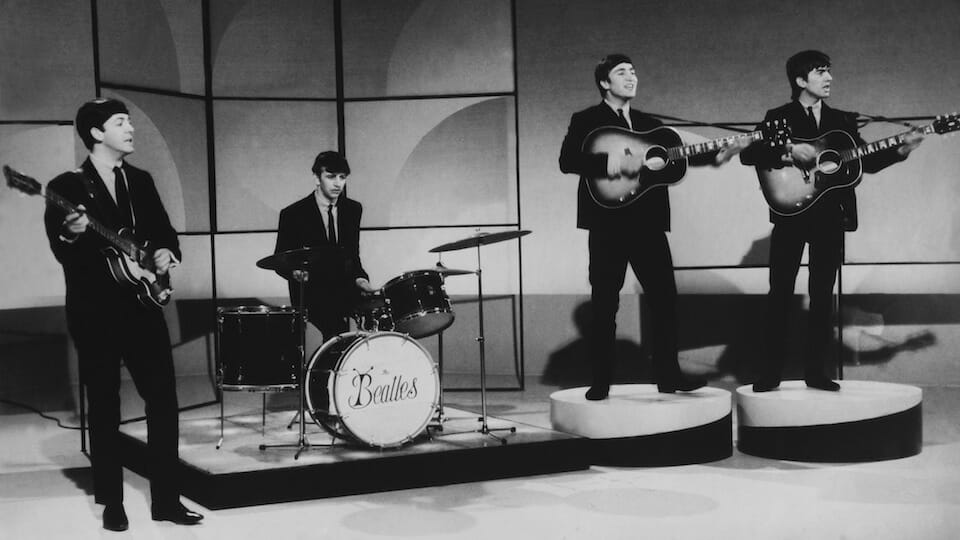 Ringo Starr- “The most momentous moment- that we had a record out, that we had a bit of plastic with us on it. My God, a record that you hadn’t made in some booth somewhere…. You don’t believe how great that was!”

60 years ago the Beatles released their very first single, “Love Me Do”, and the world was never the same. More pertinent, the release of this song changed the music industry in dramatic ways, ushering in the great era of the self-contained band. “Love Me Do” proved that acts can successfully sing and play their own written and recorded compositions. Up to this point, no artist had successfully attempted this simple, but direct, strategy before.

Written by Paul McCartney with help from John Lennon, the Beatles had initially recorded “Love Me Do” in June of 1962, as part of their “try-out” session with their new recording boss, producer George Martin. Three historic elements came out of the session:

Naturally, as a producer, George Martin was exercising what was the standard process for recording popular music up to that point in time. Most pop acts were selected by talent scouts or recording executives (usually being young and good-looking was the first qualification). They tended to be single singers like Adam Faith, Cliff Richards, and of course, Elvis. These acts would be coached to carry the tune that was selected for him/her to record. The song would be written by a professional songwriter, and its arrangement developed by the producer.  The recorded instrumentation would be performed by professional session musicians. Even the artwork for the record sleeve of the 45rpm disk would be determined by the recording company.

With their penchant for the unconventional, this standard recording approach would be blown up by the Beatles, starting with “Love Me Do.” They were initially handed the trite song, “How Do You Do It”, and asked to record it. The band (in particular, John) would beg, cajole, and take a stand for their abilities in writing and performing their own material. George Martin would eventually take their requests seriously. John would reflect years later, “They forced us to do a version of ‘How Do You Do It’. We wouldn’t let ‘em put it out. We said, ‘We’d sooner have no contract than to put that crap out’-all the tantrums bit. We thought it was rubbish compared with ‘love, love me do’. We thought ours had more meaning.” “How Do You Do It” went on to be a #1 hit for the fellow Liverpool band Gerry and the Pacemakers.

By the time the Beatles returned to Abbey Road studios in September, they had a new drummer named Ringo Starr in tow along with a new song, called “Please Please Me” (which would eventually become their first tune to go to #1). But first, they needed to finish the business of “Love Me Do.”

Never a big fan of the tune, George Martin made sure this would be a solidly played session by hiring a professional drummer, Andy White to record with the other three Beatles (White would later immigrate to live in Caldwell NJ in the late 80s and live there until his passing in 2015). This left poor Ringo, who was a member of the Beatles for just a few weeks, relegated to playing the tambourine on the track that ended up on the album version of the song. The good news for Ringo was that he was indeed the drummer for the track that ended up as the single.

The session would conclude with the Beatles creating the first real single to be fully self-performed and self-penned, thus becoming the first performers to present themselves as a self-contained unit. Going forward, all pop/rock acts would be called upon to play, sing, write, arrange, and develop their own public image for the next six decades. Indeed, the Beatles did it all first. (Additional factoid- “Love Me Do” was published as a McCARTNEY/LENNON composition, but the EMI disk printers made a mistake with everlasting implications, thus this record would be credited as LENNON/McCARTNEY, a practice never changed going forward).

So, what was the fate of the “Love Me Do” single? This mid-tempo blues tune, (played with only acoustic guitars) whose main hook was a harmonica theme played by John Lennon, had the odds stacked against it. History shows that the big four UK record labels of the early 60s (EMI, Decca, Pye, and Philips) on average, would release 128 singles a week in hopes that something would stick in the listener’s ears and sell enough to make money. How would “Love Me Do” get played on the radio or even get noticed enough so that the record would not drown in the sea of new materials?

The Beatles had one inside advantage going for them- the band was truly developed from the grassroots. They were not contrived or “discovered’ by a fast-talking entertainment scout, as was the conventional way of talent development.  Rather, the Beatles had been playing the long nights in various venues in Liverpool since 1958. This hard work paid off, as they became the first act in UK history to already have a big following BEFORE their first record was released.

Therefore, once the fans in their hometown city of Liverpool were notified that the Beatles had a record out, they bought the single in droves. This bounced “Love Me Do” into the top 50 upon the first week of its release. The single would soon go national and climb to its high point of #17. “Love Me Do”– the little song that could- stayed on the charts for an unheard of 18 weeks, just long enough to meet up with the Beatle’s next release, the blockbuster “Please Please Me,” in the early months of 1963.

This lofty level of record sales created a lot of rumors and accusations that their manager Brian Epstein, (through the buying power of his several record shops in the northern province), was mass buying units of “Love Me Do” to impact the song’s chart position. History has shown there is little-to-no evidence of such a strategy by Epstein. It is far more plausible that the rabid fans in their home city were buying multiple copies of the record…some purchasers have subsequently been interviewed over the years to claim that they didn’t even own a record player at the time.  It didn’t matter, to have and own a Beatles recording was the point.

Although the industry didn’t know it then, the release of “Love Me Do” stands as a tectonic shift in popular music’s development and approach. The music world owes a lot more to the Beatles than just thanks for their great tunes; they also created a platform for others to expand the boundaries of creative art.

24 comments on ““Love Me Do”: The Birth of the Self-Contained Band”