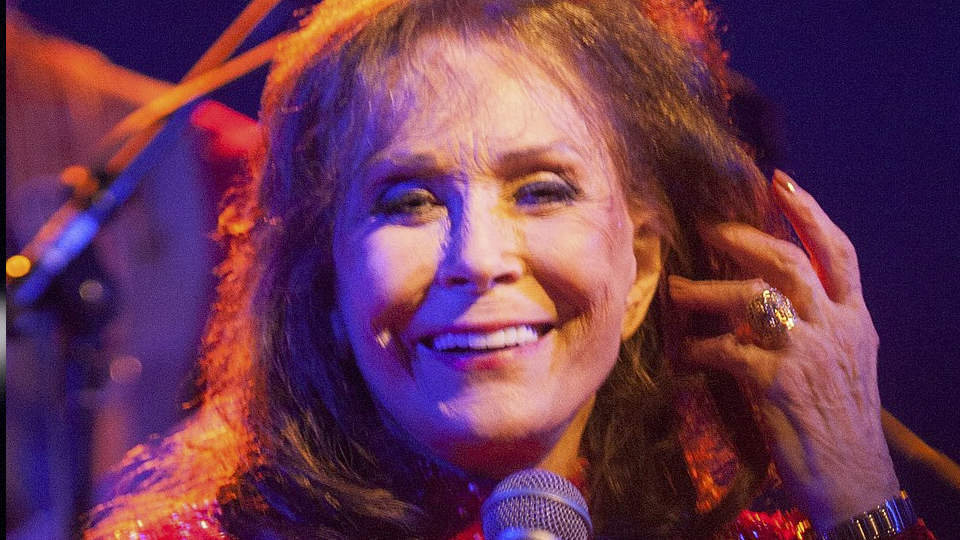 She hated being called a feminist and had no use for “women’s lib” – but Loretta Lynn, who just passed away at 90, did more to give a voice to ordinary women than many artists of her time.  Hers was a voice and viewpoint borne from a gritty, hardscrabble life where women – especially those from rural areas like the Kentucky “holler” she hailed from – were simply expected to endure. A lot.  The frilly long dresses she wore on stage masked a woman with a spine of steel.

Married at 15 to a man she’d only known for a month, Loretta settled into life with her rowdy husband “Doolittle.” He cheated on her, drank too much – but he also believed deeply in her innate talent. On their anniversary in 1953, he gifted her with a $17 guitar. As she learned to play it and began writing songs, “Doo” unfailingly supported her, driving to local honky tonks and radio stations around the country (clocking 14,000 miles on their car) to promote her earliest records. In the meantime, Loretta was also being a mama to their four (later to be six) kids. Talk about multitasking.

She often said that the constant support he gave her was the key to the longevity of their turbulent marriage. She described the relationship as “one of the hardest love stories.”  “He never hit me one time that I didn’t hit him back twice.”

During her career, Lynn wrote over 160 songs and released 60 albums. Outside of her famous partnership with Conway Twitty, she wrote about the burdens of endless pregnancies (“One’s On The Way”) and the blessed flipside when oral contraceptives gave women some of their freedom back (“The Pill”).

Loretta knew all too well that Doo cheated on her, but theirs was a bond she was willing to fight for – hard. “You Ain’t Woman Enough (To Take My Man)” and “Fist City” had her drawing a line in the sand, daring the hussy to cross it.

But there were also conditions for the straying hubby: “Don’t Come Home A-Drinkin’ (With Lovin’ On Your Mind)” and “Your Squaw Is On The Warpath Tonight” made it clear that she had some rules of her own.

Songs like these told the stories of women who didn’t lead privileged lives and were focused on what was in front of them: home, husband, kids, and real-life resiliency.  It’s no surprise that she had 24 Number One singles and won three Grammys.  But Loretta turned her keen eye to other issues of the day, including the Vietnam war (“Dear Uncle Sam”) and the double standards for divorced women (“Rated X”).

Loretta Lynn was pretty much the first female Country artist to write her own songs; even her close friend Patsy Cline didn’t have that opportunity. Contemporary artists like Brandi Carlile have noted Loretta’s powerful influence in that department.

Despite being the most awarded female artist in Country music, Loretta was willing to step out of the box. In 2004, she worked with Jack White of The White Stripes on the criminally underrated album, Van Lear Rose. In 2016, Elvis Costello joined her on the album, Full Circle.

True to her hardworking roots, Lynn toured for an astonishing 57 years until a stroke, and later, a broken hip sidelined her permanently. But for nearly six decades, her frank stories depicting real life shone a light on the rest of us.

Now that she’s gone, we can only hope that whoever was manning the Pearly Gates on October 4 greeted her with her signature stage entrance: “Will you please make welcome, the First Lady of Country Music.” Rest easy, Miss Loretta.

0 comments on “Loretta Lynn: Songs for The Rest of Us”