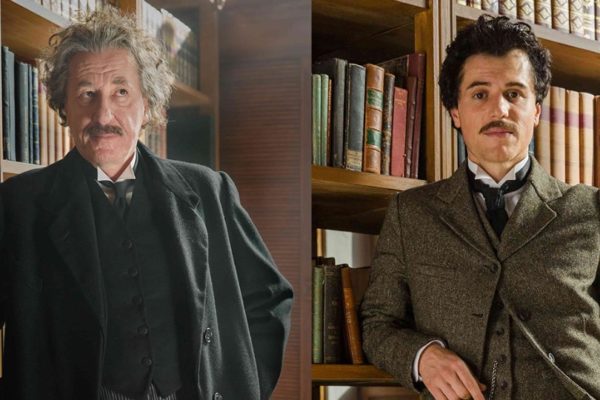 Neither a documentary nor dry, NatGeo’s Genius takes a surprisingly entertaining look at the life of Albert Einstein, academia’s brilliant bad-boy. Based on Walter Isaacson’s lengthy biography Einstein: His Life and Universe, the series spends a lot of time on the iconic scientist’s drama-filled personal life including his battles with anti-Semitism and his romantic infidelities. As you’d expect, Genius showcases the scientific advancements made by Einstein (played by Johnny Flynn as a young man and Geoffrey Rush when older) and his contemporaries — and to its credit does so without boring us all to tears. More surprising is the amount of screen time devoted to the women in his life, who are struggling to break out of traditional gender roles of wife and mother in the early 20th Century.

Anti-Establishment Maverick
Remember the white-haired Albert Einstein from your high school science classes? Well, you’ll actually see scant few scenes of him in the first half of Genius’ 10-episode Season 1 which primarily flashes back to the physicist’s early life. At this point in time, Einstein is a rebel refusing to fit into any mold as he battles the scientific rank and file. His single-minded focus earns him a great many critics which in turn contributes to a crumbling personal life. This is not a portrait of a brainy hermit! As this less familiar side of the brilliant man behind the theory of relativity, Johnny Flynn (Lovesick) excels at playing the mix of intelligence, wonder and frustration that typifies Einstein’s early days and often results in conflicts and strained relationships. Those tensions last well into the Nobel laureate’s later years and the impassioned performance of Geoffrey Rush (The King’s Speech) as the elderly Albert fighting J. Edgar Hoover and the anti-Communist hysteria makes for compelling viewing as the series progresses.

Tainted Love
“Behind every great man is a great woman” goes the old maxim but in Einstein’s life there were actually a few. In particular, Genius Season 1 follows his relationship with first wife Mileva Maric (Samantha Colley), a fellow physicist who is at a professional disadvantage simply because of her sex. (The men don’t just shun her but actively try to block her efforts to finish her degree.) Her tenacity, however, is one of her attractions to Einstein. She, for her part, is taken in by Einstein’s wide-eyed idealism and wonder. Things sour once Mileva realizes that her husband’s first cousin Elsa (Emily Watson) is not a friend but a lover. That he’s basically a deadbeat dad doesn’t help matters either.

Feminism at the Forefront
A subplot features Marie Curie (Klára Issová) and her husband Pierre (Corrado Invernizzi) who worked together on landmark studies involving radiation. What’s beautiful about this story is Pierre was nominated for a Nobel Peace Prize but refused the nomination until Marie’s name was included on the entry. This serves as a heartbreaking contrast to the Einsteins’ story as Albert and Mileva, although collaborators, were not presented as such to the world. In truth, Albert never gave Mileva the proper credit for her help in his work and the writing of his papers. Well at least he was one of the first to befriend Marie Curie when the science establishment snubbed her for her extramarital affairs. Given his patronship of smart women and underdogs, his shortchanging his wife is an unfortunate fact. Given that Picasso is the subject for Season 2, matters are unlikely to get better for the ladies next year.

0 comments on “With “Genius,” NatGeo Shows Einstein Behind Closed Doors”