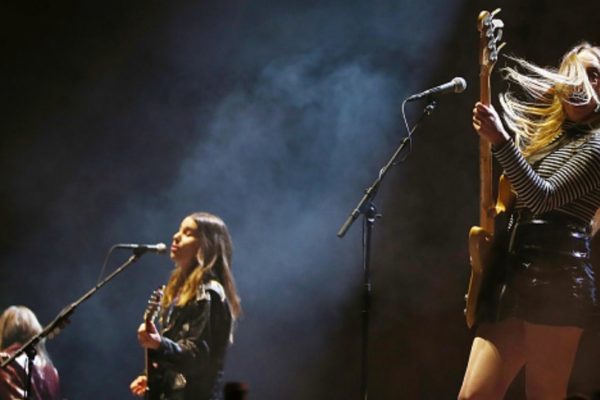 What do you do when you suffer heartache? Take a long walk on the beach? Scream at the moon? Eat a gallon of ice cream? Me, I do all three — often at the same time. HAIM, on the other hand, channels that feeling into an emotional yet solid album of which you should take note. HAIM (pronounced “HIGH-em”) consists of the three Haim sisters from Los Angeles — Danielle (guitar and lead vocals), Alana (guitar and keyboard) and Este (bass) — plus keyboardist Tommy King and drummer Jody Giachello when they’re playing live. The band came crashing through pop music’s front door with their 2013 album Days Are Gone, and an ultra-catchy tune entitled “The Wire,” which lifted a drum riff from the Eagles’ “Heartache Tonight” while simultaneously referencing the Family Matters theme song in its structure. (It’s true!)

Their new album Something To Tell You contains eleven songs that explore the aftermath of broken relationships as well as the isolation that comes from touring. But it’s not all sadness and tears. To the contrary, a good number of the songs are catchy and up-tempo. With harmonies as tight as other sibling acts like the Osmonds and the Jacksons, HAIM can sound akin to Wilson Phillips, just with choppier phrasing and deeper lyrics. Want to hear a bit before you commit to buying the whole album? Start with “Little of Your Love,” easily the album’s best song, a poppy tune with some interesting noodling on guitar and their signature drippy-smooth harmonies. Just be forewarned: The line “gimme just a little of your love” may plaster itself to your cortex and hold on tightly for days.

Ready for a little more? Take a listen to “Want You Back,” the radio hit that’s backup is stripped down to basically clapping, snapping, a drum thump, and a stark bass synth. In it, Danielle’s commanding vocal gets a nice lift from sisterly harmonies on the refrain which, like “Little of Your Love,” is easily memorized before you’ve even heard the song to completion.

Moving along… You know you want to. And here’s what’s next: “Ready For You” with a plucky, arpeggiated bass line that promises a partner that they’ll be treated to some ‘60s R&B style soul. You’ll definitely be hooked by this solid hook if you’ve come this far.

You’ve already purchased the album by this point, we’re guessing, but can we talk about “Nothing Wrong” and its spooky, breathy bridge? Enhanced by some Steve Winwood-style keyboards, this song has an upbeat feel that’s a nice contradiction to what the accompanying words portend.

Let’s just keep talking about the album, now that you’re a fellow fan. “You Never Knew” could have been a Fleetwood Mac song in the 1980s, with its requisite flowy foreground, plucky bass, guitar licks, and breathy harmonies. The song’s focus on the difficulties of touring may not be something you’ve experienced yourself but there’s a universality in the pain that comes from being away from your loved ones, isn’t there?

“Right Now” starts with a haunting minimalist organ that builds into a wall of angry sound, as if it were mocking a lover about all those false promises and repeated betrayals. A spoken interlude drives home the point: “Somehow it’s so clear to me now. What’s that sound? That’s you fading away.” Very powerful lyrics.

The last song on the album “Night So Long” — it was bound to come eventually — is a mournful one. Running three minutes long, the lyrics conclude with lines like “in loneliness my only friend” and “the nights here and I say goodbye to love once more.” But this isn’t goodbye really. Not really. Because now you’re ready to listen to it all again.

According to the band, the songs “Nothing’s Wrong,” “Something To Tell You,” and “Found It In Silence” are a trilogy chronicling the collapse of a relationship and then the recovery. There’s something ambitious and welcome in seeing an up-and-coming, potential super-group gain traction over what is ultimately a series of concept albums that are not only musically adept but also reflect a distinct voice. As a whole, even when viewed on its own, Something To Tell You provides an emotional journey that stirs feelings linked to past loves then emerges with the strength that comes from healing. You owe it to yourself (and your past loves) to check it out!

0 comments on “How to Get Hooked on HAIM”