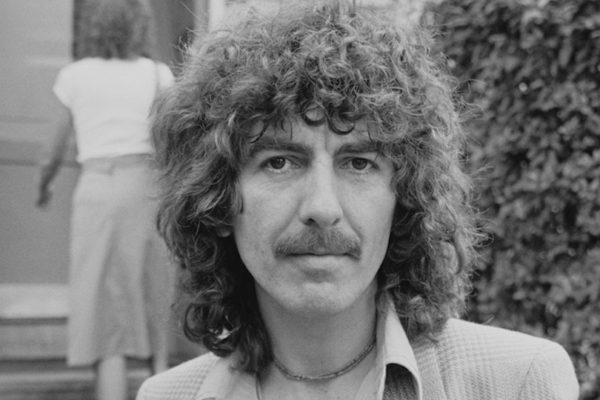 Listeners who are newly acquainting themselves with George Harrison’s rich solo catalog will generally exalt his 1970 triple-disc debut All Things Must Pass, for its sheer magnitude and overt spiritual themes. But the true Beatle Geeks among us know better. 1987’s Cloud Nine is the album that fully evokes everything we love about George: his singular artistry as a songwriter and guitarist, his deep spirituality and playful humor, and his love and loyalty to a tight circle of friends and collaborators. Produced by ELO mastermind and future Traveling Wilbury Jeff Lynne, Cloud Nine sounds and feels as fresh today as it did thirty years ago.

George returned from a five-year recording hiatus wanting to avoid “all that banging and clattering” of synthesizers and drum machines that permeated pop records in the ‘80s. He insisted on playing with a real band, so he and producer Lynne oversaw a core group of familiar faces: drummers Jim Keltner and fellow ex-Fab Ringo Starr, keyboardist Gary Wright, and George’s old pal Eric Clapton who contributed some meaty lead guitar. Percussion sizzle was added by Ray Cooper, a longtime member of Elton John’s band who also brought his boss along for the occasional piano track. This rhythm section rocks hard, and you can feel how much fun George and his mates are having on rockers like “Wreck of the Hesperus,” “Fish on the Sand” and “Devil’s Radio” (the latter featuring some rollicking Elton piano and searing Clapton solos). If you watched George’s appearance on the 1987 Prince’s Trust concert and thought “These guys should make an album together,” this is that album!

Cloud Nine contains a fair sprinkling of Lynne’s patented ELO-style ear candy, appearing and disappearing with just enough frequency to keep things interesting. But as an astute Beatles disciple, Lynne also understood George’s genius as a guitarist who could craft unique parts that define a song. (Think of the descending line at the end of the choruses on “Help!”) George-lovers can rejoice as Cloud Nine is brimming over with vintage Harrison “riff-age,” from the stately 12-string dominating “Fish on the Sand” to the tasty low-register fills punctuating “This Is Love,” as well as plenty of George’s beautiful slide guitar gently weeping throughout the album. His spine-tingling solo on the gorgeous ballad “Someplace Else” alone justifies Lynne’s assessment of George as “the king of rock and roll slide guitar.”

At the core of Cloud Nine is the depth of George’s songwriting. The rockers of George’s generation entered middle age in the 1980s with unrealistic expectations from both the industry (to stay relevant in the marketplace) and the public (to maintain the “hope I die before I get old” ethos of the ‘60s). But George boldly disregarded everyone’s expectations, and Cloud Nine is the mature portrait of a 44-year old rocker aging gracefully and enjoying life on his own terms. On “Wreck of the Hesperus” he compares himself to blues singer Big Bill Broonzy and the Eiffel Tower (!), and on “That’s What It Takes” he insists that “If we got to be in this life forever, then we’d better be taking all the chances.” His well-documented spiritual pursuits seemed to have finally brought him some peace and happiness; while many of his previous LPs were marked by heavy-handed sermonizing and religious iconography, by the time of Cloud Nine he chose to drop subtle spiritual messages through an occasional lyric (“This Is Love” celebrates “…the power provided, free to everyone”).

He was also finally comfortable enough with his storied past to look back at it fondly. On the delightful Beatles send-up “When We Was Fab,” George and Lynne (and Ringo) go to town with swirling cellos, sitars, and drum fills straight outta Pepperland. It’s hard to believe that more time has now elapsed since the release of Cloud Nine than the mere twenty years that separates it from Sgt. Pepper. But whereas All Things Must Pass was George’s effort to escape The Beatles’ shadow, Cloud Nine is a timeless, inspired celebration of a visionary artist at the peak of his creative powers. It’s too easy to consider Cloud Nine one of the best Beatles solo albums; IMHO it’s simply one of the best rock albums of any era.

PS. Our list of a few underrated Harrison songs,  Plus, some of our favorite Beatles books.

9 comments on “Did George Harrison Surpass “All Things Must Pass”?”