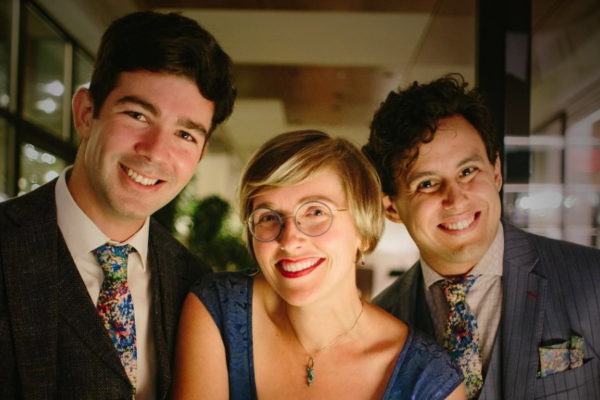 Think you can’t make a living as a poet? Don’t tell that to The Haiku Guys + Gals, an inventive collective of versifiers who have been booking events all over the world for their unique brand of instant poetry. They’ve brought their typewriters and imaginations to events sponsored by everyone from Lululemon to SundanceTV to the Royal Palms Shuffleboard Club; in the process they’ve cranked out witty haiku on everything from politics to the weather to fright flicks. The core talent and co-founders — Lisa Ann Markuson, Erick Szentmiklosy, and Daniel Zaltsman — also happen to have a new book out that may inspire you to write some haiku of your own: 102 Haiku Journal: 17 Syllables to Say It All. But before you start exploring whether you’re a 21st century Matsuo Basho, let’s learn a little bit more about these three and their literary livelihoods.

Q: You recently toured Europe. What were some of the highlights of that trip? Did you write in other languages?

A: Europe was fantastic, and we had performances in London, Paris, Berlin, Madrid, Barcelona, and Vigo Spain. For us, the most wonderful thing overall is that every time we go into a new “market” or culture we want to be sensitive to how new demographics, languages, and societies will react to the poetic experience we offer. And every culture does it a little differently, though we find more and more proof that this is a truly universal artform that crosses all walls and brings everyone together. And a highlight for me (Lisa Ann) personally was that I was the feature poet at the Kerouac Vigo Poetry and Performance Festival, and it was my first time getting to read a full set of my original work on stage, and much of it in Spanish!

Q: Your writers pool extends well beyond the three of you. How many people are a part of the Haiku Guys and Gals?

A: We have 27 poets all across the major cities of the US, plus Montreal and Paris! And we travel the entire world for performances. We have poets that speak English, French, Spanish, German, Italian, Russian, Swedish, and a small smattering of Chinese and Japanese. And we have poets of all disciplines and backgrounds too – we’ve really grown into a group that can see from every angle.

Q: What’s the strangest or least expected or funniest or most surprising (pick one) place you’ve been invited to write haiku?

A: Strangest — Dallas, Pennsylvania. We were running late for a wedding and we pulled over by a random barn to change into our suits and suddenly realized we were in direct sight of the entire wedding reception seated outside.

Least Expected — We were invited to do a huge party for a financial firm: the only catch was that they wanted everything to be themed for the Museum of Natural History. So we dressed as paleontologists and did it in style.

Funniest — We did a celebrity birthday party in a vault in the financial district! So glitzy.

Most Surprising — A bat mitzvah for the daughter of a huge music executive at Sleep No More.

Q: You’ve just released the book 102 Haiku Journal: 17 Syllables to Say It All. As we move into holiday season, who is the perfect recipient of this gift?

A: There are two major demographics we think this book is perfect for. If you’re a person who feels a lack of creativity in your day-to-day life and wants an outlet for that energy, without a huge time commitment or overwhelming project, this book offers bite-sized moments to reflect and get creative and see your world in a new way. If you’re a person who has an interest in poetry and writing, but has found it hard to find a place to start, this book gives you the guidance and permission to start writing your own poems. And we think we’ve done a good job of writing something that can be enjoyed by almost all ages — probably 12 and up, I’d say.

Q: I understand you have an archive of all the haiku your collective has written so far. Can you give us an idea of the scope?

A: 25,000 most likely in our archives. We’ve probably done more, but some always escape into the ether…

Q: How soon into writing haiku at various functions did you see that this had the ability to evolve into full time jobs? What was the turning point?

A: Day One! Seriously, from the minute we saw the reaction people have when they receive their poem, we knew this had infinite potential.

Q: Bob Dylan won the Nobel Prize for poetry last year. If you could write a haiku for Dylan, what would it be?

Stop mumbling, no
one understands you bro – give
It up already

No, but in all seriousness, this is a great question. Here’s another version:

The self, and truly
The words that we need to hear
That the world should heed