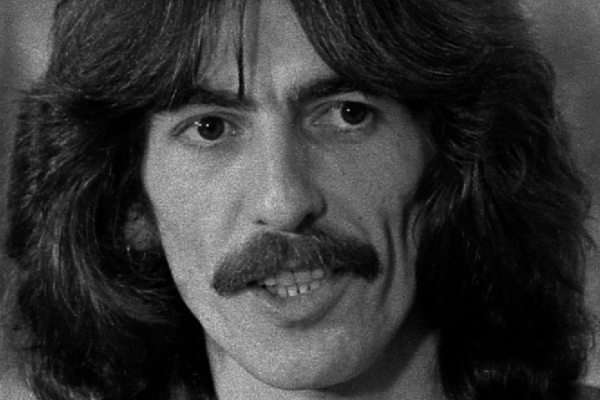 George Harrison was one of the most famous musicians of the 20th century. Even my eldest son, born three years after Harrison’s untimely death, knows who he is without paying much attention to The Beatles’ music. To almost everyone, he is known for his work with The Beatles, his most successful solo albums (All Things Must Pass, Living in the Material World, and Cloud Nine), and for his association with South Asian spirituality and music. He is largely responsible for the fact that Westerners know the name Ravi Shankar, and thus at least partly for our familiarity with the sound of the sitar. Perhaps lesser known is his wide network of musical and artistic friendships, and the crucial encouragement and assistance he gave to some of the greats.

If you ever watch Harrison’s interview with Dick Cavett from 1971, you can see his gracious humility under pressure, and his generosity of spirit towards his colleagues. These qualities are confirmed by those who knew him best, and who benefited from his way of lifting up the artists around him.

Tom Petty: “(Harrison) was the kind of person that, when he came across a good thing or the potential for a friend, he really was aggressive about it. And he had a way of knocking out anything that was extracurricular, or in the way of what was really going on. He could get you comfortable with him very quickly.”

Bob Dylan: “He was a giant, a great, great soul, with all of the humanity, all of the wit and humor, all of the wisdom, the spirituality, the common sense of a man and compassion for people. He inspired love and had the strength of a hundred men.”

Both Petty and Dylan were part of the Traveling Wilburys, Harrison’s late 80s brainchild, along with Jeff Lynne of ELO, and Roy Orbison. Jeff Lynne remembers Harrison saying, “we should have a group.” Lynne thought he wanted to recruit some sidemen, but Harrison had a bigger vision, and mentioned Bob Dylan first. The Wilburys had two moderately successful albums, but the relationships formed and deepened through the group accomplished far more than that.

Dylan and Petty were both at a low ebb in the late 80s, and Roy Orbison was a pre-Beatles memory to most. All three found their musical journeys drastically revitalized in the late 80s, and this is no coincidence. Petty’s subsequent hit album Full Moon Fever was produced by Lynne, and utterly transformed his sound and his range of material. Roy Orbison’s amazing comeback was cemented with the album Mystery Girl, featuring the smash hit “You Got It,” co-written with Lynne and Petty.

Bob Dylan wrote in his autobiography about the encouragement he received from Harrison, and while he was traveling a musical path ultimately less suited to George and Jeff’s production style, and took longer to find the next commercially successful phase in his career, it’s clear that his long friendship with Harrison had a huge impact. Harrison recalled his time writing with Dylan during the 1970 All Things Must Pass sessions: “I was saying to him, ‘You write incredible lyrics,’ and he was saying, ‘How do you write those tunes?’ So I was just showing him chords like crazy. Chords, because he tended just to play a lot of basic chords and move a capo up and down.” How much did George influence Dylan’s classic 70s albums? Hard to say, but it is worth noting that these records have a much larger harmonic palette than Dylan’s prior work.

Billy Preston is another great musician whose career got a serious leg up from his friendship with Harrison. George left the Let It Be sessions in frustration, and made Preston’s involvement and unprecedented album credit a condition of his return. Harrison went on to produce Preston’s first two truly successful albums, That’s the Way God Planned It and Encouraging Words, and also contributed to later projects.

Did I mention Monty Python? George Harrison was instrumental in the funding and distribution of Python’s early films, when they had great difficulty finding backing. He mentions them in the Cavett interview, before they were much known in the US, saying “you should get them here.”

George Harrison will probably always be known best as the Beatle who didn’t write as much as John and Paul. But in truth, he was a major figure in 20th-century popular culture, whose enthusiasm, passion and generosity had ripple effects from which we all benefit. A great artist with a big heart.