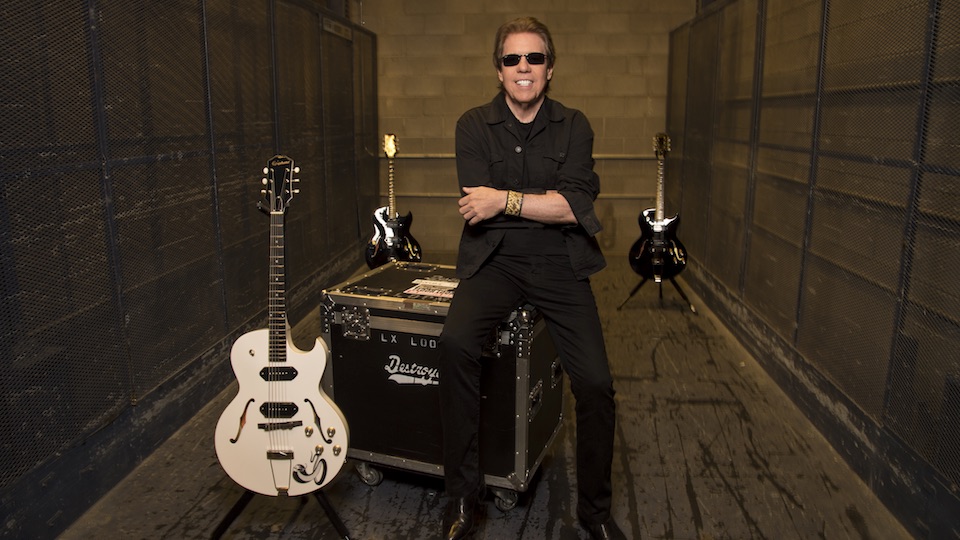 In the late 1970s, George Thorogood was blistering the airways with his boogie-blues musical style, a combination of the Bo Diddley shuffle and slide power chords. Since then he (with his band, The Destroyers) has released sixteen studio albums, with combined sales of over 15 million LPs. His music is a combination of power, attitude, and talent while owing its pedigree to the classic blues riffs.  His songs have found their way into movies and commercials, and tracks like “Bad to the Bone” are forever part of pop culture.

Thorogood was originally from Wilmington, Delaware but later called Boston his home. He had a relatively quick rise to fame, forming a band in 1974 by joining with childhood friend and drummer Jeff Simon, friend Michael Levine on bass, and later with saxophonist Hank Carter. Within a few years of starting the band, he gathered his group (initially called “The Delaware Destroyers”) and began recording and releasing albums. Hits like “Move It On Over,” a Hank Williams’ cover, and “Who Do You Love?” (originally by Bo Diddley) were released in 1978 and 1979, respectively. By 1981 he was touring with the Rolling Stones and in 1982 he was the featured act on Saturday Night Live. In 1985 he was playing Live Aid alongside his hero, Diddley.

One iconic story about Thorogood dates back to 1978 when he and his band were in Georgetown (D.C.) playing across the street from the Nighthawks’ band, featuring Jimmy Thackery. He and Thackery had been friends for years and had supported the other in touring and shows. In this case, they had pre-arranged a unique stunt. Both bands, at the same time, started playing the classic Ellmore James tune “Madison Blues.” As the guitar solo approached, Thorogood and Thackery each left their clubs, met in the middle of the street, switched guitar packs, and took over for the others’ band. This locally became known as the “The M Street Shuffle.”

And while that’s a pretty unique thing to do, George and his pals decided on something even more challenging. After opening for the Stones for a few weeks in 1981, he decided to attempt to play 50 shows across 50 states in 50 days, one in every state, calling it his “50/50” tour. The band converted a Checker Taxi into space for sleeping and headed off to complete this challenge. The only places they were forced to fly to were Alaska and Hawaii but, in the end, they exceeded their target by playing 51 shows, including playing one show that had already been booked with the Rolling Stones.

But let’s rewind to 1982 after he had completed his “50/50” tour. On November 23, the band played to a packed audience at Boston’s Bradford Ballroom (now the Royale Nightclub). George and the Destroyers ripped through all of his biggest hits including his original hits “Kids from Philly,” “Bad to the Bone,” and “Miss Luann.” There were blues classics (John Lee Hooker’s “One Bourbon, One Scotch, One Beer” and Elmore James’ “The Sky Is Crying”), early rock ’n’ roll and R&B covers (Chuck Berry’s “No Particular Place to Go” and Bo Diddley’s “Who Do You Love?”), and a few country tunes that The Destroyers had already made their own (Hank Williams’ “Move It on Over” and T.J. “Red” Arnall’s “Cocaine Blues”). And the whole event was captured on a high-quality recording by the award-winning engineer Guy Charbonneau.

That recording has been newly remastered by Grammy Award-winning engineer Paul Blakemore and will be released by Craft Records on December 18 in a four-LP set on 180-gram vinyl, along with a CD offering and an online streaming option. 1800 units of a special deluxe edition pressed on red-marbled vinyl with a unique poster and extended liner notes was released to record stores on December 11.

As has been the case for a number of years, a portion of proceeds from his tours are donated to the Leukemia & Lymphoma Society. As George once noted, when he was a kid, he remembers hearing Robert Kennedy’s famous quote “Some people see things as they are and ask why. I dream things that never were and ask why not?” He still feels that if The Destroyers can help make a difference, he wants to be there.