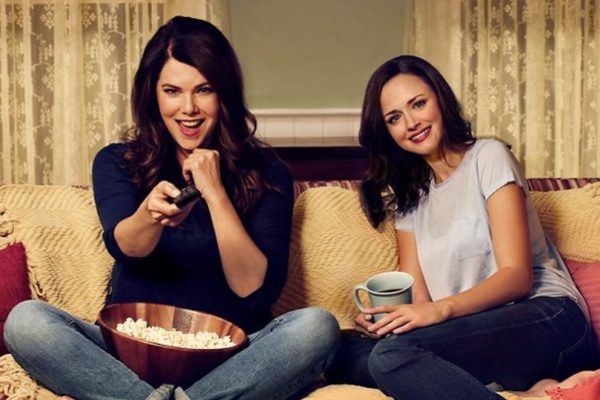 Gilmore Girls is returning to television for the first time since 2007 and you don’t have to be a girl with a quick wit to get excited for its reboot. In case you forgot, this is the show which might be best referred to as “the love child of My So-Called Life and Northern Exposure.” It’s probably also that show that your college girlfriend watched obsessively, then you secretly watched it in your dorm room after you broke up. Forget the ridiculousness that was Fuller House. This is the smart, clever family reunion that you’ve been waiting for on Netflix. For any guys who didn’t have a girlfriend to turn them on to this show 15 years ago, here are five reasons why you should start watching it now.

Contrary to the poor advice given to Rory in Season One, boys do like funny girls. In fact, they can’t get enough of them and Gilmore Girls caters to men who adore witty women. Years before New Girl, Inside Amy Schumer and The Mindy Project, Lorelai and Rory were cracking us up with whip-smart observations and wry one-liners. Sure, the series forced us to look up the meaning of the word “odious” (just double-checking, of course) but more often the central mother-daughter duo were entertaining us with Mamet-esque banter with a little less crudity and plenty of endearing references to Abbott and Costello, the Ernest movies and the like. Hey, where else could you hear a classic barb like “Oy with the poodles already.”

Sure, the opening theme song is by Carole King, that master of tugging on heartstrings, but when Lorelai first appears in Luke’s diner, it’s the indie classic “There She Goes” by The La’s that we hear. Better yet, the characters in the show’s town of Stars Hollow have great taste in music, from PJ Harvey to the Pixies. To their credit, Rory and Lorelai  judge people on their musical taste (or lack thereof). That’s a trait most men can get behind! Lorelai even once told Christopher (Rory’s father) that she couldn’t marry him because his favorite band is The Offspring. What guy wouldn’t be smitten with a woman who knows that Metallica rocked so much harder? Plus, Rory’s best friend Lane is so music savvy you’d think she’d been plucked out of High Fidelity. Who can forget the time she played the drums for a garage band doing a punk cover of the theme to The Greatest American Hero? That’s Wayne’s World-level cool.

Another thing that sets the Gilmore Girls apart is the ease in which Lorelai and Rory toss around pop culture references from the ‘80s and ‘90s. (And this was pre-Google!) Lorelai raised her daughter on TV and movies, good and bad, so they can namedrop the Farrelly Brothers and Anne Heche or deep dive into John Hughes movies and Def Comedy Jam without breaking a sweat. They also earn our respect for pointing out the misunderstood genius of Godfather 3. As present-day Sofia Coppola fans, we must agree.

Who can’t relate to a screwed-up family? Why feel shame? We’ve all got them and there’s not a girl or a guy who can’t relate to a stoic grandparent or the awkward comedy that comes with extended family get-togethers. Yes, Lorelai and Rory have a loving relationship. Yes, they talk about everything with each other. No, they’re not part of some idealized brood. In the first few seasons, you could practically cut the tension between Lorelai and her uptight mother, Emily, with a knife. But your hand would be shaking with laughter when you did so.

Oh, the late, great Edward Herrmann! He plays the Gilmore patriarch, a stoic, bow-tie-loving insurance salesman who you may recognize as the father figure of another clan, the vampires in the ‘80s teen classic The Lost Boys. He’s secretly who we’d want to play in the show, the guy who gets to sit there with a glass of scotch in the background while listening to all the repartee from the cast of talented women.  But since that’s not about to happen…

We’re going to grab a cup of coffee and tune in to Gilmore Girls: A Year in the Life for the four 90-minute episodes now that they are finally on Netflix. Hell, who are we kidding? We were already watching all the old episodes in anticipation. Just like that old college girlfriend, we forgot how much we missed Gilmore Girls until they suddenly showed up again.