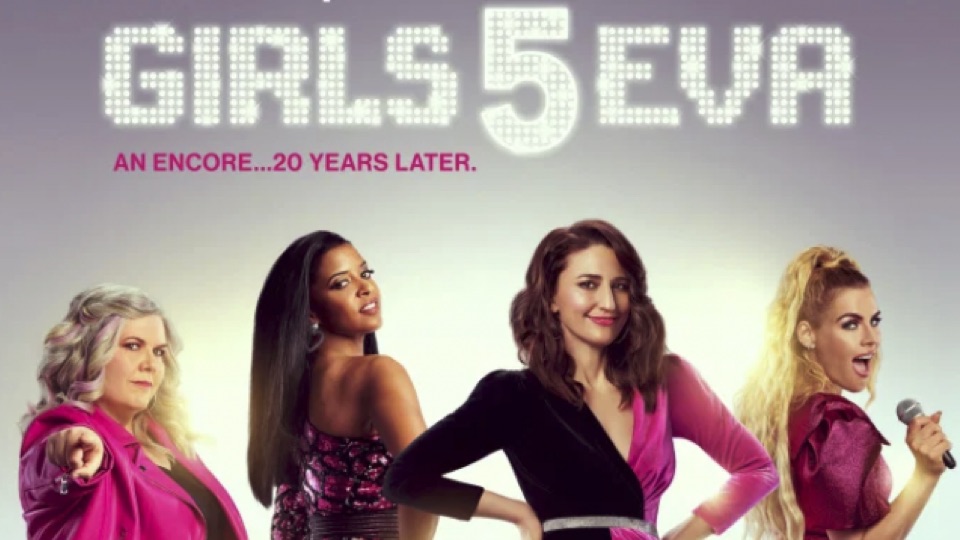 Imagine if the Spice Girls tried to launch a comeback, but one member had passed away, another had decided to pursue dentistry, yet another was working in her brother’s pizza restaurant, the fourth was living an LA lifestyle with a former “boy band” husband and the fifth worked the tarmac at an airport?  That’s the premise behind a surprisingly successful series debuting on the new Peacock Network and it’s definitely worth a look.

The series was created by Meredith Scardino (Unbreakable Kimmy Schmidt, The Colbert Report, Saturday Night Live) who has the writing creds to keep the jokes coming in this combination send-up and tribute. And consider the formidable cast: Sara Bareilles (“Love Song”, Waitress) plays Dawn, the Girls5Eva member who has since settled down, works in a pizza place, and has a family.  Renée Elise Goldsberry (Hamilton, The Good Wife) plays Wickie, the fierce diva of the group who is now the airport employee. Paula Pell (SNL writer) plays Gloria, who has since come out as a lesbian, become a dentist, and settled down (and then divorced) her wife.  “Busy” Phillips (Freaks and Geeks, Dawson’s Creek) plays Summer, the “hot one” of the group that leads a vapid LA lifestyle as an at-home mom, married to Kev (Andrew Rannells of The Book of Mormon, Hamilton, and Hairspray) and pre-teen daughter Stevia. And Ashley Park plays the now deceased band member who died in an unfortunate pool accident (“she swam off the end of an infinity pool”). The show is bursting with strong character actors, the script is tight, and they riff on each other effortlessly.

Did I mention the dialogue zips at high speed?  Turn on subtitles to catch all the quick takes on everything from celebrity TikTok ridiculousness, pop music celebs, trendy clothing, AirBnb, reality shows, TRL, MTV Cribs, TV music competitions, music events, and celebrity agents. And speaking of celebrities, there are plenty of cameos. Tina Fey (SNL, 30 Rock), who is one of the executive producers, appears in an episode doing a very good impression of Dolly Parton, providing emotional support to Sara Bareilles to write a catchy (but otherwise filthy) song.  Singer/actress Vanessa Williams plays a cutthroat world-famous talent agent with only a few minutes for anyone ever. Stephen Colbert shows up as Alf Musik, a Swedish music producer who wrote Girls5Eva’s one hit.

The short series starts with eight episodes, each about thirty minutes long so it’s easy to breeze through them quickly.  In the pilot directed by Kat Coiro (Brooklyn 99, It’s Always Sunny in Philadelphia), budding rap musician “Lil Stinker” is looking for a good sample to use in his latest song “Line Up” and his producer stumbles upon an old Girls5Eva hit from the 1990s called “Famous 5Eva.”  When Stinker is asked to perform on Jimmy Fallon (another cameo), the remaining four members of Girls5Eva show up and provide a live backup.  This generates renewed interest in the girl group, which causes them to consider uniting and options for performing again.

Season One takes us through this journey of revived interest and the challenge of writing new material, as their old songs would be considered inappropriate.  Examples of some vintage Girls5Eva songs include “Dream Girlfriends” (“We’re dream girlfriends, ‘cause our dads are dead / So you never have to meet them, and gеt asked why you left school”), “Judas and Jesus” (“We’re the cool kind of Christians who wear sneakers and compare the Bible to characters from ‘The Office”), and “Planes”, a song released just before 9/11 with the unfortunate lyric “Quit flying planes at my heart.”  The songs were not good, though they had good hooks.

This brings me to the music in the show. The songs are clearly professionally written and quite good, despite the outrageous lyrics.  Nearly all are performed as flashbacks to the group’s original 90s performance as part of some music video.  Paula Pell’s character “Gloria” is the only one who is played by a different actress in the flashbacks, with Erika Henningsen in that role.  The other actors play their younger selves, with Ashley Park as now-deceased member Ashley.  At the end of each episode, one of the songs featured is played with subtitles so you can appreciate the entertaining lyrics that it contains.

Toward the end of Season One, the girls meet with pressure to perform independently or to take on other roles (such as being a host on a TV music competition that combines singing and fighting – “American Warrior Singer”).   But the season ends on a perfect high note and even drops an unexpected teaser.

The show holds 100% approval on Rotten Tomatoes and is currently available on Peacock, yet another streaming offering – this one related to NBC content.  It’s free if you watch archival content or network shows like Fallon.  The first episode of Girls5Eva is free and then if you want to watch the rest of the series (and have access to other paid content), it’s $4.95 per month (includes some commercials).  But if you’re into catchy music, and a perfect take on the idiocies of modern culture, it’s a tiny price to pay.