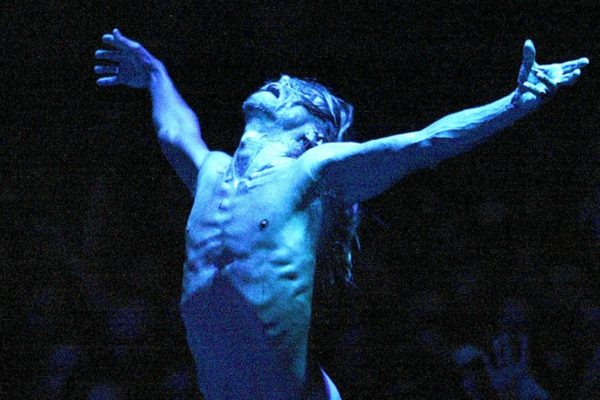 1977 is commonly called the “Year Punk Broke.” While New York and London bands shook things up for a full year or more prior to that, ’77 really was when mainstream press got wind of it all and helped make the nose-thumbing and the noise go worldwide. Clearly, though, the movement’s roots go back much further. For instance, ’60s garage rockers like The Monks and The Sonics steadfastly stuck to three chord ferocity, even as rock started to get more ambitious and grandiose. But among the individuals that helped spark the revolution, who deserves the title Godfather of Punk?

Pete Townshend
Andy Summers of The Police once called Pete Townshend “the original punk.” The Who’s Townshend-penned songs “I Can’t Explain” and “My Generation” perfectly capture teenage angst and not only helped birth the mid-’60s mod movement in England, but influenced a slew of British punks a decade later. Even The Sex Pistols’ Johnny Rotten, famously disdainful of The British Invasion’s old guard, acknowledged Townshend and The Who’s influence. (Townshend actually considered Rotten for the role of mod Jimmy in 1979’s Quadrophenia). Pete’s sneering attitude and guitar smashing bravura earn him a spot on any list of punk godfathers.

Joey Ramone
The scuzzy, street gang threads The Ramones’ rocked in 1974 — leather jackets, ripped jeans and Chuck Taylors — are so ubiquitous now you can find them in any high-end shopping mall, alongside studded necklaces and, well, Ramones T-shirts. But during the height of mid-’70s high-heeled excess, four degenerates from Queens playing stripped-down, skull-crushing rawk in torn jeans and sneakers was nothing short of a revolutionary moment. Overnight, Joey and his mates made all those flares-wearing wankers playing Bach-inspired solos seem woefully out of touch. And the noise reverberated all the way from the Bowery to Bromley.

Lou Reed
Lou Reed’s tales of dope fiends, drag queens and dominatrixes, delivered with the knowing cadence of a guy who’d been there, simultaneously made Velvet Underground too dangerous for mainstream sensibilities but perfect for the kinds of outsiders who tend to form punk bands. Bob Dylan’s mid-’60s oeuvre challenged his contemporaries to push beyond simplistic and predictable lyric writing. But with songs like “Heroin” and “Venus in Furs,” Reed went even further to smash pop conventions, and punks, goths and artists of all stripes have mined that territory ever since. Throw in an irascible and intimidating interview style and the fact that he released Metal Machine Music when he could have just kept churning out Transformer 2, 3 and 4 and Reed’s punk “cred” is unimpeachable.

Iggy Pop
Self-laceration, self-destruction, stage diving, crowd surfing and crowd taunting. Often fueled by a potent mix of drugs and drink, Iggy took Jim Morrison’s Dionysian daredevilry and debauchery to (il)logical extremes. The former Stooges frontman’s moments on and off stage are legendary: the time he antagonized a Detroit biker gang from the stage of a Stooges gig in the early ’70s, then jumped down into the crowd and promptly got decked by one of the bikers. That other time he threw a watermelon rind into the audience and knocked a female fan unconscious. Or when he single-handedly invented ccrowd surfingand the fine art of peanut butter chest smearing or pioneered rock and roll scarification, absentmindedly gouging himself with a broken drumstick. The Stooges were loud and in your face and Iggy’s antics were so over the top he redefined where the “top” was. It became a template for The Ramones, The Sex Pistols, The Clash, The Buzzcocks, GG Allin and countless other pretenders to the throne ever since.

Verdict:  While all those mentioned are worthy contenders and Lou Reed, especially, comes closest to deserving the moniker, ultimately, Iggy wins the title of Godfather of Punk by a nose (ring). These days, any malcontent in a leather jacket and torn jeans can acquire the look of punk credibility. Let’s face it, even “Iggy Pop” is Jim Osterberg’s invention. But at some point, though, the dividing line between Jim and Iggy became nearly indivisible. Iggy is less a carefully cultivated persona than he is a hard fought way of life, one permanently scarred into a bare and sinewy chest.

3 comments on “Will the True Godfather of Punk Please Take a Stage Dive?”