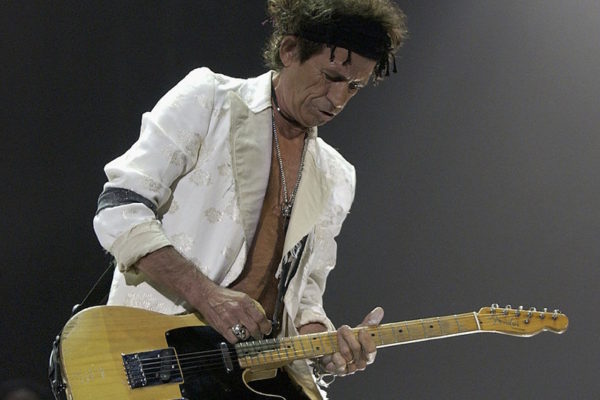 The guitar is organic to rock and roll but which rock songs have the strongest presence of that signature instrument? Author Michael Rays has been asking himself that very question over a highly entertaining and unique series of e-books entitled Number One with an Axe. The third book in the series (which now covers the ‘50s and ‘60s in their entirety) came out earlier this week and once again Rays took a closer look at some of the seminal work of the Stones, The Beatles and The Byrds. And before you start asking “Where’s Jeff Beck?” or “Where’s Dick Dale?” take note: Neither had a hit make it to the very top of the charts during this stretch of time.

Q: In your Number One With an Axe series of books, you rate songs based on four guitar components: riffage, rhythm playing, fills, and solos. How did you come up with that criteria?

A: I wanted a simple scoring system using the fewest criteria possible that still covered all the ways a guitar can be used in a song. Early on, I thought about adding “tone” and “effects,” but I felt tone was too subjective, and there were too many songs that simply don’t use any effects. If a song features a killer guitar tone or a cool effect, I write about that in the comments section — but it doesn’t receive a numeric score.

Q: The current book is your third in the series and you’ve now investigated all the number one hits from the ’50s and ’60s. What single year was the best for the guitar? What are some of that year’s highlights?

Q: If you were to pick the top three guitarists from those two decades who might they be and why?

A: I have to start with Danny Cedrone, whose incredible solo on Bill Haley & His Comets’ “Rock Around the Clock” in 1955 set the standard for all who would follow. (Sadly, he died from falling down a stairway before the song reached number one.) Next comes Keith Richards, for whom I have a new appreciation after writing this book. He got so adventurous in expanding what it means to be a rhythm player — but it’s also the ‘just right’ feel of his lines; he always served the song. On tunes like “Satisfaction” and “Honky Tonk Women,” he creates amazing counterpoints to Mick Jagger’s vocals; the result is a textural richness that only the Stones could claim at that point. To pull that off and still have those songs hit number one is quite a feat.

Only one left — and we still have Scotty Moore, James Burton, John Lennon, George Harrison, Roger McGuinn and Robby Krieger…not to mention a bunch of unheralded session players. (Gulp!) I’ll go with Scotty Moore. It’s not his fault he got caught up in the Category 50 Hurricane that was Elvis Presley. All Scotty did was play solid rhythm lines and workmanlike solos; he also helped forge the “great singer/great guitarist” template that would become the cornerstone of all great rock bands.

Q: What about The Beatles? Which Fab Four song has the greatest guitar playing in your opinion?

A: The Beatles drove me crazy as I listened to all 18 of their number one songs of the ’60s. Amazingly, only ONE of them featured all four of my criteria (riff, rhythm playing, fills, solo). That song is George Harrison’s “Something,” and it’s one of the precious few songs of the ’50s or ‘60s to score 30 or more points out of 40. Does it feature The Beatles’ greatest guitar playing? Among their number one hits, I think so. Harrison’s solo is excellent (I scored it a 9) and the other guitar elements are solid as well; it’s just a great song with lots of wonderful guitar parts.

Q: Is there a particular song you re-encountered in your latest book that you feel is unjustly forgotten today and ripe for rediscovery and covers?

A: There are several. One is from 1965: “I’m Henry VIII, I Am” by Herman’s Hermits. Most people remember this tune as an annoying novelty number, but give it another listen: it’s really a surf-rock gem with some slick chord progressions (though disguised with goofy lyrics). The guitar solo is top-notch, and it’s not by some session hotshot: it’s the Hermits’ own Derek “Lek” Leckenby, and it’s a classic example of how to dress up a solo with double-stops (playing two notes at once).

Another is 1967’s “Ode to Billy Joe” by Bobbie Gentry. She lays down a very tasty acoustic groove in this country-ish blues song, and I could see a cover band taking it in any number of directions: rock, punk, speed metal, funk, almost anything — just be sure to keep a groove!

Q: Do you have a favorite song that features no guitar at all?

A: Great songwriting and execution can overcome any obstacle — even, shockingly, the complete absence of guitars. Some of my axe-free number one favorites from the era are Elvis Presley’s “Teddy Bear” (1957), Danny & the Juniors’ “At the Hop” (1958), and Bobby Darin’s “Mack the Knife” (1959). From the late ‘60s, I like the Young Rascals’ “Groovin’” (1967). I wouldn’t change a thing about any of those songs.